AMC Entertainment Group (NYSE:AMC) the big movie-theater chain that shut down when the coronavirus pandemic struck, probably will show signs of continuing struggles when it reports third-quarter earnings next week. .

Although it has since reopened nearly all its theaters, and folks are coming back to watch films on the big screen, attendance is still well below pre-pandemic levels. That is making it hard for the company's return to profitability. 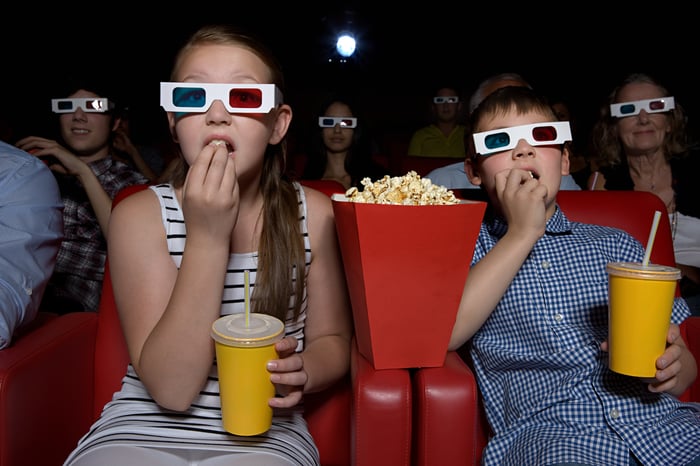 In the three months ended June 30, AMC's sales were $444 million, a huge improvement from the $18.9 million in the same period last year. Billions of doses of COVID-19 vaccines have been administered, and people are more comfortable visiting theaters. That's an improvement, but it is still not enough.

In its most recent quarter, expenses far outstripped revenue, leading to a net loss of $344 million. Management has tried to lower spending and conserve cash, but the company's high fixed costs are difficult to whittle down. For instance, rent expense stays more or less the same whether revenue rises or falls.

Stopping the cash drain could give AMC time for attendance to recover as infection rates decline. Although the world has made significant progress against COVID-19, the virus remains in circulation, and it is likely to keep some customers away from theaters. Indeed, according to data from Comscore, box office revenue for the theater industry in 2021 is running 70% behind that of 2019. To get back on a sustainable path, AMC needs to get revenue closer to 2019 levels of $5.5 billion. To get an idea of how far behind it is, in the six months ended June 30, AMC had just $593 million in revenue. The result is that with each passing quarter, it will continue bleeding cash, eating into dwindling reserves.

AMC had the good fortune of being part of the so-called meme-stock buying frenzy earlier this year. The shares are up more than 1,000% year to date, which allowed the company to raise cash by selling equity. But AMC has maxed out that capability. At the end of June, the company had a cash balance of $1.8 billion.

Analysts expect AMC to report revenue of $720 million and earnings per share of $0.55 for the third quarter. If AMC hits the revenue estimate, it would still be less than the second quarter's $740 million in operating expense. That's not even accounting for the increase in film exhibition costs as attendance rises. Still, it would be a vast improvement -- a 62% increase -- from the second quarter.

This poses a dilemma for investors. AMC's stock price by almost any measure is divorced from the company's fundamental performance. Although the stock has had an amazing ride, it can't last forever. At some point, AMC is going to have to put up results that justify the stock price.