The company has multiple deals in place that would give it a significant footprint in the U.S. pot market -- once it is fully legal.

Cannabis producer Canopy Growth (CGC 1.95%) has always been one of the more aggressive companies in Canada with respect to U.S. expansion efforts. A few years ago, it made headlines when it announced the acquisition of multi-state operator Acreage Holdings -- a deal that remains pending while the federal ban on pot in the U.S. is still in place.

But Canopy Growth sees a lack of legislation as just a temporary obstacle. Canopy Growth continues to wheel and deal, and in October, it announced yet another key acquisition that it hopes will make it a top cannabis company in the U.S. market. 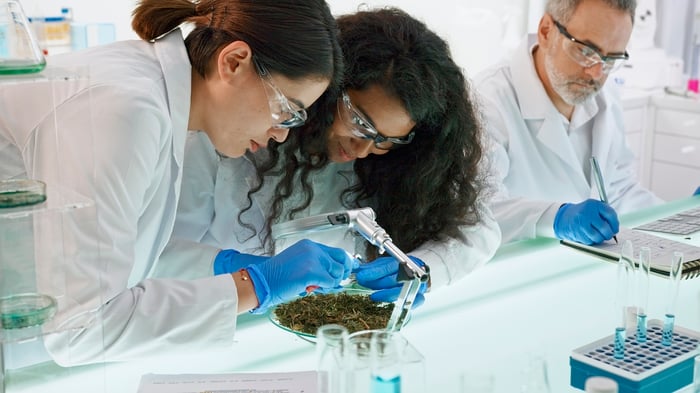 Canopy Growth wants to buy cannabis edibles maker Wana Brands. In the press release announcing the deal, Canopy Growth calls Wana the "#1 cannabis edibles brand in North America," noting that it has a footprint in 12 states today. However, with additional licenses, that number could grow to 20 by the end of next year. The company also sells its products in Canada (where edible cannabis products are legal federally).

But Canopy Growth can't buy the business just yet. And so it has settled for purchasing the right to acquire the business (i.e. call option), "upon federal permissibility of THC in the U.S." To enter into the agreement, Canopy Growth will make an upfront payment of $297.5 million. And until it actually acquires Wana, the edibles maker will remain independent and Canopy Growth will have no control or voting interest in the business.

The acquisition of Wana could prove vital to Canopy Growth's expansion plans in the U.S. It would certainly help complement its plans to acquire Acreage Holdings upon legalization. Potentially having a top brand like Wana in its portfolio would help give Canopy Growth an excellent position to build from once the U.S. market opens up. Even before this deal took place, Canopy Growth already looked to be in the best position among Canadian cannabis companies to dominate south of the border.

It all continues to go back to timing. The key question that investors don't have an answer to right now is: When will Canopy Growth actually be able to finally make a a move on its deals with Wana and Acreage? That's the big unknown. If you were to believe CEO David Klein, less than a year is how long it may be before the company is in the U.S. But the reality is that it could take much longer than that. Accepting uncertainty is a pre-requisite for investors who buy shares of the company today.

Should you invest in the marijuana stock?

Canopy Growth does look to be a promising marijuana stock to invest in over the long term. The problem I see with the business is that it is focusing perhaps too much on the U.S. market. In the shorter term, there could be some real pain ahead for investors. Analysts are losing hope in this money-burning business and have recently downgraded the stock.

Over the past 12 months, the company has used up 513 million Canadian dollars just from its operating activities. And if not for the billions it has in cash and short-term investments on its books (thanks to all the investments beverage company Constellation Brands has made in the business over the years), there's no way the company would be able to sustain this level of cash burn.

But instead, Canopy Growth remains focused on the U.S. while its core operations are in disarray. Sales have declined for two straight quarters, and with gross margins of less than 20%, profitability remains a long shot for the company.

As tempting as it may be to buy and hold the stock, this isn't a suitable investment unless you're willing to take on significant risk. Although the acquisitions in Acreage and Wana may pay off in the long haul, investors need to also consider that the landscape in the U.S. marijuana industry could change by the time pot is legal federally, and these opportunities may look a lot different (and potentially less exciting) years down the road.