Amazon (AMZN 3.04%) generated a staggering $443 billion in revenue on a trailing-12-month basis through the second quarter. The e-commerce giant has growing operations in such diverse fields as transportation, advertising, cloud services, and entertainment -- and that's just skimming the surface.

If I had to put all of my available cash in one stock, I can't think of a better vehicle to protect and grow that money than Amazon. It probably has as wide of a competitive moat as any business in the world, and when we look at where the company was seven years ago compared to today, there's a good chance Amazon's moat is going to widen even further over the next decade. 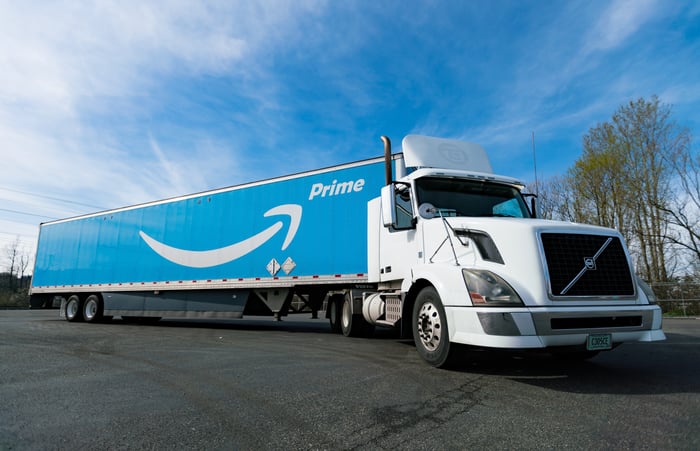 The Amazon flywheel is kicking into high gear

Amazon is still primarily an online retail business. Revenue from online stores made up 51% of Amazon's total sales in 2020, but over the last seven years, around half of Amazon's sales growth has come from non-retail sources that were generating very little revenue in 2014.

Higher-margin revenue from non-retail categories -- such as third-party seller fees, Prime subscriptions, "other" (advertising), and Amazon Web Services (AWS) -- generated 45% of Amazon's total revenue in 2020, up from 23% in 2014. Along with that increase, Amazon's profitability has soared, which should continue to improve as management keeps investing behind these growth drivers. 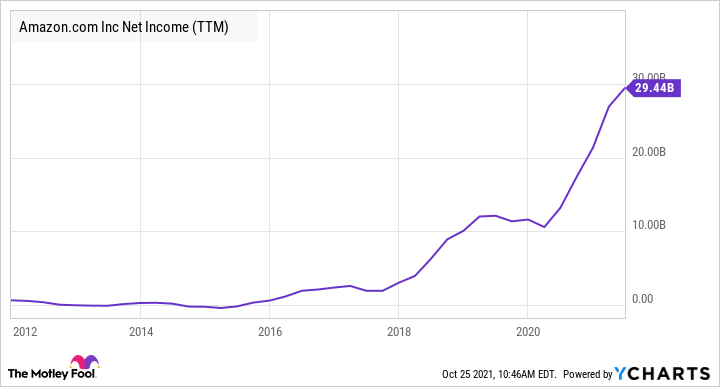 Amazon appears to have a lot of room to keep growing these smaller but more profitable areas of its business. For example, CFO Brian Olsavsky said during the second-quarter earnings call that Amazon's advertising business is "innovating at a fast clip, launching over 40 new features and self-service capabilities in the quarter, making it easier for sellers, companies, and authors to grow their businesses by helping customers discover their brands and products."

Amazon reports its advertising revenue under the "other" category, which grew 83% year over year in Q2.

Of course, things like advertising and third-party seller services only exist because of the hundreds of millions of customers that shop at Amazon. While Amazon last reported having more than 200 million Prime subscribers earlier this year, its actual global customer base is likely at least double that. One analyst estimates there are probably as many as 600 million Amazon customers in total, but it's those Prime members that really expand Amazon's competitive moat.

What's most exciting is that Prime memberships are still growing: Amazon reported adding 50 million new members since the start of 2020. This is causing Amazon to continue investing in infrastructure and technology to meet demand. On a trailing-12-month basis, spending on capital expenditures and finance leases grew 74% year over year compared to the prior trailing-12-month period.

Amazon can grow for a long time

Amazon is a large business, but the $4.9 trillion global e-commerce market is still expanding faster than brick-and-mortar retail sales. The retail side of Amazon should be able to grow for many years. That should lift its profit margin even higher, since growth in the retail business will continue to attract more advertisers and third-party sellers that want their products in front of a growing number of Prime shoppers.

With the addition of Amazon's fast-growing cloud services business, where AWS contributes most of the company's operating profit, growth investors can kill many birds with one stone here. Amazon is a great investment that I plan to hold for a long time.