Google, Facebook, Zoom, Apple, and Peloton should watch their backs.

Staying ahead of Google in the smart home market

Amazon and Alphabet's (GOOG -3.09%) (GOOGL -3.01%) Google currently lead the U.S. smart speaker market. Amazon's Echo devices controlled 69% of the market in June, according to CIRP, while Google's Home devices claimed 25% of the market.

To maintain that lead, Amazon expanded its Echo lineup again with the Echo Show 15, a 15.6-inch smart screen which can be mounted on a wall like a digital photo frame or small television. 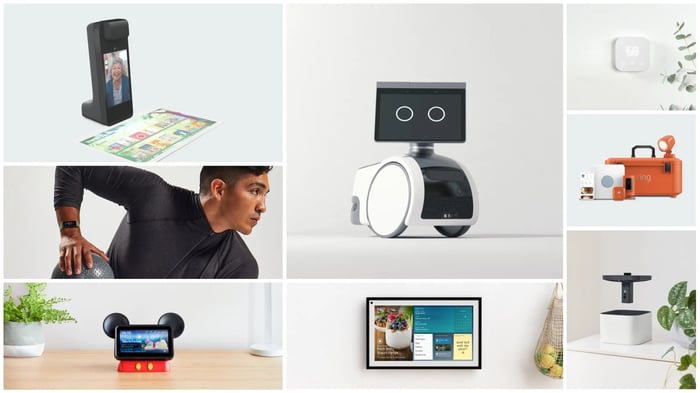 Amazon even introduced a new Alexa-powered home robot, Astro, which can provide home security, check in on family members and pets, and provide the same services as its Echo devices on the go.

All those devices -- along with Amazon's existing foundation of other Kindle, Fire TV, and Echo devices -- give it a firm foothold in the expanding smart home market, which Markets and Markets expects to grow at a compound annual growth rate (CAGR) of 10.4% between 2021 and 2026. But more importantly, those devices will tether even more consumers to its e-commerce marketplace and digital services.

Amazon's Echo Show devices already compete against Facebook's (META -7.04%) Portal devices and Zoom Video Communications (ZM -2.08%) for video calls, but Amazon's introduction of Glow, a teleconferencing device for kids, addresses a market which neither company has directly targeted yet.

Amazon Glow features a vertical screen and projects a 19-inch touch-sensitive play area onto a table. That projection can be used to remotely play games with the other person, or used to read books together or engage in other educational activities.

The Glow is still in experimental stages, but it could enable Amazon to carve out a niche in the crowded video conferencing market -- something its enterprise video platform, Chime, has failed to do thus far.

Taking on Fitbit, Apple, and Peloton in connected fitness

Lastly, Amazon updated its lineup of Halo fitness tracking devices and apps which launched last year. It introduced a new Halo View band, which adds an AMOLED color display while removing the microphone which sparked privacy concerns in the first version. Like Google's Fitbit devices and the Apple (AAPL -3.08%) Watch, the Halo View tracks a user's heart rate, skin temperature, steps, and other data.

Amazon also rolled out two new subscription-based health services, Halo Fitness and Halo Nutrition, which will join Fitbit Premium, Apple's Fitness+, and Peloton's (PTON -4.53%) All-Access plan in the crowded connected fitness market. Shares of Peloton, which had already tumbled more than 40% this year amid concerns about competition and a post-pandemic sales slowdown, continued to drop after Amazon's announcement.

Will any of these devices boost Amazon's sales?

Amazon generates most of its revenue from its retail business and most of its profits from its cloud platform, Amazon Web Services (AWS). Amazon doesn't disclose its hardware sales separately, and its new hardware devices probably won't significantly boost its revenues on their own.

However, Amazon's hardware business still indirectly boosts its revenues by locking more shoppers into its Prime ecosystem, which surpassed 200 million global subscribers earlier this year. Amazon can also afford to keep selling more hardware devices at low margins (or even losses) because AWS generates much higher-margin revenues than its retail business.

When Amazon plugs its hardware devices into its virtual assistant Alexa, its growing presence in smart homes, it massive online marketplace, and its sticky Prime ecosystem, they become crucial cogs within the Amazon machine that crushes smaller retailers and tech companies.