The social media and messaging company took a huge hit after releasing its third-quarter results.

It was a tough start to earnings season for social media investors, with Snap (SNAP 7.07%) stock plummeting after releasing its financial results for the third quarter. Revenue missed analyst estimates because of Apple's new privacy policies, causing the stock to drop over 25% after the report. Snap's revenue guidance for the fourth quarter was also much lower than what analysts expected, providing another negative data point that investors were likely not happy with.

While shareholders never like to see their investment shrink by 25% overnight, now could provide a buying opportunity for investors with a longer time horizon. With shares now trading at a discount, is now the time to buy Snap stock? 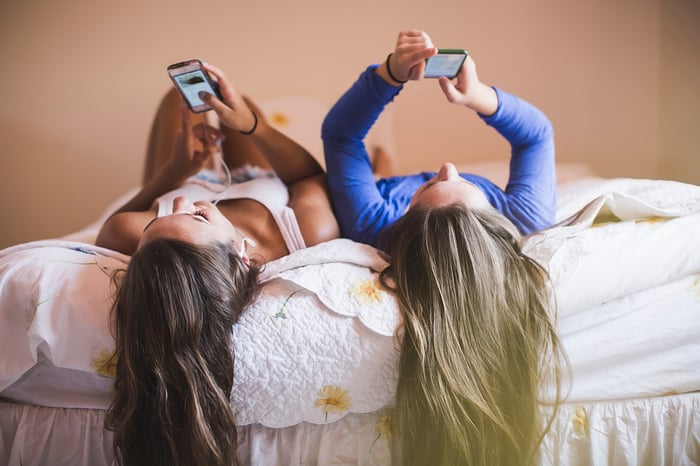 On its face, Snap's third-quarter results looked solid. Daily active users (DAUs) grew 23% year over year to 306 million, while average revenue per user (ARPU) grew 28% to $3.49. This led overall revenue to grow 57% year over year to $1.07 billion in the quarter. While 57% is a fast pace for growth, revenue was still less than the $1.1 billion analysts expected in the quarter, which is one reason the stock tanked so much on the news.

Snap is quickly growing in its Rest of World users, which is everywhere except North America and Europe. In Q3, DAUs hit 130 million in the Rest of World segment, up 49% year over year. This is important for Snap's future revenue growth, as its application is already pretty saturated in the United States. Plus, with Rest of World ARPU only at $0.98 in Q3 vs. $8.20 in North America, there is likely room to grow its monetization in the segment over time.

Snap is not yet profitable, with a net loss of $72 million in Q3. However, the net loss was a 64% improvement over the prior year. As long as the company keeps growing revenue and expanding its gross margin (which it did last quarter, from 58% to 60%), losing money is not a worry, but it adds another level of risk to Snap stock compared to a profitable social media company like Facebook.

Lastly, Snap gave out guidance for Q4 of $1.17 billion to $1.21 billion. It is never smart to read too much into guidance, but this number was way lower than the average analyst estimate of $1.36 billion, which investors were likely disappointed in seeing.

Don't get fooled by the huge price drop

The challenge with Apple's new privacy rules, which is the main reason Snap gave for missing on revenue and guidance, should get resolved in the next few quarters as Snap figures out the changes and recovers its targeting capabilities for advertisers. Snap also said it is seeing headwinds from advertisers due to the current supply chain problems, as companies don't want to advertise something they can't get into the hands of customers. All these outside issues should abate eventually, setting Snap's business back on its long-term trajectory.

If you take this at face value, then Snap stock would likely be a buy, as it's down almost 30% in a week or so. The problem is, even with this huge drop, Snap stock still looks overvalued. With a market cap of $88 billion and an expected $4 billion in revenue this year based on management's Q4 guidance, Snap stock trades at a price-to-sales ratio (P/S) of 22, which is expensive no matter how you slice it. Plus, with a gross margin of only 60%, it is unlikely Snap will get to the long-term profit margin of more mature internet/software businesses like Facebook, Adobe, or Autodesk, which would have made this 22 P/S a lot more palatable.

If you are invested in Snap or are thinking of purchasing shares after this price drop, you need to expect revenue to continue growing at a high rate and expect its gross margin to continue to expand, leading to high levels of profitability for Snap within the next three to five years. If you're not confident this can happen, you should avoid Snap stock and put your hard-earned money somewhere else.

Why Snap Stock Was Falling Today
401%