Do these recent high-profile stock market movers mean anything for your investment plan?

If you want to invest in the stock market, you're going to experience some ups and downs, especially lately. The CBOE Volatility Index (^VIX 0.05%) has risen over the past month, suggesting that investors are feeling antsy as we get deeper into earnings season.

Long-term investors shouldn't let short-term volatility influence their allocation decisions too much. Still, it's important to monitor and absorb new information as it comes out -- especially if a company's long-term operations might be affected.

These four stocks were some of the big names moving the market last week. 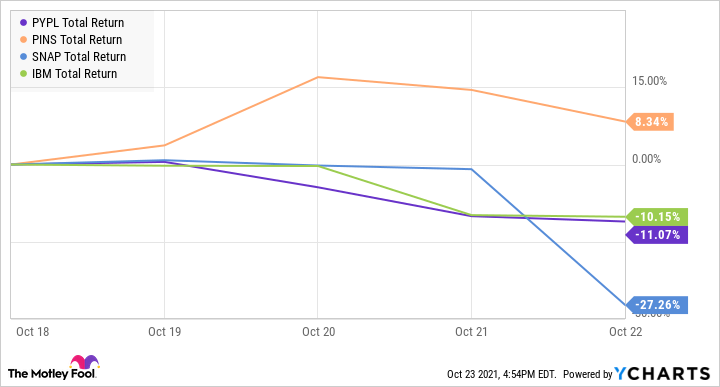 The stock price for social media powerhouse Snap (SNAP) fell 27% last week after a disappointing quarterly earnings report. During the company's conference call, CEO Evan Spiegel indicated that Apple's (AAPL -1.79%) enhanced privacy setting in the latest iOS adversely affected Snap's advertising business more than anticipated. Advertisers are no longer able to target ads directly to as many users, which ultimately reduces the number of marketing dollars that can flow to social media platforms like Snapchat.

Even in the midst of all this negativity, Snap's revenue still grew more than 50% year over year in the quarter, bringing the year-to-date growth rate to 77%. The company is also free-cash-flow positive, so it's not bleeding cash even if it's not reporting an accounting profit.

Snap is a high-growth company that operates close to breakeven, and its stock predictably trades at an aggressive price-to-sales ratio of 30. This was always going to be a volatile asset. From an investment standpoint, it's most appropriate for investors who wanted to take a long-term buy-and-hold flier based on Snap's market opportunity. This development might force investors to reconsider the stock's prospects, but it's hard to argue that the company should lose nearly one-third of its value in a week based on the news. Snap stock is still not "cheap" by any metric, so don't be shocked by more volatility if you take the opportunity to buy on the dip. 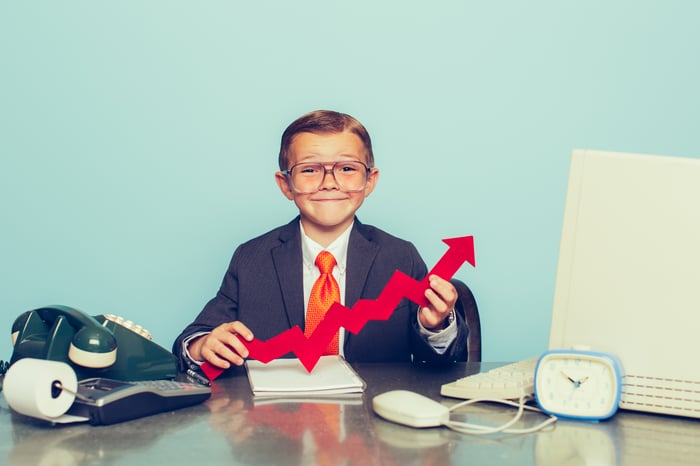 Share prices of IBM (IBM -0.56%) dropped more than 10% last week following a disappointing earnings report. Investors weren't forecasting much growth, but the company only reported a 0.3% increase in sales. That was $200 million short of consensus forecasts. IBM's more promising cloud and AI business segment also reported uninspiring improvements, expanding 2.5% over the prior year.

Growth is an important factor for ensuring shareholder returns, so this news can't be welcome for IBM investors. There's no clear growth catalyst here, even in the more dynamic business segment. The company fell short of expectations, which were very modest themselves.

All that said, the stock wasn't really priced for growth to begin with. These days, IBM is more of a dividend stock than a growth stock. IBM shares now have a forward P/E ratio of 10.7 and price-to-cash-flow of 7.2. Those are both exceptionally low in today's market. The stock also pays a hefty 5.1% dividend yield. The company has produced nearly $5 billion in adjusted free cash flow this year and paid out $4.4 billion in dividends. That results in a high payout ratio, which isn't sustainable forever. The market might be pricing in reduced or stagnating shareholder distributions over the next few years.

Ultimately, there's not much to love about IBM, but it's hard to say that a lot changed over the past week. This is a value stock, and buyers are betting on a turnaround that can improve the company's growth and profitability.

PayPal's (PYPL -3.73%) stock price dropped 11% last week as rumors emerged that it was going to acquire Pinterest (PINS 1.49%) for around $40 billion. If the rumors are true, it would be a huge deal that would fundamentally change PayPal's core business. This might seem like an odd move, but the fintech company is seeing more value in e-commerce capabilities among competition from Shopify and Facebook.

On Monday, PayPal management put out a statement denying the rumors of the takeover and the stock price bounced back up about 5% on the news.

Nothing has really changed about PayPal's long-term fundamental value, whether the acquisition was true or not. If you really hate Pinterest as an investment, then it might be time to sell PayPal shares. Otherwise, an 11% decline is a huge move based purely on rumors with no hard numbers to support such a change in valuation. The price recovery on Monday proved that point.

It wasn't all doom and gloom out there. Pinterest shares climbed more than 15% after the PayPal acquisition rumors surfaced. The whispered $70 per-share acquisition cost is a huge premium to Pinterest's current price, so investors would have been in line for a good payoff. However, Pinterest stock was down significantly from 52-week-highs of almost $90 a share before the rumors, so PayPal was still getting a bargain at the rumored offer price.

The stock price optimism tailed off later in the week, as Snap's Apple-induced struggles weighed on all the major social media stocks. Pinterest gave back almost half of the gains, but it was still up big for the week. On Monday, the PayPal statement caused the stock price to fall a further 14%.

Nothing changed over the past week with regard to Pinterest's fundamental business operations or outlook. Whether the rumor ends up becoming an actuality or not, it shouldn't factor into long-term allocation decisions. Pinterest is still trading at a significant discount if you are looking for a long-term entry point.

4 Stocks and Industries That Moved the Market in May

It's Official: These Are the 3 Most Ludicrously Overvalued Stocks on the Market
413%