The computer peripherals manufacturer has a bright future ahead despite near-term challenges.

However, higher costs weighed on Logitech's margins and bottom line. For the quarter, which ended Sept. 30, the company's adjusted earnings declined to $1.05 per share from $1.87 per share in the prior-year period. This was due to a jump in logistics costs, higher product costs, and an increase in promotional spending. 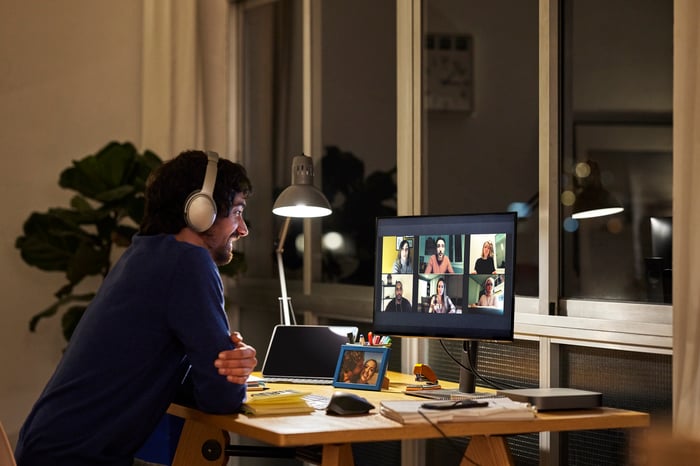 The earnings decline could add to the downward pressure on Logitech stock, which has dropped nearly 28% over the past three months. After the decrease, it became evident that tough year-over-year comparisons would bring an end to its days of rapid, coronavirus-fueled growth.

But Logitech's stock pullback makes it an attractive bet for new investors, who could take advantage of long-term tailwinds such as the increasing demand for gaming accessories. There's also the switch to a hybrid work model that involves more people working part of the time from home and remainder at the office, as well as the increasing adoption of online education. The company is still benefiting from these trends even with the lockdown phase of this crisis largely behind us in the U.S. -- a reality reflected in Logitech's latest earnings report.

Logitech's near-term results may lead investors to think that the company is struggling due to weaker demand. But in fact demand for its products is notably higher than in the pre-pandemic era. For instance, sales of its webcams have tripled in the past couple of years. What's more, its fiscal second-quarter revenue was up nearly 81% from the same period in its fiscal 2020, prior to the pandemic.

The company's revenue didn't drop off once the initial surge in coronavirus-driven demand slackened. It booked a slight year-over-year increase in its top line last quarter. Logitech has also maintained its fiscal 2022 guidance, which calls for revenues to be about the same as they were last year.

It's natural that its sales and earnings growth this year won't be as strong as they were last year. At that time people adjusting to a new world of social distancing bought significant amounts of equipment to help them work, study, and entertain themselves at home. However, the comparisons are likely to be somewhat easier in fiscal 2023, which begins in April next year. That would help Logitech get its top- and bottom-line growth back on track, as per analysts' estimates:

Logitech is in a solid position to achieve these long-term increments in its revenue and earnings as the trends kicked off by the pandemic are paving the way for a secular growth cycle for the company.

Research firm Gartner, for instance, estimates that remote workers will account for 32% of the global workforce by the end of 2021, as compared to 17% at the end of 2019. The U.S. and Europe will lead that charge. Gartner forecasts that 53% of the U.S. workforce will work remotely in 2022. While in the U.K., Germany, and France, remote workers will account for 52%, 37%, and 33% of the workforces, respectively.

Meanwhile, the market researchers at TechNavio estimate that revenues in the online education market could grow by $247 billion from 2020 through 2024. As a result, demand for computer peripherals such as keyboards, mice, and webcams can be expected to increase. Not surprisingly, TechNavio expects the PC peripherals market to add $43 billion in revenue across the same period on the back of the tailwinds discussed above.

Similarly, the use of video conferencing is likely to increase in education and the business world. One research firm estimates that the global video conferencing market could clock a 23% annual growth rate through 2027. And finally, the global gaming peripherals market is expected to hit $8.7 billion in annual revenues by 2027 as compared to $4.5 billion last year. This is thanks to the growth in the population of gamers as well as the rising popularity of esports.

It is worth noting that gaming, video collaboration, keyboards, and pointing devices (mice, trackballs, joysticks, etc.) were Logitech's primary sources of revenue last quarter. These segments together produced $988 million of the company's total sales of $1.3 billion. That was a 9% increase from an impressive prior-year period.

These businesses appear to have bright futures. Logitech looks well-positioned to deliver consistent growth in the long run, as it claims to be gaining market share in these verticals.

A few more reasons to buy

Logitech has a debt-free balance sheet and was sitting on $1.1 billion in cash at the end of last quarter, which should allow it to aggressively pursue the opportunities at hand. With that, management intends to boost promotional spending as well as its investment in retail point-of-sale marketing in its efforts to expand its market share.

Lastly, the stock now trades at just 14 times earnings -- a notable discount to its five-year average earnings multiple of 26. As such, investors looking for tech stocks that can deliver growth over the long run have an opportunity to buy Logitech on the cheap right now.