Kinder Morgan's 6% dividend yield isn't too good to be true.

Few things in life are free. But although Kinder Morgan (KMI -1.22%) costs around $17.64 per share at the time of this writing, its dividend could pay for the investment in less than 12 years, assuming you reinvest those payments.

Kinder Morgan's slow and steady business model is centered on creating shareholder value through dividends, not high growth. As with most dividend stocks, the success of that strategy will depend on whether the company can continue to fund and raise its payouts over time without taking away too much of the cash it requires to run its business. Let's see if Kinder Morgan fits this criterion and is worth buying today. 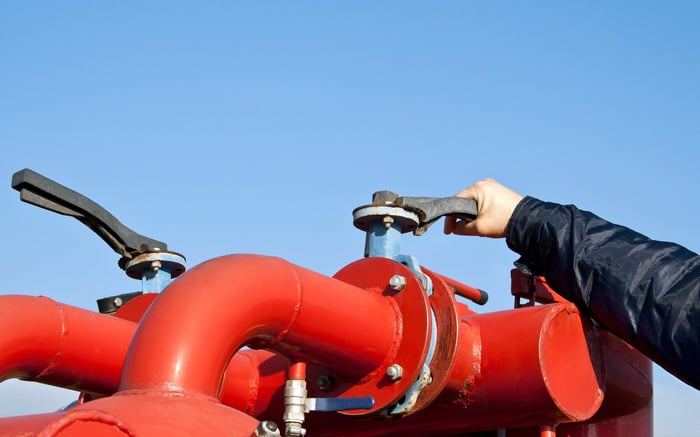 In the years since it slashed its dividend in response to the oil and natural gas crash of 2014 and 2015, Kinder Morgan has more than doubled its quarterly payout from $0.125 to $0.27. 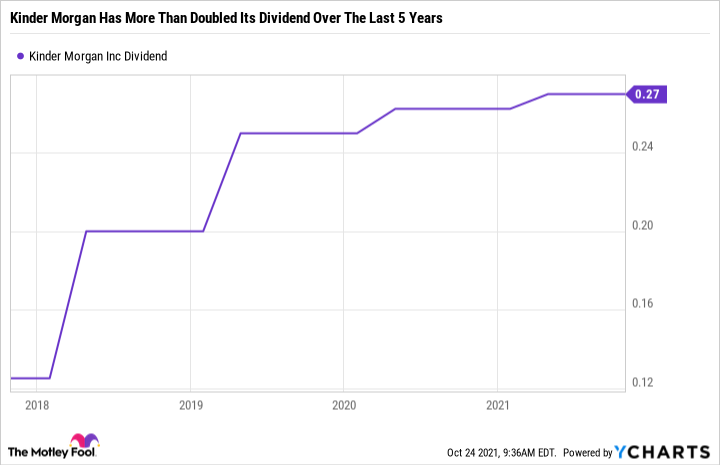 Earlier this year, the company increased its annualized payout by 3% from $1.05 to $1.08 -- its fourth straight yearly boost.

Four years of hikes in a row isn't all that impressive on this score, especially compared to a stock like AT&T that had increased its payout for 34 consecutive years until it broke its streak last month. However, there's an argument to be made that Kinder Morgan is well-positioned to sustain and grow its dividend for decades.

Kinder Morgan operates one of the largest infrastructure networks in North America, consisting of natural gas, crude oil, refined products, and carbon dioxide pipelines, storage terminals, and other assets. More than 90% of its cash flow is secured through multiyear take-or-pay and fee-based contracts. Those long-term agreements cushion Kinder Morgan from swings in oil and gas prices, among other factors.

This consistency was put on display in 2020; Kinder Morgan suffered only minor hits to its top and bottom lines despite crashing energy prices. But that downside risk protection also reduces its ability to profit from the energy market's upside, which is one reason why the company isn't directly benefiting as much as other energy stocks from oil and natural gas prices that recently hit seven-year highs.

In its Q3 earnings release, Kinder Morgan said that for the full year, it expects to earn $5.4 billion in distributable cash flow (DCF) and $7.9 billion in adjusted earnings before interest, taxes, depreciation, and amortization (EBITDA). Hitting that guidance would amount to increases of less than 10% compared to its 2019 results.

Investors who pick Kinder Morgan for the income, not necessarily because they hope to reap market-beating share price gains, won't mind the company's low growth rate. Instead, they're likely to be impressed that its expected $5.4 billion in full-year DCF will cover its dividend, growth and expansion capital, and debt repayments with $600 million to spare. In fact, Kinder Morgan only spent $1.8 billion on dividends in the first three quarters of 2021, but generated DCF of more than double that -- $4.37 billion. This is all to say that Kinder Morgan is raking in plenty of cash to grow its business, pay down debts, and fund its dividend.

A weak balance sheet was one of the primary reasons the company was pressured to cut its dividend in 2015. To make sure that doesn't happen again, Kinder Morgan has set strict limits on how much debt it wants to take on relative to earnings. It expects to finish the year with a net debt to adjusted EBITDA ratio of 4, which is even better than its long-term goal of 4.5.

Despite its low growth rate, Kinder Morgan remains bullish on the future of natural gas. Natural gas has lower carbon emissions than other fossil fuels, allowing it to fit into the energy mix of the future, which is expected to feature a greater and greater share of power generated from green and renewable sources. Kinder Morgan has also been making investments in alternative energy such as renewable natural gas to ensure it stays on the right side of the energy transition. The company's core natural gas business, its high yield, and its strong balance sheet combine to make it one of the best dividend stocks on the market today.