The market loves AppLovin again. But should you?

Back in April, I told investors I didn't love AppLovin's (APP -1.32%) initial public offering (IPO). The mobile game and technology company's revenue growth was decelerating, it was unprofitable, its debt levels were high, and its valuations were too rich. When I made that call, the stock was already trading 22% below its IPO price of $80, so the market seemed to agree.

But over the past six months, the stock has risen more than 50% to the mid $90s. Let's see why the market warmed up to AppLovin, and if its stock could still have more upside. 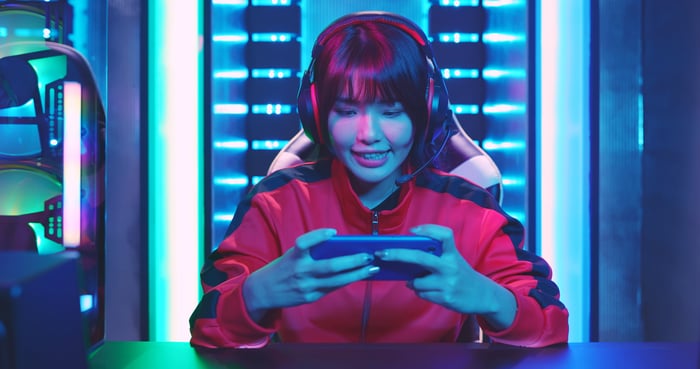 What does AppLovin do?

AppLovin's consumer division, which generated 51% of its revenue in 2020, owns a portfolio of over 200 free-to-play games like Project Makeover, Wordscapes, and Dingbats. It significantly expanded this segment by buying smaller studios and signing new partnerships over the past two years, and more than 200 million people now play its games every month.

AppLovin's business segment, which generated 49% of its revenue last year, helps companies analyze, monetize, and publish their own apps. It expanded this division by buying the mobile-app measurement company Adjust in April for about $1 billion, and agreeing to buy the mobile advertising network MoPub from Twitter (TWTR) for $1.1 billion in early October.

How fast is AppLovin growing?

In the first half of 2021, AppLovin's revenue soared 127% year over year to $1.27 billion, but some of that growth came from its recent acquisitions. On an organic basis, which excludes its acquisition of Adjust and any revenue from newly launched games or apps, its revenue increased 89% year over year in the first quarter and 97% in the second quarter.

AppLovin also turned profitable again with a net profit of $3.1 million in the first half of the year, compared to a net loss of $16.7 million a year earlier. Its adjusted EBITDA soared 155% to $314.8 million.

For the full year, the company expects its revenue to rise 83% to 86% and for its adjusted EBITDA to roughly double. It expects that growth to be driven by the "very strong momentum" of its business segment and the launches of "new evergreen titles" for its gaming segment in the second half of the year.

The recent injunction against Apple (AAPL -1.76%), which will allow apps to bypass the App Store's 30% fee with links to external payment services, could also boost AppLovin's gross margins this year. Apple's recent privacy update on iOS, which allows users to opt out of data-tracking features, is also hurting bigger platforms, but might drive more of those advertisers to AppLovin's smaller advertising network.

Did AppLovin prove me wrong?

I clearly underestimated AppLovin's ability to generate accelerating revenue growth while achieving stable profits again. Its debt levels also seem manageable with a debt-to-equity ratio of 1.3 at the end of the second quarter, but its recent $1.5 billion loan could bump that ratio above two.

The stock trades at just over 50 times forward earnings and about 13 times forward sales. Those are surprisingly reasonable valuations compared to its organic growth.

However, AppLovin still faces plenty of competition in the mobile gaming market, in which other app development platforms like Unity (U -1.06%) provide similar analytics and monetization tools. Unity's game engine already powers over half of the world's mobile, console, and PC games, so it could potentially hurt AppLovin with aggressive bundling tactics.

Should you buy AppLovin's stock?

I'm warming up to AppLovin, but I'm not completely bullish on the stock yet. The company is still relying heavily on acquisitions to keep growing, and its debt levels will keep climbing as it expands its ecosystem.

I'd rather wait for a few more quarters and see how its acquisition of MoPub plays out before I consider it to be a viable investment. For now, most investors interested in this space should probably stick with balanced plays like Unity instead.

Why AppLovin Stock Was Plummeting This Week