For many people starting from scratch, a million-dollar retirement nest egg seems wildly out of reach. It takes money to make money, after all, and it seemingly requires more cash than the average paycheck provides once all the bills are paid. Discouraged before they even try to get started, many would-be investors don't even bother trying to become self-made millionaires.

That way of thinking, however, overlooks a critical element of building a fortune from nothing. That's that time can do a lot of work even when there's not a lot of extra cash to invest for the future. In fact, you might be shocked at how much money you can make over the course of 40 years just by scraping up an extra $100 per week.

A little goes a long way, given enough time

With the Census Bureau reporting the average U.S. employee makes around $41,000 per year while the average household annually banks something on the order of $67,000, it comes as no surprise that the majority of Americans say they're living paycheck to paycheck. Money often gets tight before the next paycheck arrives. Having any extra funds to take away feels practically impossible.

But you might be surprised at the amount of cash you can free up when you're serious about saving. Canceling cable, switching insurance providers, closing a gym membership you never use, and cooking at home rather than eating at restaurants are just some of the tough cost-cutting decisions you can make that usually don't seem so tough once they're made. Freeing up an extra $100 a week isn't impossible to most of those who make a real effort to do so. 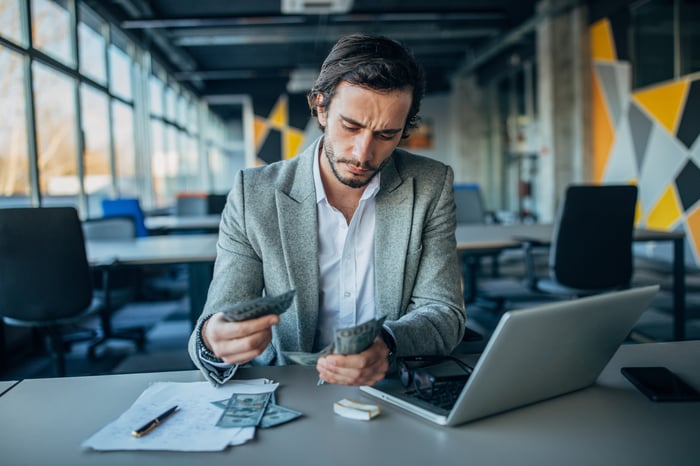 But is an extra $100 per week enough to truly matter? Actually, it's quite a bit, as long as you remain in the habit of putting that extra money to work for you in the stock market...even when it's tempting to stop.

Let's take a hypothetical investor named Annie as an example. At 25 years old, Annie has just landed her dream job as a chef, with a starting salary of $30,000 per year. She knows she may never make considerably more than that, but she doesn't care -- she loves her job! She also loves the idea of eventually retiring, though, and because the restaurant she works at doesn't offer pension or retirement benefits, she knows she's going to have to make that happen on her own. Living modestly, she's able to set aside an extra $100 per week, putting that money into an S&P 500 (^GSPC -0.61%) index fund that conservatively returns an average of 9% per year.

Surprised? This is even more surprising: If Annie can keep finding that extra $100 per week for another 10 years, she'll be sitting on roughly $2 million at the end of that 40-year stretch.

Those are jaw-dropping numbers, to be sure. But the math has been checked. It's right! Annie's $208,000 worth of $100/week contributions will turn into more than a $2 million nest egg by the time she turns 65.

The big question, of course, is how did so little turn into so much? The answer is compounding, because you're not earning money only on your cash contributions but also on your earnings.

Think about it like this. If Annie sees the typical 9% return on her first year's contribution of $5,200 ($100 a week), that amount is worth $5,668 at the end of that period. That's $468 worth of growth. If she earns another 9% on that $5,668, though, that portion of her investment swells to $6,178. That's a $510 improvement on her initial investment following its first year's growth. The third year, a 9% return on $6,178 would grow this piece of her portfolio by $556. Her absolute returns are getting bigger every year because the market has more and more money to grow. At the same time, her new contributions are experiencing the same sort of accelerated growth. 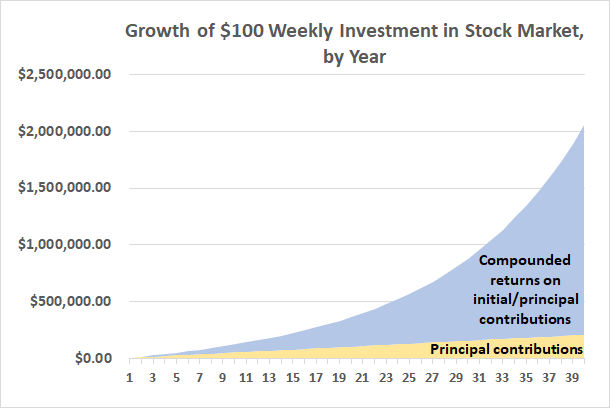 Obviously the stock market isn't quite that consistent. Some years it may return more than 9%, and other years it may return less. In the occasional off year, stocks collectively lose ground. Over the course of 30 or 40 years, though, the law of averages kicks in.

If you've been so discouraged by how little extra cash you think you'll be able to come up with that you haven't even bothered trying, Annie's outcome should be encouraging. It doesn't take a whole lot of money to become rich. It just takes time. And even if you can't find an extra $100 per week right now, it's still OK. Something is better than nothing. A modest $200 per month for the first 20 years of your professional career -- when you're likely to be earning less -- will leave you with around $130,000 saved up for retirement by the time you enter the higher-earning second half of your career. That's a solid start toward bigger things.

The point is, start somewhere, no matter how small that start may be.