This high-flying solar business continues to justifies its expensive valuation.

There's a reason investors in growth stocks feel comfortable about valuing some companies at levels significantly above what their current business metrics warrant. When a company has a large enough runway for growth, its underlying business can over time satisfy some ambitious expectations.

Enphase Energy (ENPH 2.45%) is in the fast-growing solar power generation industry, and its specific business offerings have been in the sweet spot for the past several years. Its growth looks to be accelerating, too. The company gave investors a very bright forecast for 2021's final quarter along with its third-quarter earnings report last week. 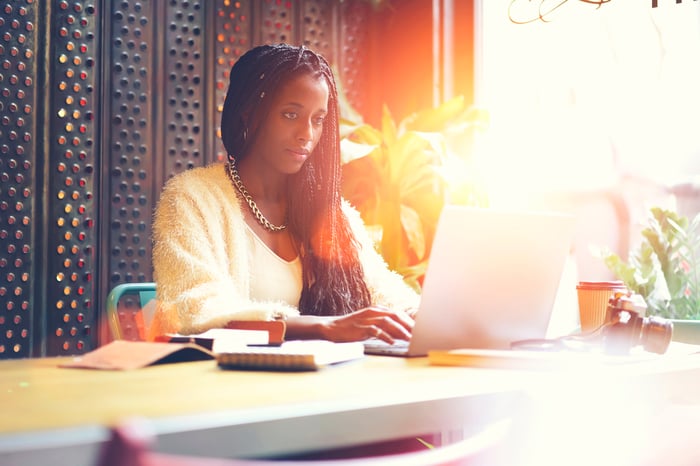 Enphase manufactures microinverters, which convert the DC power generated by solar panels into the AC power used in homes and businesses. It also supplies other technology that goes with those components, including software, monitoring apps, and now battery storage systems. The company has been growing revenues quickly over the past several years. And as the chart below shows, it has also been growing its profitability along the way. 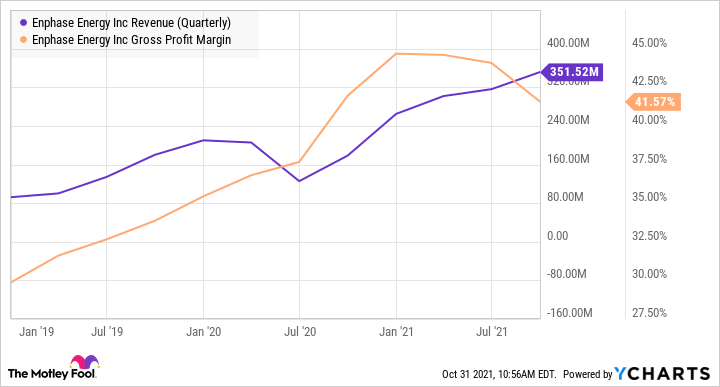 Other than when sales growth took a breather during the pandemic, the company has responded to the growing market needs. Gross profit margin spiked last year due to certain non-recurring tariff refunds, but has also been on a steady trajectory overall.

Besides the temporary slowdown caused by the pandemic, the company has also been working through some supply chain issues as it attempts to satisfy the growing demand for its wares. With added production at its plant in Mexico and enough input material supply, management told investors it expects its revenues will be about 14% higher in the fourth quarter than they were in the third. The midpoint of its estimated fourth-quarter revenue range represents year-over-year growth of 51%.

In the company's third-quarter report, it told investors "We worked diligently to meet the surge in customer demand while successfully navigating global component supply constraints and logistics challenges." And Enphase CEO Badri Kothandaraman also said in the conference call with investors that while he is happy with the supply situation for the fourth quarter, the situation remains dynamic. "We remain vigilant and cautious given the growing demand," he added.

Many companies would be happy to have their struggles be due to growing demand. And this one has been planning for it. With added manufacturing capacity in Mexico and China, Kothandaraman said Enphase expects to "easily achieve" its global capacity target of 5 million microinverters per quarter by the end of this year. For perspective, in its record-setting third quarter, microinverter shipments numbered 2.6 million.

Investors have been anticipating Enphase's growth, however, and the company's price-to-earnings ratio is currently in the triple digits. But as measured against 2021 sales, and factoring in the fourth-quarter guidance, Enphase is valued at a price-to-sales ratio of about 23, down from close to 40 early in the year.

Moreover, while it has been spending significantly to build out its production capacity, that push is largely over, so in the future, a greater share of its sales should flow down to the bottom line. The company exited the third quarter with $1.4 billion in cash after generating $113 million in cash flow from operations, with capital expenditures down to $12.7 million for the quarter.

Enphase just launched its latest IQ8 microinverter offering as well as solar power system integration technology to use with existing standby home generators for efficiency during power outages. The IQ8 can also create a microgrid capable of providing backup power during an outage using only sunlight, and without needing battery storage.

Given the anticipated continued growth in the sector, Enphase's new products and technology, and the expectation that it will have enough supply and capacity to satisfy demand, the outlook is sunny for this company and its shareholders.