Shares of tech giant Nvidia (NVDA 3.66%) jumped 23.4% in October, according to data from S&P Global Market Intelligence. Catalysts include the market's overall strength and news from Meta -- social media giant Facebook's (META 23.28%) new corporate name -- that investors viewed as a positive for Nvidia. 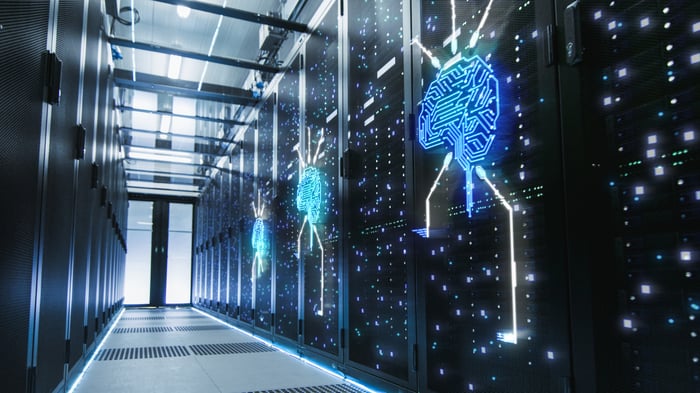 Nvidia stock moved steadily upward throughout October, with the sharpest rise coming in the last week of the month. The market's strength provided a tailwind, especially to tech stocks. In October, the S&P 500 rose 6.9% and the tech-heavy Nasdaq popped 7.3%.

The second catalyst was news from Meta, then named Facebook, in its third-quarter earnings release. In its Oct. 25 release, the social media leader said it planned to significantly increase its capital spending next year. In 2022, it expects capital expenditures in the range of $29 billion to $34 billion, compared to about $19 billion this year. The company indicates this big ramp-up in spending will be "driven by our investments in data centers, servers, network infrastructure, and office facilities."

Investors in Nvidia loved this news, driving shares up nearly 7% the next day and more than 11% for the week. Nvidia is the leader in providing graphics processing units (GPUs) for various data center applications, including powering artificial intelligence, a tech that's in extensive use by social media platforms. So, it makes great sense that investors believe that Nvidia will see a boost in its business from Meta's huge increase in spending.

There's another factor at play here, too: the metaverse. Meta also said in its earnings release that it's "dedicating significant resources toward our augmented and virtual reality products and services, which are an important part of our work to develop the next generation of online social experiences." This is a reference to the metaverse, which Merriam-Webster defines as a "highly immersive virtual world where people gather to socialize, play, and work."

Nvidia could benefit from Meta's focus on the metaverse, thanks to its recently launched Omniverse, which Nvidia has described as "the 'plumbing' on which metaverses can be built."

Material news should be coming soon. Nvidia is scheduled to report its fiscal third-quarter results on Wednesday, Nov. 17, after the market close.