Goldman Sachs has posted strong earnings growth this year, but analysts see things slowing down in 2022.

Goldman Sachs (GS 1.03%) crushed earnings this quarter. The firm beat analysts' expectations on revenue estimates by 16%, and by 47% on earnings per share (EPS) estimates. It benefited from strong activity in mergers and acquisitions (M&A), as well as a hot market for initial public offering (IPOs).

The firm now trades at a cheap valuation following the blowout earnings, with a price-to-earnings (P/E) ratio of 6.8. To put this into perspective, competitors like Morgan Stanley and Charles Schwab trade at P/E ratios of 13.2 and 31.1, respectively. Although Goldman Sachs looks like a solid value stock, it might not be as cheap as it seems. That's because explosive growth this year probably won't last, with Wall Street analysts forecasting slower growth in 2022.

A year for the record books

The gains can be traced to the blistering pace of M&A and IPOs this year. According to Refinitiv, 2021 has been a year for the record books. Through three quarters, there have been 40,000 M&A deals totaling $4.4 trillion, the highest since records began being kept in 1980. 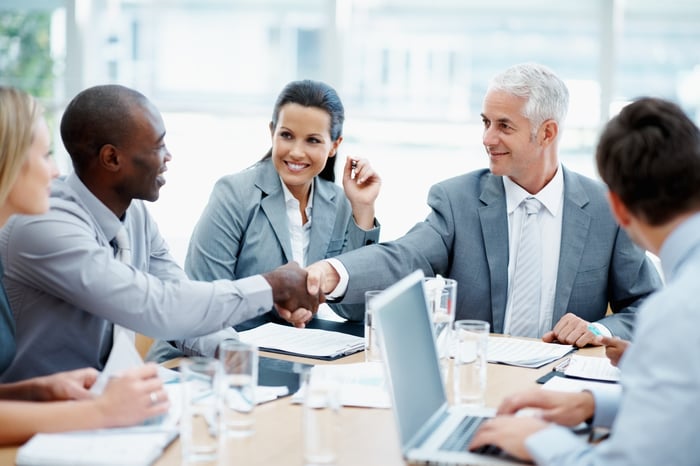 According to Alan Felder, managing director of UBS's OneBank Partnership, activity looks like it could be robust going into 2022. Felder cites low interest rates, record levels of dry powder (cash available to spend on deals), and possible changes to capital gains taxes as drivers for strong M&A markets. But investors should be cautious because growth probably will slow.

Can investment banks keep crushing it?

This boom in deal activity, which has been welcomed by Goldman Sachs, JPMorgan Chase, Morgan Stanley, and other investment banks, should be seen for what it is -- a boom, and they always wind down eventually. In Goldman Sachs' earnings call, the company said that its backlog of deals -- an estimate of revenue from future transactions -- was lower compared to the second quarter but still above the level from the year prior. This suggests strong investment banking performance could continue into the end of the year, albeit at a slowing pace.

Goldman Sachs' management also pointed out a few key factors it is watching, including the increased likelihood of tightening monetary policy in the near term due to inflationary pressures. Although gradual increases to interest rates shouldn't affect M&A activity too much, interest rates that rise rapidly in response to inflation can discourage companies from M&A activity until inflation subsides.

It's not just slowing investment banking that could hurt the firm. This year, Goldman Sachs generated $12 billion in revenue from its asset management segment, up 152% from last year. Much of the firm's gains could be attributed to its equity and debt investments, but these may not be a sustainable source of revenue, either. This segment saw much slower growth in the third quarter, with revenue of $2.3 billion, down 56% from the quarter that preceded it, largely due to $820 million in losses on its public equity investments.

Analysts expect growth to slow down

So although Goldman Sachs has seen impressive performance this year while crushing expectations along the way, investors shouldn't expect the rapid growth to continue. Investment banking could continue to be robust into next year, but the slowing rate of growth should be on investors' minds. For this reason, I believe Goldman Sachs' cheap valuation may be justified.