DoorDash is scheduled to report third-quarter earnings on Nov. 9.

DoorDash (DASH 2.95%) started as a food delivery company and is now moving into delivering other goods. At the pandemic's onset, the company caught a tailwind as millions of folks looked to avoid leaving their homes. But as the economy now reopens, some investors worry that DoorDash could experience a significant drop-off in orders and revenue.

So far, that scenario is not playing out. Instead, DoorDash's more difficult challenge has been fulfilling the increasing demand from customers. The company is experiencing a shortage of drivers willing to make deliveries, and it may need to raise wages and incentives to attract more people. Investors will want to tune in to the company's third-quarter earnings release on Nov. 9 to see what management says. 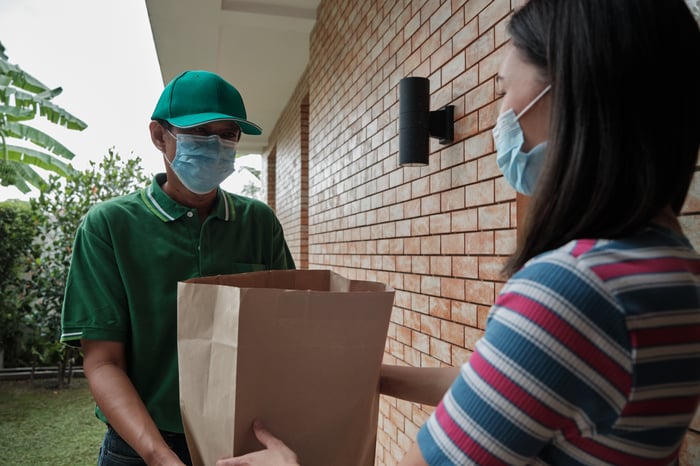 In its fiscal second quarter of 2021, DoorDash increased revenue by 83% from the same period last year. Perhaps more importantly, it increased revenue sequentially over the previous quarter, and that went a long way in relieving some investor concern that revenue would decrease as economies reopened.

There is undoubtedly good reason for investor concern in that regard. DoorDash got a boost in revenue because restaurants were no longer allowed to serve guests in person. As a result, people ordered food for delivery more often since they couldn't dine at a restaurant. With governments now easing restrictions on restaurants and allowing people to eat inside again, some folks will choose that option instead of ordering for delivery. It's impressive then that DoorDash increased revenue over the first quarter despite the reopening of restaurants.

Now, a new problem is arising for DoorDash. Easing restrictions on businesses has meant a boom of new job openings and a surging demand for workers. That's making it harder for DoorDash to onboard enough "dashers" to meet customer demand. Admittedly, the company added more first-time deliverers in its most recent quarter than at any time in its history. But the labor shortages have gotten worse since it last gave an update to shareholders.

The company has at least a couple of options on approaching the shortage: It can increase incentives for new dashers to make sure it can meet customer demand. Or it can maintain its current policy and wait for more workers to apply. The former policy would help increase revenue at the expense of profit margins, and the latter could cause revenue growth to slow down but maintain profit margins.

Management is almost certain to discuss how it's thinking about this difficulty in the shareholder letter that accompanies its quarterly earnings release. It can be sure to face questions from analysts during the company conference call that follows the earnings release if it doesn't.

Analysts on Wall Street expect DoorDash to report revenue of $1.18 billion in Q3 and a loss per share of $0.26. If the company hits Wall Street estimates, it would be a sequential decrease from the second-quarter revenue of $1.24 billion. It would also mark the first sequential drop-off in at least four quarters.

DoorDash shares are already up 38% in 2021. The market may be responding more to the company's ability to generate orders and revenue despite the reopening of economies. So the stock is not cheap and could have many of its excellent prospects priced in already. Investors might do well then to wait for a pullback before buying DoorDash.