Investors were bullish after the company's latest earnings result.

Shares of automaker Ford (F -2.86%) popped 20% in October, according to data from S&P Global Market Intelligence. The maker of the F-150 truck released its third-quarter earnings report on Oct. 27, beating analyst expectations, and raised guidance for its full-year results. This combination of factors, along with the recovery of the broad market at the end of October, is why the stock was up so much last month.

On Oct. 27, Ford released its financial results for the three months ending in September. Revenue was down 5% year over year in the quarter, but automotive revenue came in higher than analysts expected, at $33.2 billion versus the $32.5 billion consensus estimate. With the semiconductor shortage hurting Ford's ability to finish manufacturing cars, it was already expected that revenue would be depressed this quarter, so this result is not necessarily bad news. 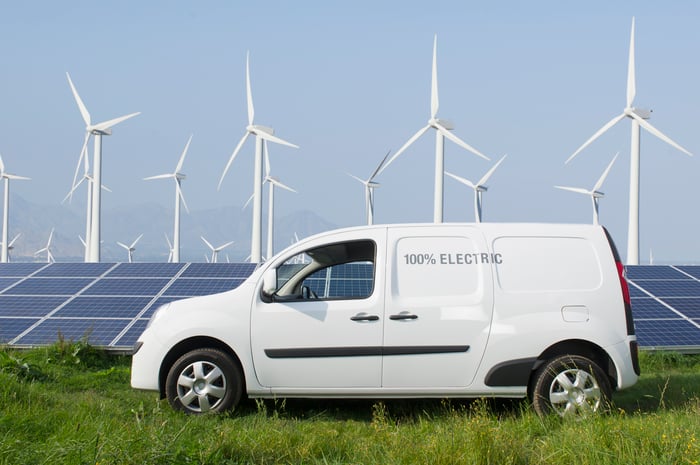 Ford also beat on the bottom line, with adjusted earnings per share (EPS) of $0.51 versus the expectation of $0.27 for the quarter. This, plus the fact Ford reinstated its quarterly dividend, likely gave investors confidence in the company after reading the report.

Lastly, Ford raised its guidance on adjusted earnings before interest and taxes (EBIT) from a range of $9 billion to $10 billion to a range of $10.5 billion to $11.5 billion for 2021. This is a large jump in guidance, and another reason investors are bullish on Ford stock right now.

Ford is making progress on its plan to transition its lineup from petroleum-fueled cars to electric vehicles (EVs). Through 2025, the company plans to invest $30 billion to compete with Tesla, other EV start-ups, and its legacy brethren as it races to capture consumer interest in EVs.

While early, so far it looks like Ford is doing quite well with its strategy. It is building battery plants in Kentucky and Tennessee that will raise the company's capacity to over 1 million units. It has just doubled its planned capacity for the new F-150 Lightning (its first electric truck) to 80,000 units a year, and it is building an EV factory in Germany.

Plus, it has an equity stake in Rivian, an electric vehicle start-up that plans to go public at a valuation of $55 billion. If Ford sells its stake in Rivian, it could give its cash balance a boost, which is important since the transition to electric cars will be very expensive.

Right now, the stock trades at a market cap of $72 billion. If it can hit the low end of its guidance for 2021, Ford will trade at a price-to-EBIT of 6.8, which is very cheap versus the market average. This means that if you believe in Ford's ability to transition to EVs, it is likely not too late to invest in the stock.