The cryptocurrency mining specialist is now up roughly 457.5% year to date.

Shares of Hut 8 Mining (HUT -8.30%) climbed 59.5% in October, according to data from S&P Global Market Intelligence. The cryptocurrency mining specialist's stock gained gained ground thanks to strong pricing momentum for Bitcoin and Ethereum. 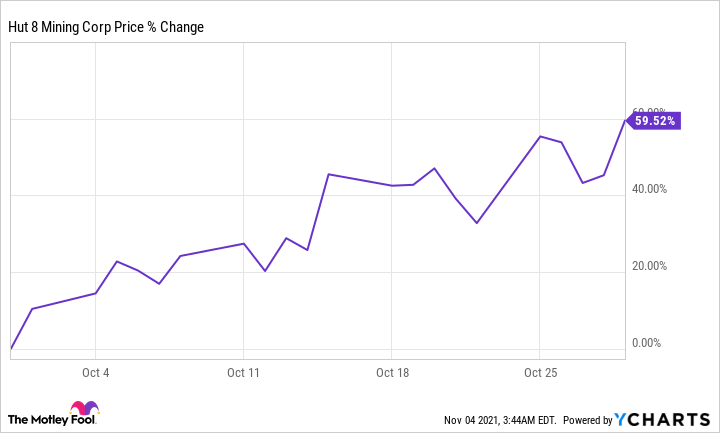 October was a fantastic month for top cryptocurrencies, with Bitcoin and Ethereum's ether tokens climbing 48.7% and 51.4%, respectively. Hut 8 specializes in mining for these two cryptocurrencies, and strong bullish momentum for the tokens helped the company's stock post a month of stellar gains. The company's valuation also appears to have gotten a boost from favorable analyst coverage and a new mining hardware purchase.

DA Davidson's Christopher Brendler published a note initiating coverage on Hut 8 on Oct. 14, giving the company a buy rating and putting a one-year price target of $20 per share on the stock. At the time of the note's publication, this implied potential pricing upside of roughly 84%. The analyst named Hut 8 as DA Davidson's top pick in Bitcoin mining and said he thinks the company's earnings growth will significantly exceed expectations.

Hut 8 then announced on Oct. 21 that it had purchased 12,000 new MicroBT miners at a price of $58.7 million. The new mining hardware will start being delivered in January, with planned delivery for roughly 1,000 units per month.

Hut 8 has continued to make strong pricing gains early in November's trading. The company's share price is up roughly 13.9% in the month so far. 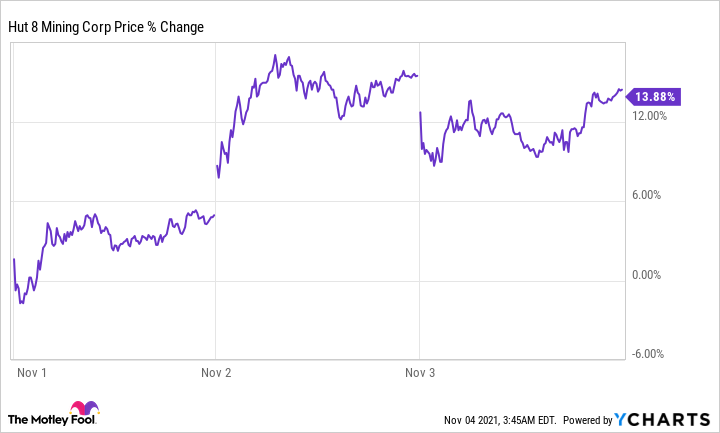 It looks like continued bullish momentum in the crypto space is working to drive the company's share price higher. Bitcoin is currently up roughly 2.7% in November, while Ethereum's ether token is up 7.4% across the stretch.

Hut 8 is continuing to ramp up its mining capacity and making substantial investments to accelerate its growth trajectory. However, investors should also keep in mind that the stock's movements will likely continue to correspond with pricing trends for Bitcoin, and to a lesser extent, Ethereum.

Hut 8 is scheduled to publish its third-quarter results and host a conference call before the market opens on Nov. 11.