That decline reduced Chegg's stock price to its lowest levels since the COVID-19 crash last March and turned it into a trending topic on Reddit's WallStreetBets (WSB) subreddit. Let's see why Chegg's investors were so eager to dump the stock, and if its post-earnings sell-off was justified. 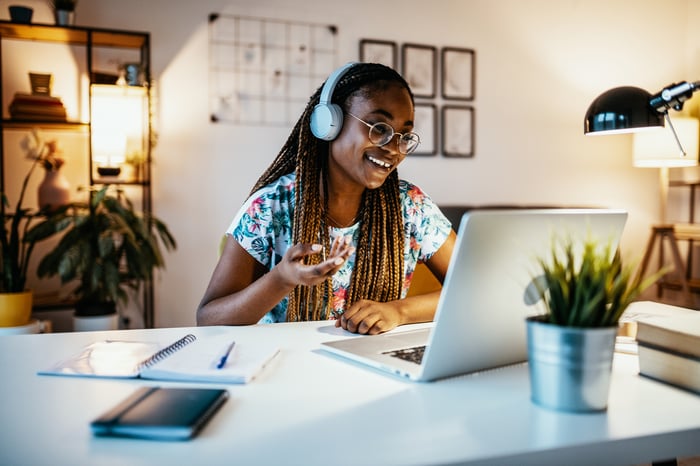 What does Chegg do?

Chegg's online education services, especially its tutoring platform which allows experts to solve homework questions for students, have often been criticized as a form of cheating. Two years ago, Citron Research called Chegg the "poster child of institutionalized cheating" as it shorted the stock.

Nonetheless, Chegg continued to grow amid rising demand for its online tutoring services and textbook rentals. When the pandemic hit, that demand accelerated significantly as more students stayed at home:

That progress made Chegg look like a promising growth stock, and its shares hit an all-time high of $115.21 during the Reddit-fueled rally in February.

But then those tailwinds faded away...

But just like other companies that experienced unusually strong growth throughout the pandemic, Chegg also suffered a post-pandemic slowdown as more schools reopened:

Chegg Services continued to grow on top of its strong growth in 2020, but its Required Materials business experienced a severe downturn -- which it mainly blamed on lower college enrollment rates and longer lead times caused by a nationwide shortage of workers.

As a result, Chegg's revenue growth of 12% in the third quarter slightly missed analysts' expectations for 13% growth. However, its forecast for a 5% to 6% year-over-year decline in revenue in the fourth quarter completely missed the consensus forecast for 17% growth.

For the full year, Chegg only expects its revenue to rise 18% to 19%, which was significantly lower than its August forecast for 25% to 26% growth.

That guidance reduction, which CFO Andrew Brown blamed on a "temporary industry slowdown," caused Chegg's stock to plummet. It also completely overshadowed the fact that Chegg's net loss narrowed again in the first nine months of 2021 as its adjusted earnings before interest, taxes, depreciation, and amortization (EBITDA) improved 58% year over year.

However, Chegg's forecast for 23% to 24% adjusted EBITDA growth for the full year still came in far below its August guidance for 42% to 45% growth.

Chegg's valuations were simply too high

Chegg's business isn't headed off a cliff yet, but its previous guidance was too optimistic and its stock had gotten too expensive. Even after being cut in half, Chegg's stock still trades at about six times this year's sales.

Chegg's online tutoring competitor Nerdy (NYSE:NRDY), which connects private tutors to students via a gig economy marketplace, trades at 10 times this year's sales. It expects its revenue to rise 33% this year.

Therefore, Chegg's post-earnings crash merely reset its valuations to more reasonable levels. However, the stock could continue to slide if it can't stabilize its post-pandemic numbers over the next few quarters.

Is it a value stock or a falling knife?

Chegg can't be considered a value stock at these levels yet, especially when other online education companies like 2U (NASDAQ:TWOU) are trading at even lower price-to-sales ratios.

But I'm also reluctant to call Chegg a falling knife since the company is still generating double-digit sales growth with narrowing losses. Therefore, I'd simply avoid the stock until I see how it fares over the next few quarters.