Shiba Inu is shaping up to be a repeat of Dogecoin, which could leave investors underwater. Here's what you could buy instead.

If the meteoric rise of meme-cryptocurrency Shiba Inu (SHIB -4.18%) has left you with a sense of deja vu, you're not alone. Its ascent is remarkably similar to that of Dogecoin (DOGE -3.50%), one of the more famous stories in cryptocurrency circles, originally launched as nothing more than a joke-coin by its founder.

But while Dogecoin has suffered a fall from grace in recent months, down 62% from its all-time highs, Shiba Inu is soaring -- so much so that its market capitalization (valuation) just crossed $38 billion, making it more valuable than Dogecoin.

It has also officially rocketed into the top 10 most valuable cryptocurrencies on Earth right now. Unfortunately for Shiba investors, the token shares far too many similarities with Dogecoin, in the sense that it has almost no functional purpose and an almost unlimited supply. According to a top merchant directory, just 106 businesses globally are actually accepting Shiba Inu as payment for goods and services. That's just not enough to warrant sustained adoption among consumers, leaving the token as nothing more than a vehicle for speculation.

For that reason, Shiba Inu is likely to succumb to a similar fate to Dogecoin eventually, leaving many late-to-the-party investors potentially underwater on their holdings.

But it's never too late to diversify into some high-quality stocks instead, and given the grim outlook for Shiba, here are two hyper-growth companies that are likely to heavily outperform the token over the long term.

1. The case for Upstart

By now, investors might be aware of the innovative applications cryptocurrencies might play a part in going forward. But their potential might be trounced by disruptive technologies like artificial intelligence (AI). For instance, Upstart Holdings (UPST -7.34%) is masterfully applying AI to transform consumer lending.

The company's AI-driven algorithm has one goal: To replace the decades-old FICO scoring system, which it says doesn't factor in some of the most valuable pieces of information banks have available to them today. When Upstart assesses a borrower, its evaluation model accounts for over 1,000 data points, and the result is up to 75% fewer defaults with the exact same loan approval rate. The company also points out that artificial intelligence could deliver fairer, more inclusive lending practices that also have the ability to update rapidly as a borrower's circumstances change.

Upstart doesn't lend money itself -- it's a loan originator for banks, and therefore it carries no credit risk. It generates revenue through origination fees, but it also licenses its algorithm to financial institutions that want to directly integrate the AI-powered decisioning into their own application processes. 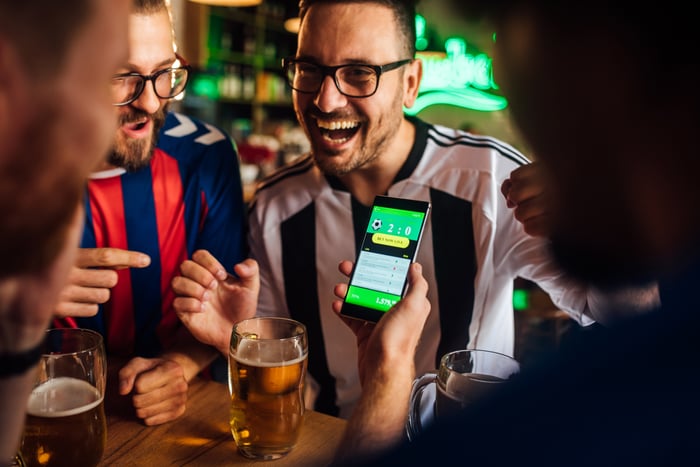 2. The case for Paysafe

When it comes to emerging industries, online gambling is one of the most exciting for U.S. investors. It feels like a long time coming, but the government has left most decisions to legalize the practice to individual states. Payment processing powerhouse Paysafe (PSFE -1.02%) is a key facilitator of the industry's success, acting as a secure bridge between consumers and digital gambling houses.

The company's Skrill and Neteller brands provide digital wallet and funds transfer services to some of the largest gambling giants in the world, including Flutter Entertainment's famous Pokerstars subsidiary. Paysafe now serves Flutter's U.S. FOX Bet sports betting venture, which has powered its way through four of the 17 states where online gambling is legal.

But that's not Paysafe's only American bet. It's currently working with bookmakers and online casinos across 15 states, and north of the border, it processes almost 100% of all online gambling transactions in Canada.

The company's iGaming (online gambling) segment in North America is actually its hottest right now, growing revenue by 72% in the most recent second quarter compared to 41% growth across the rest of the business.

Investors holding Shiba Inu might be interested to know that Paysafe's digital wallet now supports trading across 37 cryptocurrencies on 30 exchanges, so owning this stock not only provides exposure to a strong payments business, but also a splash of crypto, too.

But one big point of difference between Paysafe and Shiba Inu is that Paysafe will generate over $1.5 billion in revenue this year. For now, Shiba is simply a one-dimensional token with almost no revenue prospects whatsoever.

Paysafe will likely still be powering payments in the growing U.S. online gambling industry long after Shiba has lost all relevance.