The country's leading multiplex operator offers up its third-quarter results after Monday's close.

There's never a dull moment when it's AMC's turn to step up during earnings season. Last time out was just the latest roller-coaster ride. The stock opened 9% higher on the better-than-expected earnings news, but it would go on to give back all of those gains -- and then some -- in the subsequent hours. The shares ultimately closed 6% lower that day.

How will this week shake out? The shares are much higher now, and the the same can be said about the stakes. No matter how the numbers play out or whatever rabbits AMC CEO Adam Aron pulls out of a hat, the only given here is that AMC stock will be on the move this week. 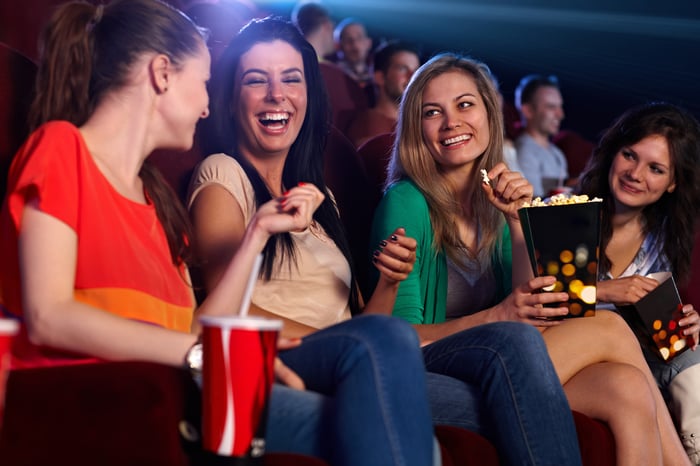 Analysts see $717.1 million in quarterly revenue when AMC reports on Monday afternoon. It's a big number compared to the $119.5 million it reported a year earlier, but let's keep the enthusiasm in check.

Revenue should be better than Wall Street's top-line target. We saw this happen three months ago when the $444.7 million it delivered in revenue for the second quarter blew past the $375.3 million that Wall Street pros were forecasting. The year has been gradually getting better for the multiplex industry, and analysts tend to be slow in catching up to positive momentum.

It didn't help, of course. The stock would close lower the next day despite the top-line beat.

Investors should be getting be a mixed bag at the other end of the income statement. Analysts see AMC's deficit contracting to $0.51 a share, a lot less than it posted a year earlier even if we factor in a fivefold increase in outstanding shares whittling away at its per-share results. AMC has posted eight consecutive quarterly losses, but the red ink has been narrowing sequentially through the first two quarterly reports of 2021. It has posted a larger deficit than Wall Street's been forecasting in three of the past four quarters.

One can still argue that the stage is naturally set for AMC shares to move higher on a beat, but the stock has been one of this year's top gainers. The shares are trading 23% higher than they were the last time that AMC reported financial results. Trading at a high market cap multiple to its peers, AMC will have to earn that premium with a market share-gaining report. It has a better shot of moving higher if it impresses the market with newsy tidbits showing how it will separate itself from the pack of multiplex operators.

AMC has established itself as the trendy market darling among movie theater stocks. It's going to be volatile when the credits roll in a few hours.