Japan is building aircraft carriers again. Soon it will need some fighter jets to fly off of them.

A joint Chinese-Russian flotilla of 10 warships spent much of last week circling Japan's main island before retreating back to Chinese waters. This was the first-ever joint Chinese-Russian naval patrol in the region, and an action CNN warned could "potentially reignit[e] regional tensions."

To confront the implied threat, Japan is looking to add aircraft carriers to its navy for the first time since World War II -- and that could actually be good news for defense contracting giant Lockheed Martin (LMT 0.28%). 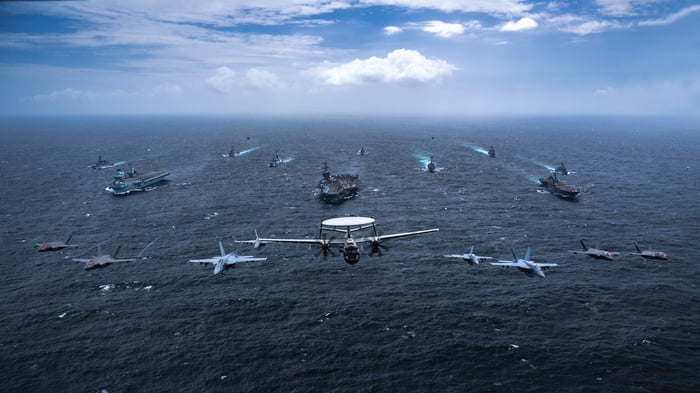 Return of the aircraft carrier

World War II began (for America, at least) with a surprise attack on Pearl Harbor by a fleet of Japanese aircraft carriers; it ended with Japan having no aircraft carriers left afloat. But to counter the growing threat from China, about a decade ago Japan began laying plans to return carriers to its Maritime Self-Defense Force.

To avoid alarming its neighbors, Japan didn't call its new warships -- the JS Hyuga and JS Ise -- "aircraft carriers." Instead, it chose the curious term helicopter destroyers (because if you stretch the definition, these ships are sized like very large destroyers, and designed to carry multiple helicopters).

That accomplished, Japan began building even larger -- and even more curiously named -- vessels. The "multipurpose operation destroyers" JS Izumo (DDH-183) and JS Kaga (DDH-184, pictured above), are light aircraft carriers in all but name. The only thing they're lacking right now is airplanes to launch.

Japan still needs some planes of its own, however. According to Flightglobal's World Air Forces 2021 report, Japan has already purchased, or has ordered, some 146 F-35A conventional and F-35B STOVL fighters from Lockheed Martin (LMT 0.28%). National Interest magazine notes that 42 of these will be of the -B variant, fighters that could operate off of aircraft carriers such as the Izumo and Kaga.

What it means for Lockheed Martin investors

Now mind you, the -Bs won't begin arriving in Japan before 2023. (Although the original plan was for them to start arriving in 2024 -- so Japan has already moved up the timeline.) But by then, the Kaga should be outfitted with new heat-resistant flight decks and other structural modifications needed to regularly launch and land F-35s. And the Izumo should receive similar modifications by 2025.

In short, Japan is on the road to adding fully functional light aircraft carriers to its naval fleet, from which F-35Bs can operate. The next logical step would be for Japan to build even larger conventional aircraft carriers, big enough to launch and land Lockheed's carrier-variant fighter, the F-35C. Indeed, according to USNI News, "there have [already] been calls to develop a new domestic carrier-class" capable of operating F-35Cs.

So what does this mean for Lockheed Martin? According to the latest data from the Center for Arms Control and Non-Proliferation, the all-in cost of a Lockheed Martin F-35A variant is about $110 million. (Add 23% to that sticker price for an F-35B, or 6% for an F-35C.) At these prices, Japan's F-35 purchases are already at least a $16 billion program for Lockheed, and probably even more than that.

As Lockheed Martin itself noted in its Q3 earnings report last week, the F-35 program is part of the "four primary areas that underpin [Lockheed's] longer-term growth forecast." No huge surprise there. Over time, Lockheed Martin expects revenue from F-35 sales to account for as much as 50% of its total revenue stream.

Granted, Japan is just a small part of that plan. Data from S&P Global Market Intelligence show that the total cost of every F-35 Japan has ordered amounts to barely one-half year's revenue for Lockheed -- and these purchases will be spread over a term of years, if not decades. But while Japanese F-35 purchases won't make or break Lockheed, they may well "move the needle."

The more Japan commits to building aircraft carriers, and buying pricier carrier-capable F-35Bs (and eventually -Cs) to fly off of them, the farther that needle will swing.