An influential commentator talked up the stock over the weekend.

Blade Air Mobility (BLDE -1.21%) got a positive mention in Barron's over the weekend, and the stock is taking flight as a result. Shares of the air mobility company were up as much as 14% on Monday on excitement about this business' potential.

Blade is taking the ridesharing concept pioneered in vehicles by Uber Technologies and applying it to helicopters, offering transportation services on a per-ride basis.

In this weekend's edition of Barron's, market columnist Al Root noted that while companies that make next-generation electronic aircraft (the latest iteration of the longtime dream of a flying car) are highly speculative and fraught with risk, Blade is relatively well positioned to succeed. The company, like Uber, does not own its own fleet, but rather manages routes and bookings for others. 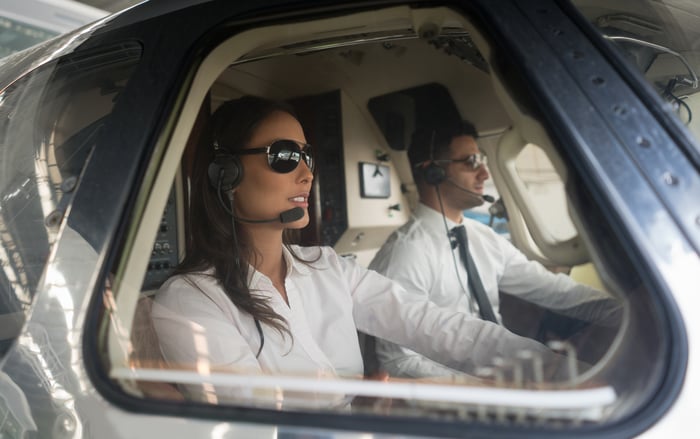 And although Uber has found it hard to make a profit due to competition from Lyft and others, scheduling helicopters is far more complex and not as easily copied. If one does believe the skies of the future are full of so-called electric vertical takeoff and landing (eVTOL) vehicles, Blade is a way to invest in that trend without taking on the risk of backing an individual manufacturer.

Blade hasn't been public for long, joining the markets back in May via a merger with a special purpose acquisition company (SPAC). And while the company is arguably a less risky investment than the manufacturer of new-age flying taxis, as the column notes, the stock still comes with a lot of risk.

Blade is not yet profitable, and even before Monday's jump, traded at more than seven times its 2022 sales estimate of $68 million. The company needs scale to be profitable, and scale is tough to achieve given the expense of helicopter rides and the limited total addressable market.

eVTOLs could change the cost part of the equation, providing a lower-cost alternative to helicopters that would open up a much larger part of the population to Blade's services and help the company to achieve that much-needed scale. It's an intriguing opportunity, but one that will likely take years to play out.

Why Blade Air Mobility Stock Is Up Today
409%