A burgeoning digital ecosystem makes this a top-notch business in a competitive sector.

There's no doubt the business continues to fire on all cylinders right now, and the stock's performance this year (up 29.7% year to date) suggests investors are aware as well. But here's one number you might have missed from Chipotle's latest financial release that reflects on its success and points to it continuing long-term. 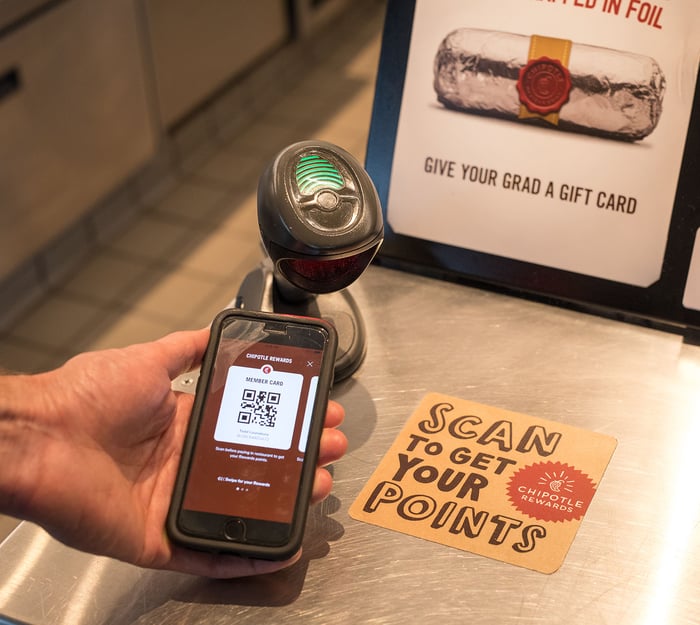 Catching up to the coffee king

During the third-quarter earnings call, CEO Brian Niccol mentioned that the company now has close to 25 million Chipotle Rewards members, a 40% increase from a year ago. This is even more remarkable when you consider that Chipotle launched the program in March 2019. These customers tend to visit often and spend more, which are obviously positive benefits for the business.

"As the program grows, so does our ability to provide sophisticated and relevant communications to our guests, which will ultimately deepen the relationship between members and the brand," Niccol said. Being a top restaurant choice among a tech-savvy demographic like teenagers certainly also helps.

Starbucks (SBUX 0.24%), known to have one of the best and most robust loyalty programs out there, finished its most recent quarter with roughly the same number of rewards members in the U.S. as Chipotle. But the ubiquitous coffeehouse giant started its program in 2009. It appears as though burritos, like caffeinated beverages, encourage repeat purchase behavior.

A boon for Chipotle

Digital sales increased 8.6% year over year and represented 42.8% of overall revenue in the quarter. And this was compared to 202.5% year-over-year growth in Q3 2020. It strongly suggests that the use of technology will be a major factor in Chipotle's future success. The momentum the company gained during the pandemic is still present.

Having a greater proportion of business come from the digital channel boosts metrics like restaurant-level margin, net income, and free cash flow. Niccol pointed out that the leadership team is "also delighted to see that [our] highest margin transaction, digital pickup orders, is gaining traction." Of the 41 new locations opened in the third quarter, 36 were equipped with a Chipotlane, the company's popular drive-through option. Like Starbucks, Chipotle is experimenting with new store formats in order to serve customers in ways most convenient for them.

Chipotle has also done a wonderful job at gamifying the rewards experience. For example, the Rewards Exchange lets consumers customize how they redeem points, and Extras introduces personalized challenges to earn extra points and collect achievement badges. In another nod to its digital prowess, Chipotle opened up a virtual restaurant on the gaming platform Roblox during Halloween as a way for gamers to get an offer code for a free burrito in real life.

According to Niccol, Chipotle has retained 80% of the digital sales levels that it was seeing during the height of the pandemic. At the same time, the company has recovered nearly 80% of in-store revenue that it was seeing before the health crisis began. Niccol sees the overlap of the two groups at 15% to 20% today, so there is still lots of incremental growth evident.

Management's hope is to convert in-store customers to the digital side, and vice versa. Getting people to frequent stores more is the name of the game in a retail setting. Plus, finding more ways to connect with customers is critical to stealing market and mind share in the hyper-competitive restaurant industry.

Chipotle's focus on integrating technology into its operations is a key competitive strength that will help propel growth over many years.