Garnering a current market value of $51 billion, Chipotle Mexican Grill (NYSE:CMG) is a rare success story in the restaurant sector, where most businesses don't even make it past their fifth year. The company has become so popular as a result of its unwavering focus on fresh, local ingredients and fast service.

Revenue and net income soared 21.9% and 154.9%, respectively, in the most recent quarter compared to the prior-year period. And the business now has 2,892 locations in the U.S., Canada, and the U.K.

A key contributor to Chipotle's remarkable success centers on its menu innovation. 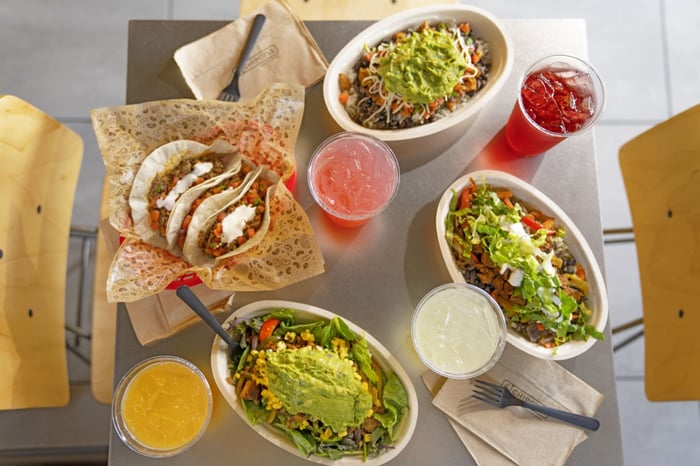 What can I get you?

The company famously has a small, simplified menu offering, with choices including burritos, bowls, salads, tacos, and quesadillas that can be customized to a specific liking. While this keeps the line moving and the throughput high, it also allows Chipotle to do a small number of things extremely well. Competitors Qdoba and Moe's Southwest Grill have much larger menus, but they're clearly not as successful as Chipotle has been.

Having a somewhat limited menu gives the company the opportunity to add new items over time in a prudent, calculated approach. Just this year alone, Chipotle has added three new menu items on a national scale. Cilantro-lime cauliflower rice was added in January, followed by the quesadilla in March. And most recently, the business introduced smoked brisket as another protein option.

Utilizing a stage-gate process for its menu innovation, Chipotle first tests new food in a select few markets before a potentially bigger launch. For example, the brisket was first on menus in Cincinnati and Sacramento, California, in fall 2020. Iterating and making adjustments based on customer feedback seems like a simple, no-brainer approach, but Chipotle does it better than anyone else in the restaurant industry.

The brisket is a limited-time option, and because of strong demand, it is expected to be on the menu only through November. But management expects to bring it back at some point in the future. Since it can control and drive interest and excitement around new food items, Chipotle is in a powerful position. The business is afforded the chance to be extremely selective and strategic about food additions solely because its existing menu is so successful.

On the Q3 earnings call, CEO Brian Niccol pointed out that the innovation machine is still running, adding: "And we're far from being done. Plant-based Chorizo is currently being tested in a couple of markets, and our talented culinary team is in the early stages of developing other exciting menu items."

New menu introductions gain immediate exposure to Chipotle's customer base, thanks in large part to the company's strong digital infrastructure. As of Sept. 30, the business counted close to 25 million rewards members. From Chipotle's perspective, these loyal customers provide an extremely valuable communication and engagement channel. And customers not only get to stack up rewards points that can be used for future food purchases, but they also gain advantages non-rewards members don't have.

When brisket was launched on Sept. 21, it was only available to digital members for the first two days. And when Chipotle finally introduced the much-awaited quesadilla in March, it was offered as a digital-only entrée. Because the quesadilla takes longer to prepare, ordering it ahead of time for pickup or delivery doesn't disrupt the in-store flow.

Chipotle is in an enviable competitive position in a cutthroat industry. But by leaning on prudent menu introductions and its robust digital infrastructure, the stock is up almost 400% over the past five years. By being very strategic about new items and using a digital approach to drum up interest, Chipotle shareholders' appetites for market-beating returns have certainly been satisfied.