The Green Blockchain is being adopted worldwide.

Algorand (ALGO 0.17%) was created in 2019 by mathematician and MIT professor Silvio Micali, who was looking for a way to improve blockchain technology by making it decentralized, secure, and scalable. Algorand is a permissionless blockchain network that utilizes a form of proof of stake validation known as pure proof of stake. Permissionless means that anybody who possesses ALGO tokens (the native cryptocurrency of the Algorand blockchain) and is online can participate in the network by serving as a validator for transactions without using a large amount of computational power. 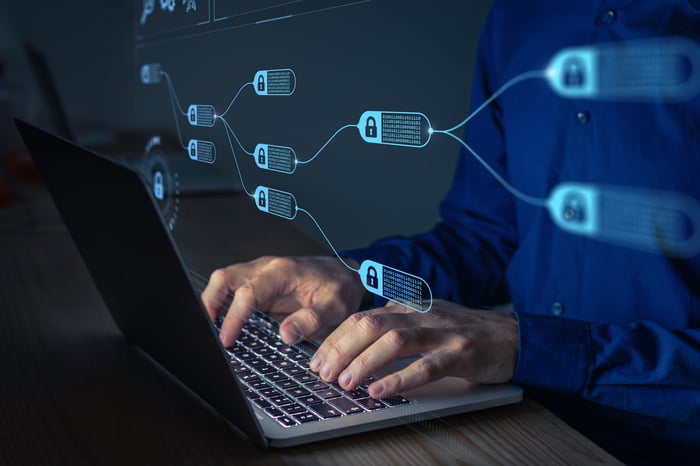 A proof of stake leader

Since its launch, it has grown to become a $12 billion asset, making it the 20th largest cryptocurrency by market cap. ALGO is up 550% over the past year, but it is simultaneously down 26% from its 52-week high. While it has become a major cryptocurrency, note that its market cap is still far lower than that of tokens with considerably less real world utility such as Shiba Inu or Dogecoin, and there is no fundamental reason that Algorand should not one day surpass these tokens in terms of market capitalization.

Expanding array of use cases

At the end of the day, any blockchain needs to have real world utility to have true staying power like Bitcoin or Ethereum. One of the key reasons that Algorand exhibits long-term potential is that Algorand is at the heart of a wide array of interesting and impactful use cases (or ways that the digital asset can be useful in real world applications).

Algorand was even chosen by the Marshall Islands to power its digital currency, the SOV. The Pacific nation chose Algorand for its "speed, scalability, security, and its ability to effectively implement required compliance controls and the transaction finality needed for a national currency." In a world where concerns about inflation seem to be everywhere, the supply of SOV will be algorithmically programmed to grow by 4% a year to prevent runaway inflation.

As a growing number of nations around the world explore digital currencies, additional nations choosing Algorand for this purpose could move the needle for the asset.

Even casual observers of the cryptocurrency landscape saw Elon Musk criticize Bitcoin mining for being bad for the environment due to its high level of energy intensity, and the temporary plummet that this caused in the price of Bitcoin (and the crypto market as a whole). Ethereum transitioned toward proof of stake in part to lower its environmental impact, and a host of publicly traded Bitcoin miners (companies that have built up industrial-scale mining rigs to mine for Bitcoin and either keep it on their balance sheets or sell it for a profit) like Argo Blockchain (ARBK), Greenidge Generation (GREE), Cipher Mining (CIFR) and Hive Blockchain (HIVE) have focused on utilizing clean energy such as hydro and thermal energy to power their mining operations.

Micali was always concerned about the energy intensity of proof of work, stating "Algorand developed a public blockchain that runs on a version of proof of stake... which drives electricity consumption to almost zero... on a fundamental level. I care about the planet." The Algorand Foundation pointed out that the amount of energy needed to run a node on the Algorand network is so negligible that it can be done on a Raspberry Pi, a simple single-board computer used for teaching computer science in the developing world and in schools. Algorand is using its own blockchain technology in conjunction with ClimateTrade, a carbon credit marketplace, to track its carbon footprint and purchase carbon offsets to keep its overall footprint carbon negative.

With interest in environmentally friendly operations being a key factor in investment decisions across all asset classes, this focus on green energy is an attractive aspect of Algorand.

Cryptocurrencies are often volatile and Algorand is no different, but the growing level of adoption and real world use cases, the current market cap, and the green credentials of its blockchain mean that Algorand is a digital asset that should have plenty of blue sky ahead over the long term as its profile increases.