E-commerce stocks have struggled in recent months as the reopening of retail stores has shoppers spending more time offline. This has led to more investor uncertainty surrounding this sector.

However, as the holiday season approaches, many of these emerging internet and direct-marketing retail stocks have continued growing, albeit at a slower pace. Moreover, since November has traditionally been one of the stock market's best months, Chewy (NYSE:CHWY), Etsy (NASDAQ:ETSY), and Pinterest (NYSE:PINS) appear well-positioned to drive market gains. 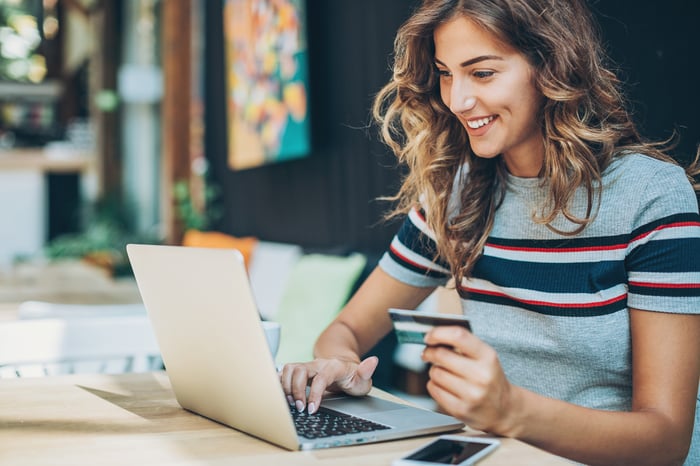 Chewy, an online retailer of pet supplies, has stood out by offering a higher level of personalized service. This personal touch and a 100% unconditional satisfaction guarantee have helped the company foster strong loyalty. With this success, its stock had made significant strides since its June 2019 initial public offering (IPO), rising more than fivefold from the IPO price in less than two years.

Still, investors sold it off as a receding pandemic led to more offline shopping. And higher ad costs and supply shortages have also hit the company. After surging to a high of $120 per share in February, it had lost almost half of its value by October.

However, the company might have begun a recovery. Since falling to just above $60 per share in October, it has since recovered to almost $80 as of the time of this writing.

Its financial performance remains robust. In the first half of fiscal 2021, which ended Aug. 1, Chewy reported revenue of $4.3 billion. This represented a 29% increase from the same quarter in 2020. Indeed, revenue growth could slow modestly as the company forecasts between $8.9 billion and $9 billion in revenue for 2021, a 26% increase.

Nonetheless, the company remains profitable for the year so far. Despite a $17 million loss in the second quarter, Chewy still reported net income of $22 million for the first two quarters of 2021. This is a massive increase from the $81 million loss in the same period in 2020. Limiting the growth in operating expenses to 24% helped Chewy turn profitable.

Furthermore, at less than four times sales, the multiple is just slightly above post-pandemic lows. Chewy's price-to-sales (P/S) ratio is also similar to that of Amazon (NASDAQ:AMZN), making it an affordable choice as the stock attempts a recovery.

Etsy prospers because it is not just an e-commerce platform, it is also a community. It limits its site to sellers of artisan products, vintage goods, and craft supplies. Moreover, interested buyers see Etsy as the place to find such goods, reinforcing the sense of community. While Amazon tried to copy this approach with Amazon Handmade, it has failed to displace Etsy as the hub for artisan goods, leading some analysts to label the company "Amazon-proof."

This success has not made it immune to the struggles of other online sellers. Its revenue growth slowed to 18% year over year in the third quarter of 2021. However, revenue for the first nine months of 2021 came in at $1.6 billion, a 45% increase versus the first three quarters of 2020. Net income of $332 million also surged 65% over the same period. Thanks to modest levels of other income and income tax benefits that did not materialize in 2020, income increases outpaced revenue.

Moreover, though the guidance for about 10% revenue growth in the fourth quarter represents a continued slowdown, investors shrugged off the news. Etsy stock climbed to all-time highs after the earnings announcement, taking the stock's growth rate to just over 50% for 2021.

Additionally, at a price-to-earnings (P/E) ratio of almost 80, it remains slightly more expensive than Amazon's earnings multiple of just under 70. Still, considering its much smaller market cap and growing dominance in its artisan niche, it likely will remain an attractive e-commerce stock in November and beyond.

Pinterest stock had recently fallen to 52-week lows as PayPal Holdings dispelled rumors that it planned to buy the company. And as more consumers stayed offline amid a pandemic recovery, Pinterest's growth has slowed compared with last year.

In the third quarter, Pinterest reported only 444 million monthly active users (MAUs), down from a peak of 478 million as recently as the first quarter, as year-over-year revenue growth came in at 43%.

Pinterest also continues to make huge gains with average revenue per user (ARPU). In the third quarter, global ARPU rose 37% year over year to $1.41. This means even with a temporary slowdown in MAUs, Pinterest can drive significant revenue gains.

Furthermore, the slowdown has taken its P/S ratio to 12. This takes it significantly below its sales multiple above 30 early in the year, and well under Shopify, which trades at 46 times sales.

Admittedly, e-commerce revenue growth might remain slow for a time. Nonetheless, with Pinterest continuing to drive ARPU and its stock trading at a discount, investors should consider treating the e-commerce slowdown as an opportunity to pin this stock.