The data center REIT sector will soon have a new option for investors. 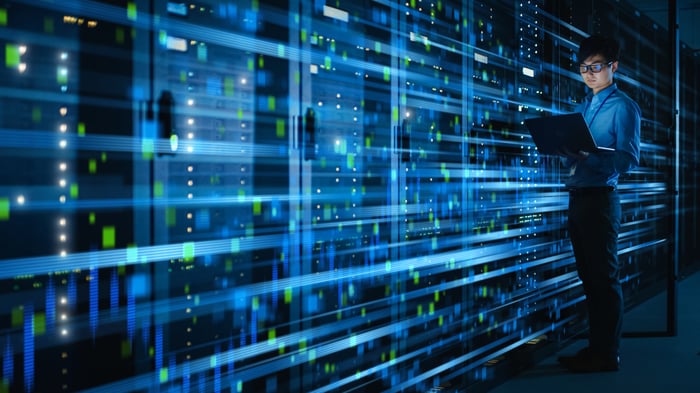 Switch has primarily grown through development. It built four of its five Switch Primes from the ground up. The company launched its fifth Prime earlier this year in Texas by acquiring Data Foundry for $420 million. Data Foundry owned data centers in Austin and Houston. It subsequently bought land from Dell Technologies, where Switch will build a new data center next to Dell's global headquarters.

Its steady expansion has enabled it to grow its revenue and adjusted earnings before interest, taxes, depreciation, and amortization (EBITDA) at a 14% compound annual rate over the last five years. Also of note, Switch has excellent ESG characteristics, including sourcing 100% of the power for its data centers from renewable energy.

Why the data center operator is making the Switch

Switch announced in August that it was exploring the potential of converting to a REIT. The main driver was the company's desire to enhance shareholder value after its stock underperformed data REITs in recent years. That caught the eye of activist investor Elliott Investment Management, which concluded the market had undervalued Switch. That led it to invest in the company and work collaboratively to find ways to unlock shareholder value, including exploring a REIT conversion.

Switch decided earlier this month that converting to a REIT was the right move. It's aiming to complete that conversion on Jan. 1, 2023. That will give the company time to determine which assets qualify as a REIT and set up a taxable REIT subsidiary for the rest.

A new option in an evolving sector

Switch will join a data center REIT sector in transition. There were five REITs focused on operating data centers to start this year. However, private equity giant Blackstone Group (BX -1.45%) recently took QTS Realty Trust private in a $10 billion deal. Meanwhile, rumors are currently swirling around CyrusOne (CONE). That company's CEO recently left, and multiple news sources reported that it's exploring strategic alternatives, including a potential sale. Analysts believe it's only a matter of time before CyrusOne agrees to a deal, since they've heard it has received several compelling offers.

If CyrusOne agrees to a takeover deal, investors would have one less data center REIT option. The three remaining include data center giants Equinix (EQIX -1.25%) and Digital Realty Trust (DLR -0.70%), along with smaller REIT CoreSite Realty (COR). Switch would provide investors an alternative to this trio, as it's a smaller, faster-growing REIT.

Switch operates a premium data center business that has been growing at a healthy clip for years. However, the market hasn't given it enough credit for that value creation or its future growth potential. That's leading it to make the switch to a REIT. This entry will give REIT investors an attractive new option to consider.

Another Data Center Stock Is Hitting the Road

Is Switch's Dividend in Trouble?

This Stock Could Make You a Happy Investor

2 Stocks That Could Make You a Pot of Gold