Lidar sensor maker Luminar Technologies (LAZR 7.05%) has kept its focus on autonomous transportation, leaving other use cases for the navigation technology to its competitors. That strategy has paid off today, as the company announced a big win with semiconductor specialist Nvidia (NVDA 7.20%). Investors poured into Luminar stock this morning, driving shares up more than 36% in early trading. As of 10:30 a.m. EST, shares settled back with a gain of 24.5%. At the same time, Nvidia shares gained 1.4% after also trading up more earlier, about 5%. 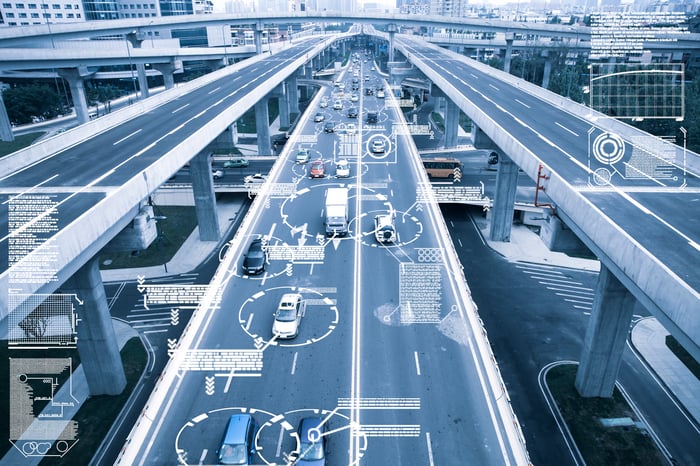 Nvidia's DRIVE Hyperion platform will contain multiple sensor technologies to provide a 360-degree view and will include computing power to allow data recording and replay. The vehicle computing platform with Luminar's sensors will begin production in 2024.

Luminar has worked to provide its lidar solutions for use in vehicles, leaving other sectors like agriculture, robotics, and mapping to other lidar companies. Earlier this year, Luminar said it will become the standard provider to Volvo Cars for its upcoming flagship electric version of the XC90 SUV launching next year.

But the selection for semiconductor industry leader Nvidia's autonomous driving platform is a broader win for the company. Luminar founder and CEO Austin Russell noted in a statement, "Nvidia has led the modern compute revolution, and the industry sees them as doing the same with autonomous driving."

Investors seem to agree that the inclusion of Luminar's lidar with Nvidia's solutions is a major step for the company's growth ambitions. Ultimately the acceptance and eventual market for autonomous vehicles will determine just how big a win this is for Luminar.