A look at this year's performance offers a clue.

Cardano (ADA -0.94%) has soared more than 1,100% this year. The dynamic young cryptocurrency has even outperformed heavyweights Bitcoin and Ethereum -- they climbed 130% and 559%, respectively. Today, Cardano is the fourth-biggest cryptocurrency by market value. Its market capitalization totals more than $75 billion.

Cardano has fallen from this year's high. But that doesn't mean gains are over. That's because this cryptocurrency is at the very beginning of its growth story. If it picks up momentum, we could see a serious increase in market value. Again, let's look at one of its bigger peers. Ethereum's market value tops more than $500 billion. That seems almost out of reach. But it may not be. To get there, Cardano doesn't even have to gain as much as it's already gained this year. Can it do that by 2023? Let's find out. 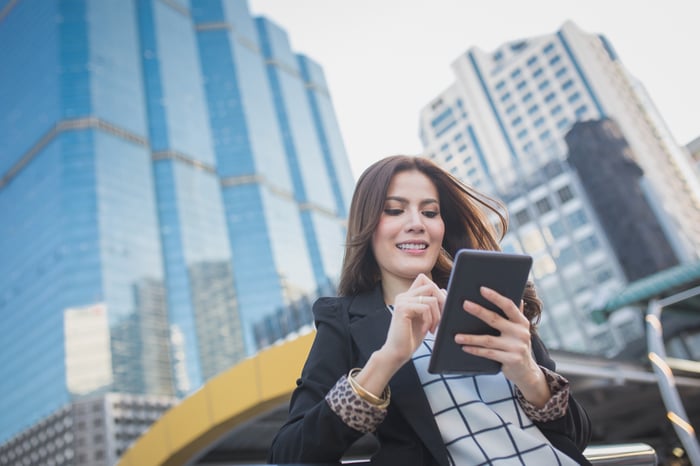 First, some background. Cardano's cryptocurrency is called "ADA" -- and investors can buy the coins as an investment or use them for transactions. Cardano currently has more than 33 billion coins circulating. But a cap has been set at 45 billion. This idea of a limited number of coins available could be an element to drive gains in Cardano.

But there's more to Cardano than just the coin. Much like Ethereum, Cardano is a blockchain platform that allows for the execution of smart contracts. These are self-executing contracts with terms written into the code. One major area for the use of Cardano is in the financial world. Through its decentralized system, Cardano aims to facilitate banking and financial services globally. For instance, users can store documents on the blockchain that could be used for opening a bank account. Cardano also could be of use in other fields where users must store personal or sensitive information and then make it available to another person or organization.

What makes Cardano particularly interesting is the speed of its transactions and the fact that it's eco-friendly. When it comes to transactions, Cardano processes about 250 per second. That's compared with about 30 for Ethereum. Cardano also is likely to please investors because it uses less energy than some of its peers. In one year, Cardano uses six gigawatts of energy -- about the same as two power plants. By comparison, Bitcoin uses more energy than the Netherlands in one year. And most of Cardano's energy use is renewable.

All of this is great. But why do I think Cardano is in its early days of growth? That's because Cardano has mapped out five phases of development -- and work in these areas is far from over. The ultimate goal is to make the system truly self-sustaining.

Of course, this won't happen overnight. So does this mean Cardano's market value will stagnate -- or quickly gain? Price predictions vary. Some say Cardano may reach more than $10 as early as next year. While others predict a price of about $3.50 by that time.

For Cardano to reach about $500 billion in market value, it would have to gain 563% percent to $15. That's using the number of coins currently circulating. This seems like a huge leap. That said, Cardano climbed much more than that this year alone. So, if Cardano makes progress in its five phases of development, it's possible this innovative cryptocurrency could surprise us with another meteoric rise by 2023.