Declining revenue and a high debt load represent significant threats to the payout.

During the third-quarter earnings call last week, Lumen Technologies' (LUMN 4.66%) management surprisingly announced that it is maintaining the company's dividend. That sounds like good news for dividend-oriented shareholders attracted by its yield above 7%.

But considering the company's declining revenue, high debt load, and increasing investments, is the current dividend sustainable beyond the short term? Let's find out. 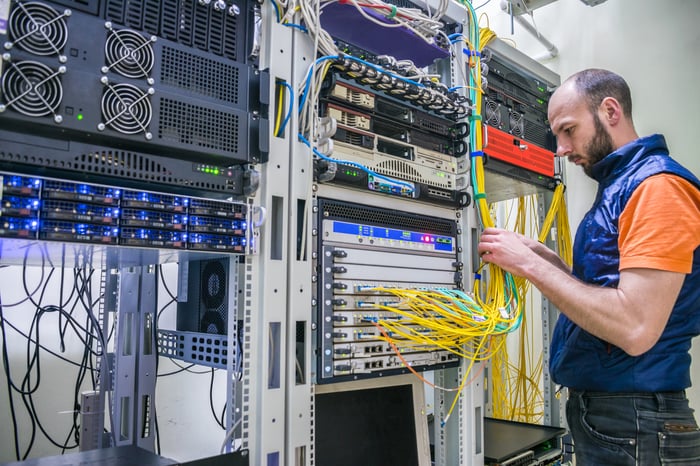 Lumen Technologies, formerly known as CenturyLink, has been facing the decline of its legacy network infrastructure. Indeed, enterprises and consumers have been replacing their voice and DSL lines with better cable, fiber optic, and wireless technologies. As a result, the company's revenue has been declining over the last several years, and the third quarter was no exception. Revenue fell 5.4% year over year to $4.9 billion.

Yet, with a focus on cost reductions, the company's adjusted earnings before interest, taxes, depreciation, and amortization (EBITDA) stabilized year over year at $2.1 billion. And the lower-than-expected capital expenditures contributed to an increased free cash flow of $1 billion, up from $800 million in the prior-year quarter.

The dividend is largely covered, but...

Within that context, Lumen's generous dividend, which represents an annual cash outflow of $1.1 billion, seems still largely covered by the anticipated free cash flow in the range of $3.6 billion to $3.8 billion this year. But investors should realize the company is facing several challenges that could put its dividend at risk.

Thanks to its strong free cash flow over the last several years, Lumen managed to reduce its debt load. However, that debt load remains significant at approximately $31 billion at the end of the third quarter. It corresponds to 3.6 times the midpoint of the company's anticipated full-year adjusted EBITDA in the range of $8.4 billion to $8.6 billion. 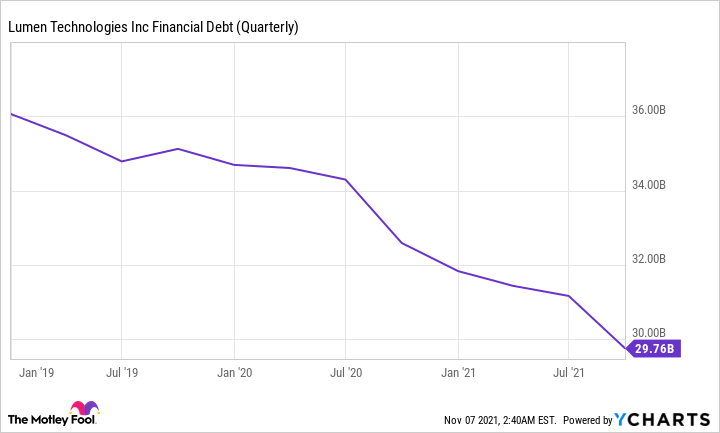 Besides, Lumen can't indefinitely offset shrinking revenue with reduced investments to support debt reduction with free cash flow. Over the long term, insufficient investments will lead to further declines in revenue and free cash flow, since the company needs to update its legacy networking infrastructure with modern technologies to keep up with the secular demand for better networks.

Management didn't quantify these investments yet, but it announced these efforts will lead to an extended timeline (without more details) to lower the net-debt-to-EBIDTA ratio from 3.6 to a range of 2.75 to 3.25. But it also expects those investments will finally lead to revenue growth in a couple of years.

The dividend remains at risk

Considering the need for extra investments in the context of declining revenue and high debt load, management highlighted some pressure on the dividend during its second-quarter earnings call. But surprisingly, it announced last week it will maintain the dividend.

Granted, the company should receive approximately $7 billion from divestitures in 2022, which it can use to reduce the debt load. However, those divestitures will also reduce EBITDA by approximately $1.7 billion. That means that with increased investments, annual free cash flow could drop below $2 billion after the divestiture of assets. This would not leave much margin of safety to keep reducing debt and paying out $1.1 billion for the dividend.

So with revenue expected to continue declining over the next two to three years, coupled with the delayed deleveraging goals, sustaining the dividend represents a risky decision. The company will depend on the success of the deployment of its fiber optic assets over the next several years to support such a strategy.

Thus, investors looking for annual income from dividends should realize Lumen's payout remains at risk. Management seems optimistic about finally growing revenue in a couple of years to support the company's generous cash outflow, but any bump in the road could lead to a reduced payout.

Lumen Plunges on Its Dividend Cut: Is the Stock Now a Bargain or a Value Trap?
410%