Hyliion Holdings (NYSE:HYLN) reported on Tuesday that it lost $26.6 million in the third quarter, or $0.15 per share, as it continued to work through supply chain challenges that have pushed out launch dates for its upcoming hybrid heavy-truck powertrains.

While investors should be concerned about those delays, the good news (such as it is) is that Hyliion's loss was narrower than expected. The company isn't well covered on Wall Street, but four analysts who responded to a Thomson Reuters poll expected the Texas-based start-up to report a loss of $0.23 per share on average.

An update on Hyliion's go-to-market plans

Hyliion has two products in the works: The first, called Hybrid eX, is a hybrid system that can be retrofitted to existing diesel-powered heavy trucks. The second, called Hypertruck ERX, is a completely electric heavy-truck powertrain designed to work with an onboard power source, such as a generator burning natural gas or (eventually) a hydrogen fuel cell. Both can be fitted to trucks made by any of the six leading heavy-truck manufacturers.

Hyliion said that the Hybrid eX system is now shipping and that it has delivered the first unit to a fleet customer. It expects to begin recognizing revenue from sales of the system in the fourth quarter. But it also said some of the deliveries it had expected to make before the end of the year have been delayed until early 2022 due to shortages of key components amid global supply chain disruptions. 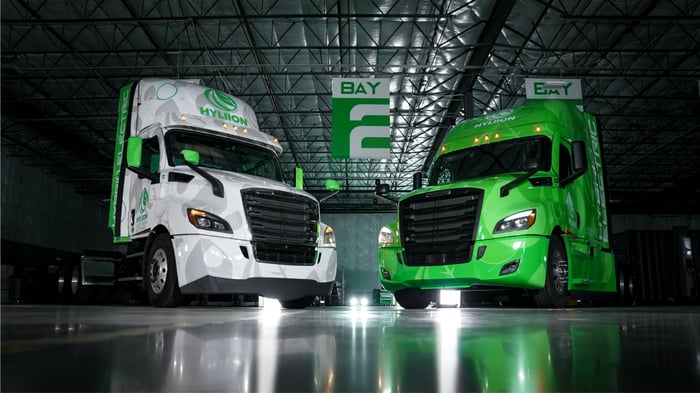 Those disruptions have also hit the development of the Hypertruck ERX, Hyliion said. A key issue: Hyliion needs to buy more heavy-truck chassis to complete development and testing of the system, and heavy-truck makers (like automakers around the world) have been forced to limit production amid global shortages of semiconductors and other key components.

Hyliion said that it has ordered all of the trucks it expects to need in 2022 and is currently working to secure build slots for 2023. As of right now, it expects to complete design verification and initial on-road fleet testing of the Hypertruck ERX powertrain by the end of 2022. That will be followed by additional fleet trials and the regulatory-approval process, as supply issues allow, before deliveries of the powertrain begin.

Hyliion also reported that it has added Elaine Chao, the former secretary of transportation, and Mary Gustanski, the former chief technology officer of Delphi Technologies, to its board of directors.

The company doesn't expect to need additional cash ahead of the launch of the Hypertruck ERX.