Shares of several related stocks are ripping higher today, suggesting that investors are feeling especially bullish on the prospects of the EV industry. Besides a general tailwind from the passage of the EV-friendly infrastructure legislation earlier this week, the successful IPO of Rivian, and some positive attention from Wall Street, it's clear that investors are eager to park EV stocks in their portfolios.

As of 11:56 a.m. EST, shares of several EV-oriented stocks have driven higher: 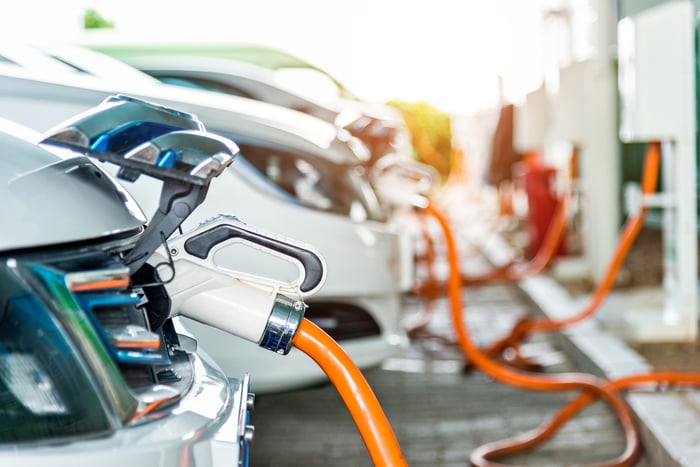 While the positive effect of legislation moving out of the House with $7.5 billion in funding to develop EV charging infrastructure on EV stocks is tapering off, it's still worth noting. Since one of the main concerns of potential EV customers is the fear of not having a convenient place to recharge, the recently passed legislation assuages a significant concern, leading investors to suspect that increasing EV sales are coming down the road.

With regards to Nio, investors are surely encouraged today after hearing a vote of confidence from Wall Street. Keeping a buy rating on the stock, Jeff Chung, an analyst at Citigroup, raised his price target to $87 from $70, according to Thefly.com. The new price target represents some serious upside -- about 120% from yesterday's closing price of $39.55.

Similarly, news from the Street seems to be buoying Fisker's stock today as well. Yesterday, an analyst from Bank of America, John Murphy, lifted his price target to $24 from $18. Murphy's bullish perspective was the second in as many days; on Tuesday, Dan Levy, an analyst at Credit Suisse, initiated coverage on the stock with an outperform rating and a $32 price target. According to Streetinsider.com, Levy said, "With electric vehicle (EV) uptake sharply inflecting and the market lacking sufficient model options, Fisker offers a compelling value proposition -- sleek product at a high-volume price point."

EVgo investors, on the other hand, aren't reacting to favorable commentary from analysts. Instead, the stock's rise today can be attributed to the company's Q3 2021 earnings report. Beating analysts' revenue estimates of $5.4 million, EVgo reported sales of $6.2 million for the recently completed quarter. The company's profitability in the quarter also provided a pleasant shock for the EV-charging stock. While analysts expected the company to report a loss per share of $0.08, the company delivered earnings per share of $0.09.

Besides the surprises on the top and bottom lines, EVgo delighted investors with its more auspicious forecast for 2021. Originally, EVgo had provided guidance of $20 million for 2021; however, it upwardly revised that to $20 million to $22 million. In addition, the company foresees a narrower loss in 2021. Instead of negative adjusted earnings before interest, taxes, depreciation, and amortization (EBITDA) of $58 million, the company now is guiding for adjusted negative EBITDA of $54 million to $58 million.

Although it's worth acknowledging analysts' bullish price targets on Nio and Fisker, it's critical for prospective investors to remember that Wall Street's time horizons are oftentimes much shorter than the longer investing periods that we prefer. Instead, investors should place greater importance on the company's performances.

In the case of Nio, investors have plenty to dig through as the company has cars on the road -- unlike Fisker, which is still preparing to commence deliveries of its vehicles in Q4 2022. Regarding EVgo, it will be interesting to see if the company achieves its revised guidance, and what it foresees for 2022.