Qualcomm, NetApp, and Cisco don't seem too exciting -- but they can all provide stable returns and dividends if the market melts down.

Growth-oriented investors often shun dividend-paying tech stocks for a simple reason: Companies that are still expanding rapidly tend to reinvest their cash into their own businesses instead of paying dividends. Tech companies typically only start paying dividends after they run out of ways to expand their business with investments and acquisitions. 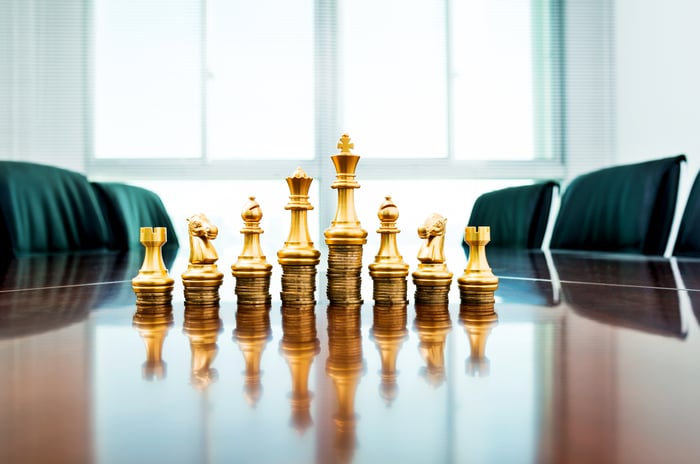 Qualcomm is one of the world's leading makers of mobile chipsets and baseband modems for smartphones. It also owns a massive portfolio of wireless patents, which grants it a cut of every smartphone sold worldwide.

In recent years, Qualcomm faced tough competition from MediaTek and first-party chipsets from Apple, Samsung, and Huawei. Its licensing business also faced pressure from antitrust regulators, who claimed its fees were too high.

However, Qualcomm's "best-in-breed" reputation kept smartphone makers lined up for its newest chips, and it gradually resolved its antitrust issues. As a result, its adjusted revenue rose 55% in fiscal 2021 (which ended in September) as its adjusted earnings more than doubled.

This year, analysts expect Qualcomm's revenue and earnings to grow 18% and 25%, respectively. The company's growth is cyclical, but it returns a lot of its free cash flow (FCF) to its investors.

In fiscal 2021, Qualcomm paid out 74% of its FCF with $3.4 billion in buybacks and $3 billion in dividends. It reduced its outstanding shares by nearly a quarter over the past five years, even as its stock price advanced more than 140%, and it currently pays a forward yield of 1.6%.

Qualcomm's yield may seem low, but its stock is cheap at 15 times forward earnings, and it remains a linchpin of the smartphone market. That low valuation and long-term growth potential make it a rock-solid investment.

NetApp was founded nearly three decades ago, and it usually isn't considered a high-growth company. In fiscal 2021, which ended in April, its revenue only rose 6%, and its adjusted earnings per share stayed nearly flat.

That slowdown was primarily caused by the pandemic's impact on its orders from enterprise customers. But in fiscal 2022, NetApp expects its revenue to rise 8%-9% and for its adjusted earnings to jump 19%-24% as those headwinds fade and the cloud market continues to expand.

NetApp reduced its share count by nearly 20% over the past five years and currently pays a forward yield of 2.2%. It trades at just 18 times forward earnings, making it a rare dividend-paying value play in the cloud market.

Cisco is the world's largest manufacturer of networking switches and routers. It also bundles that hardware with cybersecurity services, communications hardware and software, and other enterprise applications.

Cisco's growth decelerated over the past two years as its main infrastructure business was disrupted by the trade war, the tech war, and the pandemic. But in September, it unveiled fresh growth targets for the next four years in its investor day presentation.

Cisco expects to grow its total revenue at a compound annual growth rate (CAGR) of 5%-7% between fiscal 2021, which ended this July, and fiscal 2025. It also expects its adjusted earnings to rise at the same rate.

It believes it can achieve those targets by increasing its subscription-based revenue, reducing its dependence on its legacy switches and routers, and expanding its portfolio of newer technologies for the automation, remote work, cloud, security, optical, and Internet of Things (IoT) markets.

Cisco also set a long-term goal of returning at least 50% of its FCF to investors through buybacks and dividends. That should be easy to achieve, since Cisco already spent 42% and 19% of its FCF on dividends and buybacks, respectively, over the past 12 months. It also reduced its share count by more than 15% over the past five years.

Cisco isn't an exciting growth stock, but it generates steady returns while paying out a forward yield of 2.6%. The stock is cheap at 17 times forward earnings, and it should remain resilient if the market takes a dive.