The energy drink company is on a caffeine-fueled onrush of growth that even major supply chain hurdles can't dampen.

Beverage company Celsius Holdings (CELH -3.06%), a plucky newcomer to a market overshadowed by giants such as Monster Beverage, reported blazing revenue gains in its third-quarter (Q3) earnings report on Nov. 11. The stock market responded positively, bidding its share price up by more than 4% by market close, even though supply problems and the aluminum can shortage made it miss on earnings. Here are three reasons why investors' fizzy optimism about the company may be justified.

1. It's slurping up profits from eager customers

Setting a new revenue record as its U.S. sales jumped 214% year over year and international sales grew 5%, Celsius saw its total quarterly revenue surge 157% to $94.9 million compared to Q3 2020. One of the strongest drivers of its growth was its direct store delivery (DSD) network, where distributor revenue grew 429%. DSD is a distribution method involving shipping products directly to the stores where they will be sold from the manufacturer's production facility, rather than sending them to the store chain's distribution center first. The use of DSD maximizes product freshness and often improves sales by giving individual stores the opportunity to quickly restock their inventory as it sells out. 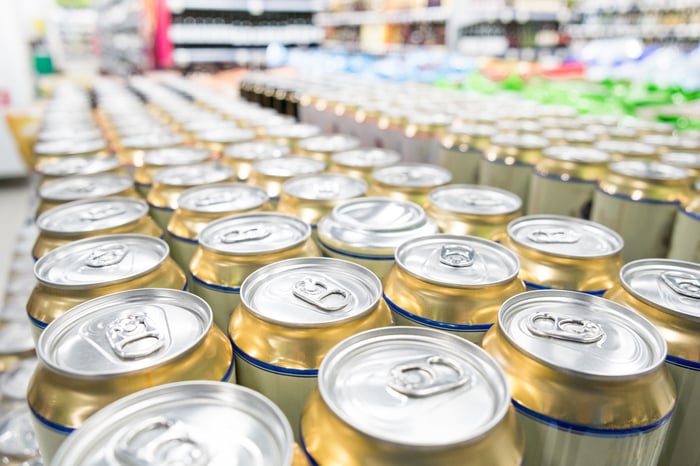 These results show skyrocketing popularity, combined with a flexible, responsive business model used by Celsius to make the most of opportunities, with its strong DSD network as a good example of that flexibility in action. In addition to its energy drink line with its focus on good flavor, along with natural ingredients to appeal to customers aiming for a healthy lifestyle, its introduction of FAST protein bars to its main American market also appears to be successful.

CEO John Fieldly, during the Q3 earnings conference call, said selling of FAST bars is "going extremely well and actually increased 50% in the third quarter from the prior Q2 run rate," adding the bars "taste great, initial feedback has been extremely positive in the U.S." Supply was an issue since the bars are imported from Europe, but near-future American production is planned. This shows that while Celsius isn't neglecting its main energy drink business, it's also branching out into adjacent markets, giving it additional ways to profit and more resilience against temporary swings in demand.

2. It has strong gains in the teeth of supply and economic headwinds

The disruptions to the economy and supply caused by the massive COVID-19 lockdowns of the past year-and-a-half are taking some toll on Celsius, despite the company's strategic energy. The aluminum can shortage, which had been building for years but was kicked in high gear by COVID-19, is ongoing. CEO Fieldly noted many of the cans Celsius ordered haven't yet been delivered, stating "many are still outside of the United States brand or waiting at ports to be unloaded." While the company has partly offset the shortfall by buying cans from U.S. producers, higher aluminum commodity prices have made this option much more costly.

Increased costs and supply chain disruptions had a visible effect on Celsius' metrics. Its Q3 gross margins fell from 47.6% in 2020 to 39.7% in 2021. For the first nine months of the year, gross margin shrank from 2020's 45.8% to this year's 41.2%. Celsius says the additional input costs and transportation expenses cutting into the margins are likely transitory.

Quarterly net income declined 44% year over year to $2.7 million, though net income is up 6% overall for the year's first nine months. Its earnings per share (EPS) were $0.03, less than half the $0.07 EPS expected by Wall Street analysts. Nevertheless, it managed to grow adjusted earnings before interest, taxes, depreciation, and amortization (EBITDA) by 51%. Its EBITDA growth and overall performance show its effectiveness in continuing to grow despite the strong headwinds reducing its margins and net income.

3. It's laying the foundation for future growth

The beverage maker is actively working to extend its retail footprint, especially in the USA, its strongest market. It now has a presence in 92% of America's counties. Locations featuring its products increased 48% during the first nine months, to 118,000 outlets, with its convenience store footprint growing 72% in the same period. It also placed 900 coolers, with almost half (400) placed in Q3, showing its network growth is accelerating. It also says it has "additional expansion planned throughout 2021 and into 2022 as retailer resets take place." Once the brake of supply constraints and elevated costs is eventually released, this expansion strategy may win the company even stronger gains, or at least help it maintain its current momentum.

Celsius' swift rise over the past year-and-a-half resembles the surging gains made by Monster Beverage when the older company first "caught on" among consumers. While it's still dwarfed by established, successful giants like PepsiCo, Celsius is a young company among beverage stocks, with plenty of room to grow.

There is some risk from inflation, rising costs, and backed-up supply chains, but these apply to all businesses and aren't problems specific to Celsius. The popularity of its energy drinks and protein bars, mirrored in its explosively increasing sales, its adaptable direct store delivery strategy, and its aggressive retail footprint expansion, all point to a bright future for the enterprise and make its stock worth buying.

Rhian Hunt has no position in any of the stocks mentioned. The Motley Fool owns shares of and recommends Celsius Holdings, Inc. and Monster Beverage. The Motley Fool has a disclosure policy.

Is Celsius Stock a Buy Now?

Where Will Celsius Holdings Stock Be in 1 Year?

After Crushing the Market in 2022, Is It Too Late to Buy Celsius Holdings?

2022 Was a Sparkling Year for Carbonated Beverage Stocks
405%