PepsiCo's third-quarter earnings were so strong that it raised its guidance for this year.

Once a carbonated beverage is opened, it loses its fizz after a few days and a bit of its taste in the process. Unlike its billion-dollar Sierra Mist and Pepsi beverages, PepsiCo (PEP -0.08%) is showing no sign of losing its "fizz" or momentum as a company.

But does that make the stock a buy for dividend growth investors at this time? Let's dig into PepsiCo's operating results, balance sheet, and valuation to decide. 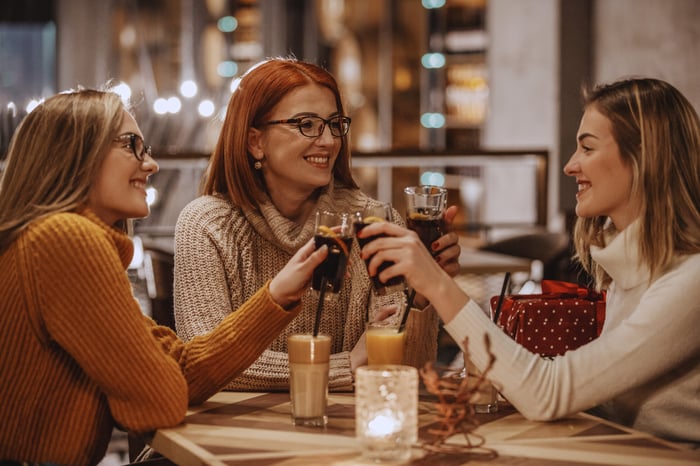 Third-quarter results were far from flat

PepsiCo managed to beat analysts' expectations for both revenue and non-GAAP earnings per share (EPS) in the third quarter.

Starting with net revenue, PepsiCo grew 11.6% year over year to $20.2 billion in the third quarter. It's worth noting that PepsiCo's reported revenue exceeded analysts' third-quarter estimates of $19.4 billion by 4%.

PepsiCo's robust top-line growth was driven by increased volumes in both its food/snack and beverage businesses. To this point, PepsiCo's food/snack volumes rose 4% in the third quarter while its beverage volumes advanced 8%.

The other component that propelled PepsiCo's net revenue upward was the price increases that CFO Hugh Johnston said partially occurred in the summer during PepsiCo's Q3 2021 earnings call. And with the company expecting to pass on more commodities inflation to consumers later this year in the beverage and snack-food businesses, it has the pricing power to keep revenue moving higher.

Due to its better than expected third quarter, PepsiCo raised its full-year organic revenue outlook from the previous forecast of 6% growth to 8% for this year. Unlike net revenue, organic revenue accounts for the effect of foreign currency translation, as well as acquisitions and divestitures. Given that PepsiCo has delivered 8% organic revenue growth in the first three quarters of this year, this seems like a forecast based in reality.

PepsiCo's growth forecast for this year looks healthy. But can the same thing be said about its balance sheet? Let's take a look at PepsiCo's net debt to earnings before interest, taxes, depreciation, and amortization (EBITDA) and interest coverage ratio to find out.

PepsiCo is the very definition of a blue-chip stock, which is evidenced by the fact that it has raised its dividend for 49 consecutive years. This comfortably places it among five dozen other S&P 500 stocks that have raised their dividends for at least 25 years, which makes PepsiCo a Dividend Aristocrat. With a dividend increase likely set for next year, PepsiCo is also on the verge of becoming a Dividend King.

Since analysts expect PepsiCo will generate $6.34 in non-GAAP EPS over the next four quarters and the current share price is $160, PepsiCo's forward price-to-earnings (P/E) ratio is 25.3. This is somewhat higher than the S&P 500's forward P/E ratio of 21.3, but I believe this premium is deserved given PepsiCo's quality.

PepsiCo offers investors a market-beating 2.7% yield, which is positioned to grow in line with the high-single-digit annual earnings growth that analysts are forecasting over the next five years.