Upstart reported strong earnings, so why is the stock plummeting?

Upstart Holdings (UPST 10.44%) has been on a roller-coaster ride, mostly up, over the past year. Since the start of 2021, Upstart's stock had increased nearly 670% before the company reported third-quarter earnings after Tuesday's market close. This has been primarily due to the company's flawless execution since coming public.

Despite yet another flawless performance in Q3, shares are down nearly 16% since the release came out. The likely culprit was the stock's amazing run-up so far. Because of this irrational market movement, now could be a wonderful time to add this lending platform to your portfolio. 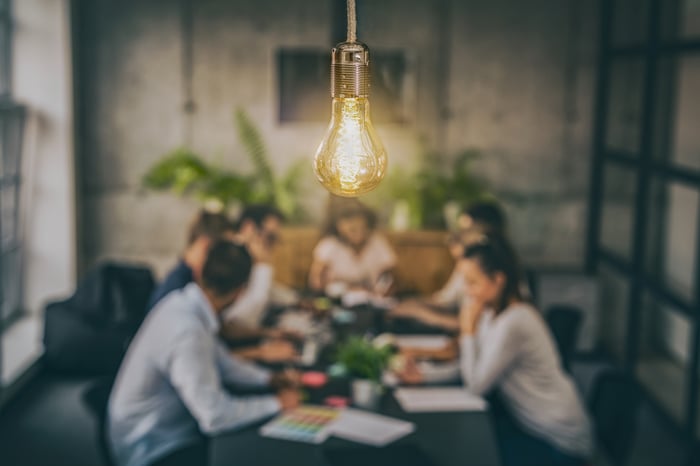 Most loan decisions made today are based on Fair Isaac's FICO credit score, which Upstart believes is often not a fair judgment of creditworthiness. If you have one past slip-up or no credit at all, you could be locked out of good loan options. Upstart claims it looks at thousands of other variables to determine creditworthiness. While its revenue still comes primarily from a few major partners, its system has been rapidly adopted by smaller banks looking to attract customers who have been hurt by the credit score.

It seems to be working -- and Upstart's latest quarter was simply wonderful. Loans originated from Upstart's decisions reached almost 363,000, totaling $3.13 billion, and grew 348% year over year. Upstart beat both revenue and earnings estimates, growing sales by 250% to $228 million and roughly tripling net income to $29.1 million. The conversion on rate requests -- how often Upstart's bank partners ended up giving out a loan after Upstart made a decision -- increased from 15% one year ago to 23% today.

The company's fourth-quarter guidance was also strong. Upstart is expecting Q4 revenue of $260 million, representing growth of 14% sequentially and 199% from the same period last year. Its Q4 net income guidance is $18 million, but its adjusted net income -- which takes out stock-based compensation -- guidance is $52 million. The company also raised its full-year guidance from $750 million to $803 million in revenue.

Upstart launched its auto lending service -- formerly Prodigy, which it acquired in early 2021 -- on Oct. 6, and it has already powered 4,000 auto loans in 47 states. The auto lending market is six times the size of the personal loan market, so this part of Upstart's business is expected to grow astronomically over the next five years. The downside to this, however, is that in the short term, contribution margins -- Upstart's version of gross margin -- will decrease. With the scale-up of auto, the Q3 contribution margin decreased from 54% to 46%. And because of continued growth in auto volumes, this is expected to continue.

The valuation of Upstart going into earnings was a staggering 60 times sales. At that kind of valuation, Wall Street isn't satisfied with a strong beat-and-raise quarter. With valuations this high and such a strong run-up before earnings, there might not have been any result that would have caused the stock to go up. While nothing went wrong in this quarter, it is sensible that the market may have needed to take a breather.

Just because the quarter went well doesn't mean there aren't plenty of risks associated with Upstart, however. First, Upstart has yet to go through a financial downturn, which is often a key milestone for financial companies, especially ones that are lending. Right now, it is easy to lend, and it is easier for people to pay back their loans. However, when the economy falls, it will be a true test to see how good Upstart's algorithms are. As long as Upstart's revenue continues to rise and the company gains more partners, investors should be comfortable knowing that its algorithms are correct. After all, if its algorithms are poor, customers will end their relationships with Upstart.

Second, the company has major customer concentration. At the end of 2020, one customer accounted for 67% of all loan volume. This has been steadily decreasing since, and in the third quarter, that partner only represented 58% volume. This is likely due to the fact that Upstart has been rapidly increasing its customer count. Upstart had 31 lending partners in Q3, compared to 10 the year before. With this kind of growth in partners, resulting in greater revenue diversification, its biggest customer will likely make up less of Upstart's total volume.

For risk-tolerant investors who can deal with volatility and have not yet added Upstart to their portfolio because of its fast run-up this year, the market is giving you an opportunity. Despite an astounding quarter, the stock is dropping like a rock. In this case, the market's decision is quite irrational, and investors who have wanted to add Upstart to their portfolio should consider this an opportunistic time to buy a high-quality company at a discount.

While the stock has already skyrocketed this year, there is still room for investors to make money over the next five years. Upstart is trying to disrupt $750 billion in loan volume, and considering it just had $3 billion in this quarter, the company has plenty of growth left. I believe that Upstart is one of the smartest places to invest money today -- especially at this discount -- and I plan on adding to my position before the year's end.