The stock market had a quiet day on Monday, as investors seemed content to consolidate some of the gains they've enjoyed over the past month or so. Early gains evaporated today, but the market was able to avoid losses as well. The Dow Jones Industrial Average (DJINDICES:^DJI), the S&P 500 (SNPINDEX:^GSPC), and the Nasdaq Composite (NASDAQINDEX:^IXIC) were little changed by the end of the day.

Even though the broader market didn't do a whole lot on Monday, a couple of key companies came out with earnings reports after the closing bell that led to impressive gains for their respective stocks. Below, we'll take a closer look at why Axon Enterprise (NASDAQ:AXON) and Lucid Group (NASDAQ:LCID) were making big gains following their latest financial releases.

Axon Enterprise was up more than 17% in after-hours trading Monday. The maker of Taser stun guns and various camera and software systems for law enforcement told investors exactly what they wanted to hear. 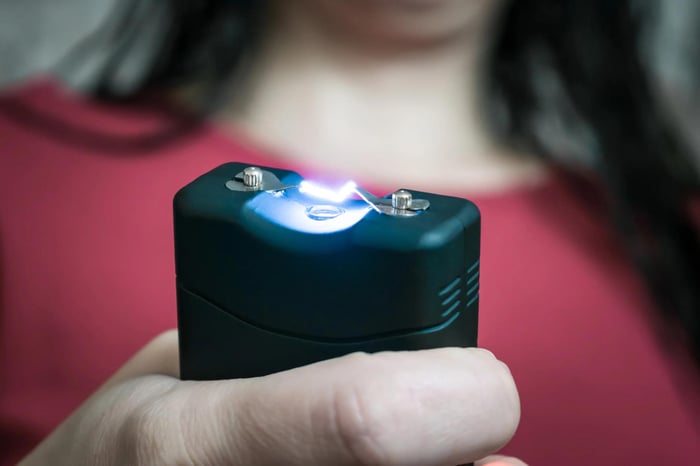 Axon's third-quarter financial numbers were impressive. The company reported record bookings in the quarter, rising 54% year over year as more customers signed up for Axon's software and sensor products. In just nine months, Axon has already managed to bring in more bookings than it did in the entire year during 2020; sales rose 39% from year-ago levels, and recurring revenue rose at an even faster 42% pace.

Yet it was Axon's longer-term strategic vision that impressed investors the most. The company nearly doubled its estimate of its total addressable market, as it has gradually expanded its geographical reach, its target customer base, and its product lines. Moreover, with estimated penetration of less than 2%, Axon could see accelerating growth for years to come.

Shares have been consolidating massive long-term gains throughout much of 2021, but the after-hours gain was enough to push the stock back toward its all-time highs. That could be just the beginning if Axon can execute well on its business strategy.

Meanwhile, shares of Lucid Group were up almost 3% after hours, adding to gains from the regular session. The electric vehicle (EV) manufacturer announced its results for the first time as a publicly traded company, and investors were generally pleased with the progress it has made.

Third-quarter financial results were fairly predictable, given Lucid's pre-production status. The company celebrated the $4.4 billion in cash brought in when it went public via a merger with a special purpose acquisition company, and it has used some of that capital to build production capacity, prepare for vehicle deliveries, establish a global retail network, and foster growth in its core business operations. Specifically, the beginning of production at its Casa Grande plant in Arizona was the first step in ramping up to production capacity of 90,000 vehicles annually by 2023, and Lucid brought in 13,000 new reservations worth an estimated $1.3 billion.

CEO Peter Rawlinson sees great promise for the Lucid Air, which won the 2022 Motor Trend Car of the Year award. With more than 500 miles of range, the vehicle helps to ease the concerns many would-be EV drivers have about being able to get where they need to go without combustible fuel.

Lucid is trying to differentiate itself from Tesla (NASDAQ:TSLA) and other EV manufacturers by emphasizing quality. It could take a while for Lucid to build up critical mass, but investors like the early signs of success they've seen so far from the company.