Investing in high-yield dividend stocks requires an investor to watch for the warning signs of an unsustainable payout.

The investing environment of the last decade has been characterized by low borrowing rates, which is backed up by the fact that the average yield of the 10-year Treasury hasn't surpassed 3% since 2010. This reality of no decent options for income investors aside from dividend stocks has pushed the S&P 500's average yield down to a measly 1.3% -- hardly enough for an investor's portfolio to pay their bill, let alone keep up with inflation.

That has investors looking for viable (yet still safe) alternatives. One stock with a high dividend yield that arguably shows a minimal risk of being cut is the experiential real estate investment trust (REIT), VICI Properties (VICI -0.12%).

Here are three reasons I believe this stock can afford to maintain its enviable 4.9% dividend yield. 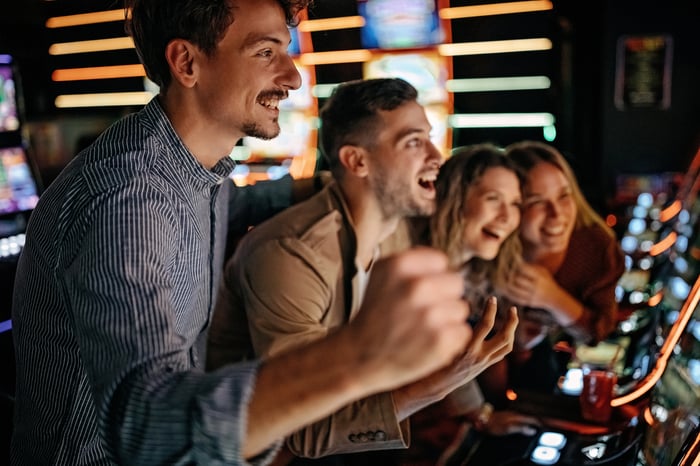 A common reason a stock ends up cutting its payout is that it starts generating an excessive debt burden to maintain the dividend. Doing so brings the prospect of a credit-rating downgrade unless the dividend is slashed. Whereas yield traps often face the risk of a downgrade to their credit rating, VICI Properties is actually on its way to being upgraded to an investment-grade credit rating.

The credit rating agency S&P Global hinted at a potential credit upgrade of VICI Properties to BBB- (the lowest investment-grade credit rating) in an August note after the latter announced its intent to acquire MGM Growth Properties (MGP). S&P Global stated, "The acquisition will improve VICI's scale and tenant diversity such that it could support a greater level of leverage at a higher rating."

S&P Global is correct in its assertion that VICI Properties' size and scale will improve from its acquisition of MGM Growth Properties, which is expected to close in the first half of next year. In fact, VICI Properties' portfolio of iconic Las Vegas and regional properties will expand from the present 28 to 43 upon completion of the deal. And the stock's total cash rent for this year will nearly double from $1.5 billion to $2.6 billion after the acquisition is complete.

As S&P Global alluded to in its note, VICI Properties will also benefit from a major boost in its tenant diversity from a finalized MGM Growth Properties deal. That's because the company's largest tenant -- Caesars Entertainment (CZR 2.31%) will account for a plurality of this year's rent at 42% -- barely ahead of MGM at 39%. Considering that VICI Properties started with a 100% concentration in Caesars when it was formed in 2017, this is significant progress in diversifying its tenant base.

2. Its dividend payout ratio has plenty of cushion

Another reason that VICI Properties' dividend is in little danger of being chopped is because its trailing 12 months adjusted funds from operations (AFFO) per share payout ratio is quite low at 69.5%.

A manageable payout ratio serves two functions for a REIT such as VICI Properties. The first is to provide a buffer in the event of a temporary decline in its earnings power, which will allow a dividend to at least be maintained. And the second purpose is to allow a stock to retain the capital necessary to drive future earnings growth and dividend increases. With a dividend payout ratio low enough to withstand a moderate drop in earnings and VICI Properties retaining about 30% of its AFFO to reinvest in its business, the stock checks both boxes.

3. VICI Properties has a business that is steadily growing

While a low payout ratio is important, it's equally important that a high-yielding dividend stock be a consistently growing business. If the bottom line for a business is constantly shrinking, a low payout ratio won't be enough to stave off a dividend cut at some point down the line.

This impressive business performance helps to explain why VICI Properties' board of directors was confident enough to authorize a 9.1% increase in the quarterly dividend earlier this year.

Despite VICI Properties' high-single-digit annual growth profile, the stock appears to be favorably priced for long-term investors seeking a safe and growing payout. That's because using company AFFO per share guidance for this year and the current share price around $28.74, the stock trades at a P/E multiple of just 15.5.

This $45 Billion Merger Could Create an Interesting REIT Investment Opportunity

VICI Properties Has Emerged From the Pandemic Stronger than Ever
420%