A major REIT acquisition will put most of the Las Vegas Strip's real estate under the control of one company.

MGM Resorts (NYSE: MGM) started MGM Growth Properties (MGP) in 2016, Caesars Entertainment (NASDAQ: CZR) followed with VICI Properties (VICI 0.50%) in 2017, which helped fund its merger with Eldorado Resorts. And along the way, Blackstone, Simon Property Group, Invesco, Crown Acquisitions, and others have acquired real estate in Las Vegas. The goal of most of these deals has been to monetize real estate and maintain the hotel and casino operations in an "asset-light" entity.

This week, the monetization of real estate took a massive step forward when MGM Growth Properties agreed to be acquired by VICI Properties. Once the deal is closed, VICI Properties will own a majority of the real estate on the Las Vegas Strip, a huge shift of power in the industry. 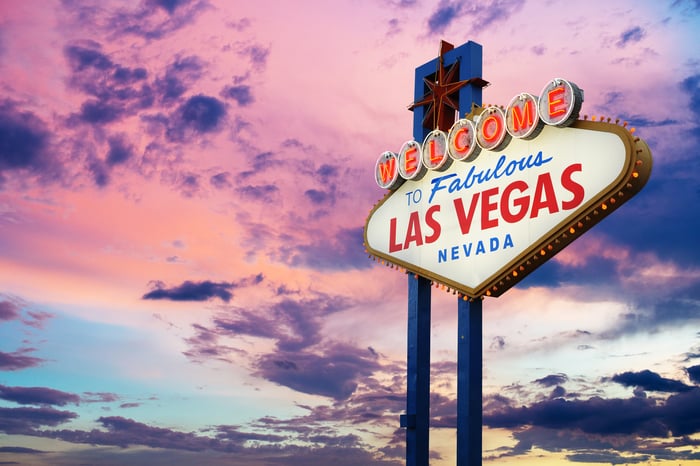 Given the cash MGM is getting and the debt that will no longer be consolidated on the balance sheet, we could see MGM Resorts reduce its net debt by over $8 billion after this deal closes. For MGM, the asset-light model is being executed quickly, and that could be a positive if Las Vegas recovers from the pandemic.

VICI is now the name in gambling real estate

This will add valuable gambling real estate and long-term leases to the growing REIT. As part of the deal, MGM will enter a new triple-net master lease that will total $860 million in annual rent for 25 years with three 10-year options to renew. Rent will rise at 2% annually for the first ten years, and the greater of 2% or the consumer price index (capped at 3%) thereafter.

This adds a very long-term tenant, reducing VICI's risk from relying too much on Caesars Entertainment. Now it's tied largely to the success of the Las Vegas Strip overall, along with a growing number of regional casinos also on the balance sheet.

For MGM, the idea is to simplify the balance sheet and the business model. The downside is that the company loses control of valuable Las Vegas real estate for development purposes, making new resorts much more complicated to develop.

MGM also now has rent as a fixed expense each month, rather than the flexibility that comes with owning real estate. If a financial crisis or pandemic hit, MGM won't be able to sell real estate to survive or monetize its own REIT. The company will have to cut costs or raise money elsewhere.

This is what's known as operating leverage, and if revenue rises MGM will benefit disproportionately from the increase in revenue because rent costs will be fixed. But if revenue drops, it'll hurt even more than before.

REITs are a common investment vehicle and own a huge amount of real estate, from hotels to restaurants to malls across the country. So this isn't shocking, and MGM giving up control of its own REIT to VICI was maybe inevitable given the amount of cash that this gives MGM.

But investors should understand the risks that come with this new REIT model. MGM has a huge fixed cost to pay for going forward, and won't own real estate that it can develop into the next great Las Vegas Strip resort. This is a change for Las Vegas, but one that's been coming for a few years now.