The consumer-direct mattress specialist reports third-quarter results on Monday afternoon. Wake up. You can't sleep through this.

It's time to see what side of the bed Casper Sleep (CSPR) woke up on for its latest quarter. The direct-to-consumer seller of mattresses, pillows, beddings, and other home essentials reports fresh financials after Monday's market close, and there's a lot riding on the report.

Casper Sleep has been a profitless disappointment since going public at $12 a share last year. The stock has plummeted more than 70%, becoming a cautionary note in the bedding industry. When Truist analyst Keith Hughes downgraded shares of Casper rival Purple Innovation (PRPL -5.37%) last week, he pointed out that Purple's falling behind the competition may have some viewing it as the next Casper. That's not a compliment.

Expectations are low, and the upside is substantial for a stock that would have to more than triple just to get back to its debut price point. Is this a stock worth buying ahead of its upcoming financial update? You don't exactly have time to sleep on it, with the earnings report now just hours away. Let's size up Casper Sleep's current prospects and the long road back it faces. 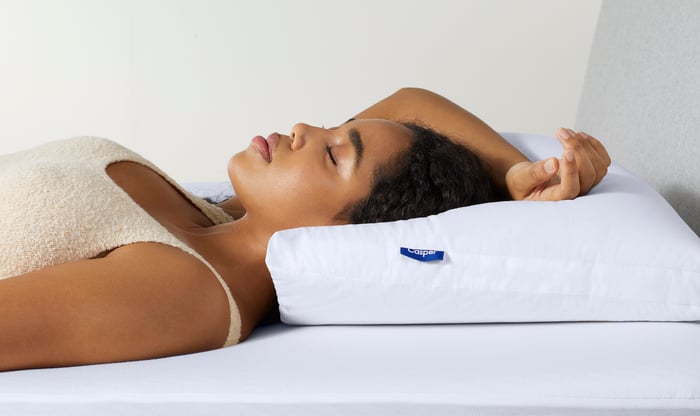 Casper Sleep had the initial misfortune of hitting the market weeks before the pandemic would shutter retail outlets. This could've been seen by some as a tailwind for the industry -- as folks spending more time at home would make replacing lumpy mattresses a high priority -- but it didn't play out well for Casper Sleep investors.

As investors rallied behind other companies that made sheltering in place more comfortable -- including online furniture retailers, direct sellers of bean bag chairs, and smart bed pioneers, Casper slept through the rally. It did manage to grow its sales 13% through last year's challenges, but that was a little more than half of its 2019 pace and less than a third of its 43% top-line clip from 2018.

Revenue has climbed 25% through the first half of the year, but the red ink continues to gush at the other end of the income statement. Casper Sleep even posted a larger-than-expected quarterly deficit last time out, and that's not a good omen heading into this week's financial update.

Its guidance for the third quarter back in August called for another loss on negative adjusted EBITDA. It sees $152 million to $159 million in revenue for Monday's report, an increase of 26% at the midpoint. Its full-year top-line guidance of $580 million to $610 million for all of 2021 suggests that revenue will slow to single-digit growth in the fourth quarter. Given the industry's recent supply chain struggles, this isn't a deal-breaker, but investors will be hoping for a bullish revision guidance if they want to see the stock follow suit.

The climate isn't kind for Casper Sleep. Piper Sandler analyst Peter Keith even downgraded the stock last week, lowering his rating from overweight to neutral and slashing his price target from $8 to $3.50. His downgrade followed Purple Innovation's downbeat quarterly update. He thinks the gross margin pressures that tripped up Purple Innovation last week could weigh on Casper Sleep's performance as a fellow direct-to-consumer mattress specialist. I guess you can say that this analyst thinks Casper Sleep is the next Purple Innovation, but there's no table turning when both bowls are empty.

Keith is concerned about how weak revenue growth and deteriorating margins for Casper Sleep in the fourth quarter will bleed into next year. Investors will do some more tossing and turning, it seems, but don't dismiss the chances for a big bounce from the stock with a small penny stock price if the news ultimately lands somewhere on the palatable end of terrible.

The Fall and Rise of Casper Sleep Stock
413%