The graphics specialist is about to foray into a lucrative market.

Nvidia (NVDA 2.84%) has been a top investment this year as share prices of the graphics card specialist have soared nearly 133% in 2021 on the back of terrific growth in its revenue and earnings.

However, the stock has switched into a higher gear of late, as the chart below shows. This terrific acceleration in Nvidia stock can be credited to positive Wall Street commentary and the company's potential to take advantage of Facebook parent company Meta Platforms' vision of creating a metaverse that aims to bring users into a virtual world where they could do things that they do in real life, such as work, play, or attend sports events, among others. 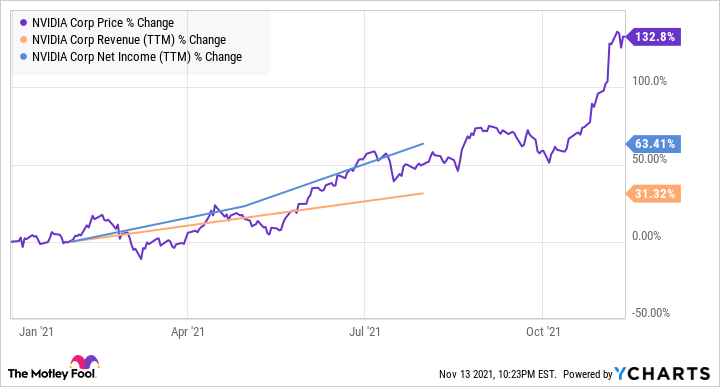 Nvidia is expected to win big from the metaverse, as the graphics specialist already has a solution -- Omniverse -- that could simulate reality and help Meta Platforms develop its platform. Let's see why this could be a big deal for Nvidia and power the stock higher in the future.

The metaverse could unlock a huge opportunity

Nvidia's massive market share in graphics cards places it in a solid position to benefit from the metaverse. That's because graphics cards will be the basic building blocks of the metaverse, as they will play a key role in rendering augmented reality models in real time.

According to a third-party estimate, the growing application of graphics cards in the fields of augmented reality and virtual reality will be one of the many catalysts for the GPU (graphics processing unit) market, which could hit $200 billion in revenue by 2027 as compared to just $20 billion in 2019. Nvidia can tap into this huge opportunity with its Omniverse solution that uses multiple GPUs to render resource-hungry scenes in real time. 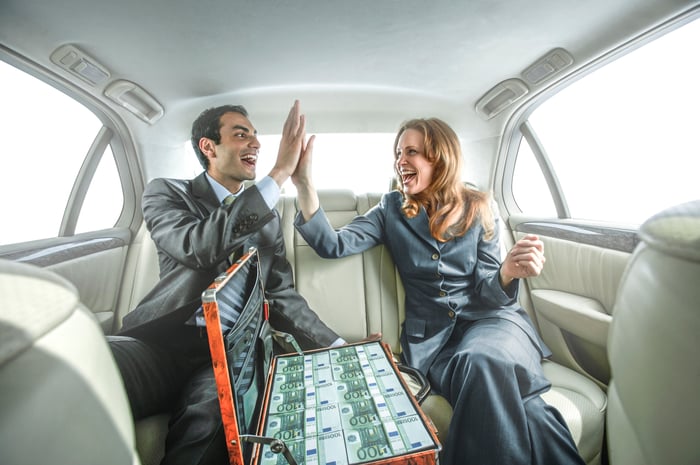 Nvidia also points out that Omniverse "natively supports multiple GPUs in a single system and will soon support interactive rendering across multiple systems." Additionally, Omniverse gives developers the ability to build applications and allows users to interact in real time with the help of ray-tracing technology that's currently used in Nvidia's graphics cards. In simple words, developers are expected to turn to Nvidia's Omniverse to create applications for the metaverse.

Not surprisingly, Wells Fargo analysts estimate that the adoption of Nvidia's Omniverse could witness a spike as enterprises turn to the platform to enhance productivity using real-time simulation. The investment bank recently increased its price target on Nvidia stock to $320 from $245, pointing out that it could become an enabler of the metaverse and unlock a revenue opportunity worth $10 billion over the next five years.

This looks like a big deal for Nvidia, considering that the company has generated nearly $22 billion in revenue over the past four quarters.

Nvidia has yet another catalyst to justify its expensive valuation

So, the metaverse could give Nvidia's business a big boost over the long run as we saw above. Throw in the catalysts in the video gaming and data center markets, and it becomes easy to see why analysts expect the company to record 30%-plus annual earnings growth for the next five years.

Nvidia, however, could grow at a faster pace once it starts making money from new opportunities such as automotive, cloud gaming, and now, the metaverse. All of this makes Nvidia a top growth stock to buy right now despite its expensive valuation.

The stock is trading at 109 times trailing earnings and 65 times forward earnings, which is quite rich when compared to the S&P 500's earnings multiple of 29. However, Nvidia's rapid growth -- and its ability to sustain the same -- justify the expensive valuation. The chipmaker had recorded 68% year-over-year revenue growth in the second quarter of fiscal 2022, while earnings had jumped 89% on the back of terrific growth in the data center and video gaming segments.

And now, with more catalysts in the fray, Nvidia investors can expect the good times to continue.