PubMatic and Fiverr just delivered fantastic Q3 earnings reports, and both have bright futures that investors could still profit from.

Fiverr (FVRR 5.64%) and PubMatic (PUBM 1.93%) delivered their third-quarter results last week, and investors liked what they saw: Their shares jumped by 12% and more than 40% respectively in the wake of those reports. That's good news for their established shareholders, but investors who haven't already gotten in on the action may be wondering if they missed the boat on these high-quality companies.

The answer, simply, is no. When looking at Fiverr and PubMatic, it is clear that both companies still have tons of growth ahead of them, and are early in their stories. Here's why I think they are great investment choices at their current levels. 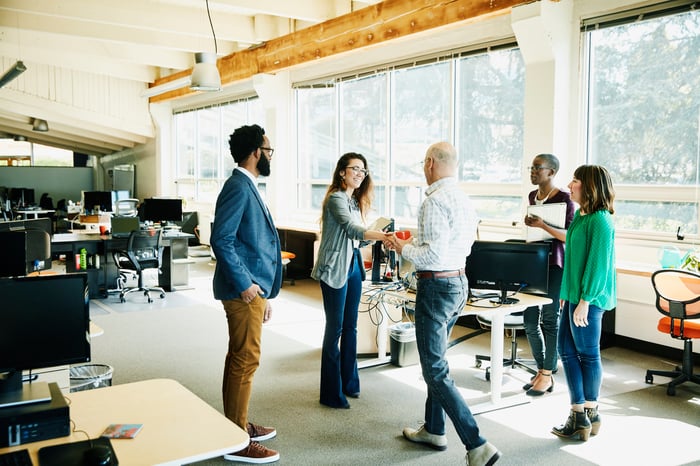 Fiverr is looking to be more than just a marketplace where employers can find freelance workers. It wants to become an ecosystem where businesses and freelancers alike can grow. While its business model got a boost from the COVID-19 pandemic, it is not a pandemic stock. Businesses have been increasing their use of freelancers for years, and this trend likely won't stop. Some of Fiverr's growth was pulled forward by the pandemic, but that growth is continuing as restrictions are reduced.

In the third quarter, revenue grew by 42% year over year to $74 million, and the number of active clients looking to hire freelancers rose 33% to 4.1 million. Customers have also increased their spending by 20% to $234 per buyer. Fiverr expects 2021 revenue to be 48% to 52% higher than 2020 revenue, reaching about $294 million. It generated $9 million in free cash flow in the third quarter, compared to $6 million in the year-ago quarter, but its net loss represented 19% of revenue -- which is an increase compared to both Q2 2021 and Q3 2020.

The major risk that Fiverr has is competition from Upwork (UPWK 3.02%). Upwork makes more revenue, but Fiverr has been growing much faster since before the pandemic. Since 2018, Upwork's top line has grown by 134%, but Fiverr's has grown by 350%, and it looks like the stronger business today. Many investors see Fiverr as solely a pandemic investment, which is likely why shares are 44% off their all-time highs. But this is far from the case.

Looking at its Q3 growth rates and management's guidance, it is obvious that Fiverr can continue growing rapidly even as more companies are able to get back to having more employees on site. Fiverr is helping create the future of work, and its third-quarter figures indicate that it can be successful in a post-pandemic environment. That should give investors the confidence to add this stock to their portfolios today.

Sell-side adtech player PubMatic is more of an up-and-coming company, but it could quickly become a market leader. It crushed its Q3 estimates, and the stock jumped nearly 30% on the day after it reported earnings last week. Adtech companies, which connect advertisers and publishers, were expected to have a rough third quarter after Apple and Google announced that they were banning cookies on their platforms. Cookies provide adtech companies valuable information about consumers, so losing them was expected to impair their businesses.

However, this was not the case for PubMatic. Unlike its major competitor, Magnite (MGNI 4.05%) -- which was hurt by these changes -- PubMatic was barely scratched. There were two main reasons why. First, Pubmatic has been developing a system that does not rely on cookies, obtaining information about consumers in other ways, and this method was successful in Q3. The company noted that over 66% of its revenue came from customers that used alternate identifiers for targeted ads.

Second, the company was successful in connected TV (CTV) advertising -- a medium that will absorb a rapidly growing share of advertising budgets over the coming decade. Last quarter, Pubmatic's CTV revenue grew by more than seven times year over year, and the company reached 154 CTV publishers -- up 25% year over year. Its successes in that arena led to impressive top-line growth: Q3 revenue grew 54% over last year to $58 million, net income grew 118% to $13.5 million, and both of these metrics flew past analysts' estimates. Another impressive milestone for the company was that its net retention rate reached 157%, compared to 110% a year ago.

Although Magnite is the leader on the sell-side of the adtech industry, PubMatic is starting to catch up. Magnite has been growing primarily by acquisition, while PubMatic's growth has been entirely organic. This suggests that if Magnite's spending spree ends, PubMatic could take over as the market leader. Ad spending is expected to reach $526 billion by 2024, and a fast-growing company like PubMatic could really capitalize on this massive market. This company's journey is still in its early stages -- and there's a long road for growth ahead of it.

Is There Any Rebound in Sight for Fiverr International Stock?