An appetite for exciting stories has distracted investors from more reliable businesses like Principal Financial Group.

The investing industry has a tendency to try and make stock-picking seem complicated. But in some ways, it's actually a fairly simple matter. We're all just trying to get the most bang for our buck, balancing our desire for profits with our appetite for risk. The rest is just details.

It's a reality that's been forgotten in the midst of all the jockeying to make the most of this economic recovery. For the better part of the past year and a half, traders have instead fallen in (and out of) love with meme stocks, poured money into all sorts of SPACs, and embraced digital payment tech players with little consideration for these companies' actual values. They just haven't had much attention -- or capital -- left to dedicate to more proven, better-valued organizations. 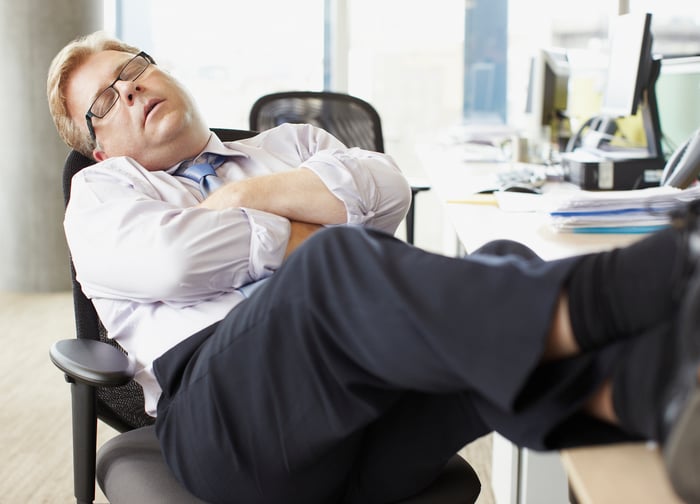 Their mistake, however, can be your opportunity. For example, you can step into insurer Principal Financial Group (PFG 0.86%) for little more than a song while Wall Street -- and most of Main Street -- remains distracted by noisier, headline-generating companies.

Bluntly speaking, the insurance business is boring. And the mutual fund business, which Principal Financial is also in, isn't a great deal more riveting. This lack of excitement is a big reason why this stock has fallen even further than usual off of Wall Street's radar of late.

A dynamic backstory, however, isn't a requirement for success. Indeed, sometimes a boring business model can bear a bountiful harvest.

That argument can certainly be made about Principal Financial Group. While the rest of the investing world has been on a roller-coaster ride over the past few years as a result of political and economic turmoil exacerbated by COVID-19, this insurer has simply continued to crank out growing earnings and revenue. The pandemic temporarily rattled results in 2020, but the company appears to have put that disruption fully in the past and is growing its top and bottom lines again. 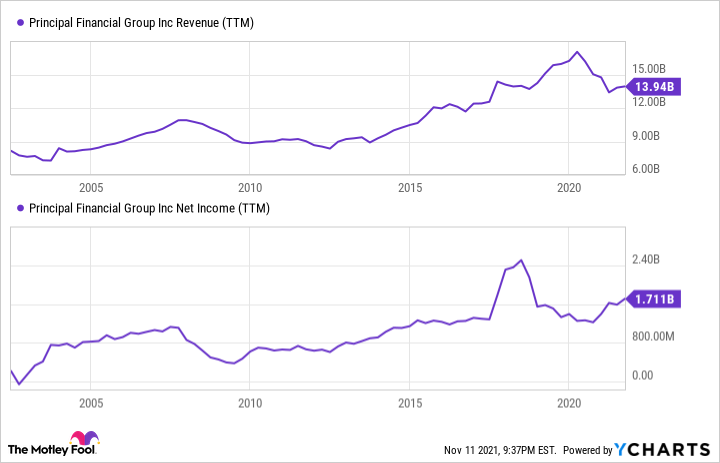 The bigger-picture growth isn't actually all that surprising though. In fact, it would be surprising if Principal Financial wasn't a consistent grower. That's because consumers and corporations alike always need some sort of insurance coverage, and while no two insurance providers are the same, these companies' actuaries are all working with largely the same data and coming to comparable payout/premium conclusions. The mutual fund business is a pretty consistent revenue driver as well, as it's tethered more closely to the market's broad performance than it is to Principal's fund managers.

Even more surprising is how investors as a whole have allowed this reliably productive company's stock to remain priced at 11 times its trailing profits, and only 9.9 times next year's projected earnings. That's below the company's long-term norms, which are traditionally lower than the broader market's norm anyway.

And yet that's not the most enticing reason to step into this stock right now. Principal Financial Group's dividend yield of 3.7% at current share prices is not only significantly stronger than the S&P 500's average yield of about 1.3%, it's also one of the highest yields among comparably sized companies in the financial sector. Management has boosted the payout by 49% in just the past five years, and there's little reason to think the next five years will look considerably different in terms of dividend growth.

A good fit for most portfolios

Exciting? No, that's not a term that could be used to describe Principal Financial Group -- not now, nor in the past, and probably not anytime in the future. Insurance is perpetually marketable, but it's far from a high-growth area. There aren't any game-changing revolutions in the works for the business either.

What this company lacks in pizzazz, however, it more than makes up for with reliability. It would certainly be a great way to round out a portfolio that has become overexposed to risky, high-growth names over the course of a wild year and a half on Wall Street.

Here's a High-Yield Dividend Stock You Can Trust

Why Shares of Principal Financial Group Are Trading Higher Today
405%