WWE bought out its main competition 20 years ago, but a young promotion seems intent on ending the champion's reign.

"In business, competition is never as healthy as total domination." Peter Lynch's quote from One Up On Wall Street is a warning that World Wrestling Entertainment (WWE 5.17%) investors should heed. WWE has enjoyed a 20-year reign as the preeminent sports entertainment brand. However, WWE now faces real competition for talent and viewers from upstart rival All Elite Wrestling (AEW), which could spell the end of WWE's dominant stock performance.

Prior to AEW's 2019 founding, WWE talent didn't have many real choices if they were disgruntled or cut from the roster. AEW has roughly one-third the number of stars as WWE, yet AEW is siphoning talent like a vacuum cleaner. Meanwhile, WWE has cut more than 70 individuals this calendar year alone. WWE and AEW's revenues are largely based on fans' interest in the talent on their respective rosters -- so a major shift in talent directly threatens WWE's growth. 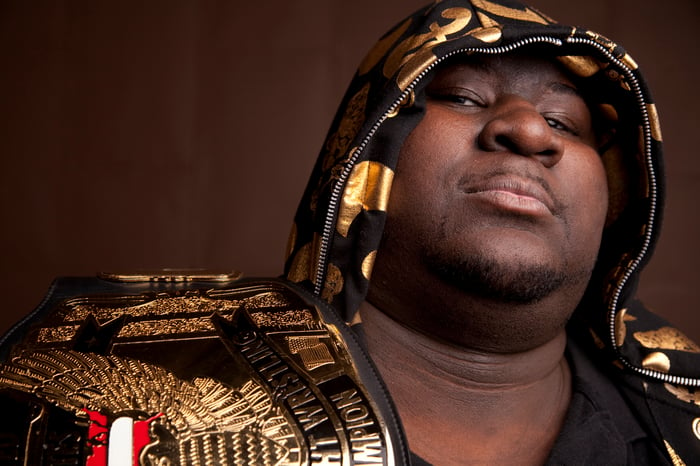 Many wrestlers get into the business around age 20, and given the wear and tear on their bodies, many wrestlers don't stay active much past 40. At first, AEW only seemed to attract older former WWE stars who were past their prime. However, this narrative seems to be changing.

AEW attracted three different former WWE champions, one in 2019 and two signed this year. WWE pushed their storylines, made them main-event talents, and then lost them to AEW. The widely popular CM Punk's return caused viewership of AEW's show Rampage to spike by more than 50%. These three former champions left WWE for greener pastures for different reasons, but one theme seems to stick out: They didn't believe in CEO Vince McMahon's vision for their characters.

WWE's creative team seems to be confusing its fans with the plan for future talent as well.  Many of WWE's recent roster cuts came from rookies the company just promoted to its biggest shows, Raw and Smackdown. Bringing along rookies, promoting them, and then firing them, doesn't seem like decision-making investors should embrace. WWE generally has a 90 day non-compete clause, so we don't know yet who else will land with AEW. However, AEW executive Tony Khan has openly expressed interest in "a few people."

Over the last five years, WWE shares have increased at a compound annual growth rate (CAGR) of more than 26%. But investors hoping for a repeat performance from the stock should be worried about WWE's creative direction.

During some of WWE's most successful years in the '80s and '90s, the company signed new television deals, expanded into new territories, and pushed new matches and promotions, including the first Wrestlemania. One of the key factors that drove WWE to prominence was the ability to create interesting storylines, promote pay-per-view matches, and then move on to other storylines.

The media rights deals WWE built off those decades of success have become one of the primary reasons why its stock has done well in the last few years. Media revenue represents nearly 80% of WWE's total top line. But in the last quarter, media revenue only increased by 1% year over year. Most of WWE's media rights contracts are set amounts for the TV rights over a certain number of years. This provides revenue stability, but could also lead to either a big win or big disappointment when these contracts renew.

In WWE's third-quarter earnings call, Chief Revenue Officer Nick Khan mentioned the last negotiation of the Raw and Smackdown rights in 2019. In that five-year deal, the company's popularity with viewers gave it enough leverage to increase its average annual media rights revenue from $170 million to $470 million. WWE stock seems to have already reaped the gains from these deals -- but by the time they're next up for negotiation in 2024, the company's fortunes may have dramatically changed.

The company's creative team now seems to believe it can do just fine by rerunning the same matches. Near the end of 2019, WWE announcer Corey Graves summed up the issue saying, "I am rematched to death." As Brandon Thurston of Wrestlenomics.com found in the first six months of 2021, 39% of WWE's main roster were involved in rematches -- even as the headliners at pay-per-view events. On the other hand, AEW's rematch percentage was just 4%. The company's talent acquisition streak allows dynamic matches that weren't previously possible. Ratings data from the end of October suggests AEW's novelty is helping it draw in viewers; for their Oct. 29 broadcasts, WWE and AEW held nearly identical viewership in the 18-49 age group.

This time could be different

In a strange twist, the COVID-19 pandemic locked down WWE's ability to promote live tours, but also saved the company tons of money. WWE didn't have the same production expenses, and it furloughed many performers. For the full year 2020, WWE revenue only increased 1% annually, but operating income jumped by 79%. With the return to live touring, revenue looks to be growing, but it's actually just returning to pre-COVID "normal." And increased production costs for those live events mean WWE's operating income is barely growing, either. In the most recent quarter, WWE's net income, adjusted for its DraftKings investment profit of last year, only increased by 1.9% annually.

Last year, WWE produced shows from its own facilities, with limited stars and no live audience. This year, by returning to live touring, the company has to pay for travel expenses, set up and tear down at each venue, and for COVID-19 safety protocols. WWE is cutting employees to try and retain its own profits.

During the COVID-19 lockdown, WWE paid its dividend instead of using that money to pay the salaries of multiple released wrestlers. Protecting the dividend is important to common shareholders -- and to CEO Vince McMahon. His majority ownership of WWE's Class B shares mean that a full $3.5 million of the $9 million in total dividends WWE pays out every quarter goes straight into McMahon's own pocket. When faced with a choice between preserving those lucrative dividends for himself and his fellow shareholders, or keeping more employees, McMahon seems to have put himself first.

Unfortunately, WWE investors must face two other issues. First, the shares' trailing P/E ratio of 37 is significantly higher than just a year ago, when it stood at 24. In short, WWE stock price has increased though the company's fundamentals seem to be deteriorating. Second, hedge funds seem to have lost some interest over the last year. At one point, 47 hedge funds  held WWE. By the fourth quarter of 2020, 29 funds owned the stock. By the end of the first-quarter 2021, 25 hedge funds held the shares.

AEW isn't going to sit around and let WWE have all the fun. WWE had a good run over the last five years, but the next few years look challenging at best. WWE investors should consider avoiding the entertainment stock until management can come up with a gameplan for its first serious competition in two decades.