In third-quarter earnings reported on Nov. 12, South Korea e-commerce juggernaut Coupang (CPNG 3.66%) announced quarterly sales growth of 48% year-over-year (YoY) but saw its shares drop 8% the following day. The sales increase was more than double South Korea's countrywide e-commerce growth rate of 20% -- a figure that has not gone below 20% growth for 12 straight quarters.

Coupang also grew its active customer base by 20% YoY to 16.8 million, marking its 15th straight quarter of 20% growth or more. In addition to this growth, three specific insights from Coupang's earnings show that it could become one of the premier e-commerce operations in the world -- and all at a lowered share price for investors. 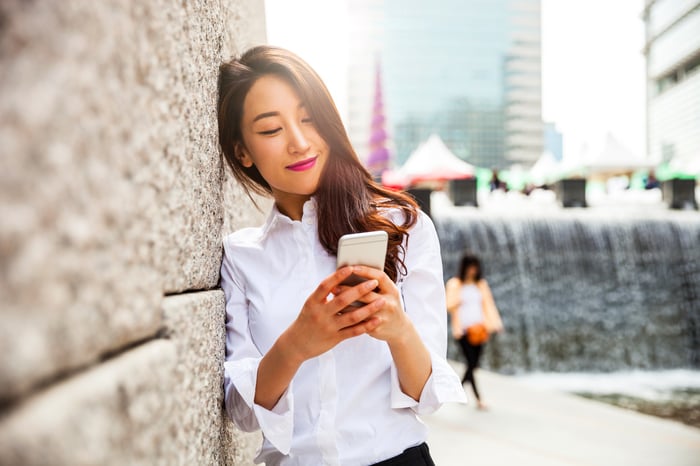 Founder and CEO Bom Kim highlighted that Coupang Eats became the most downloaded app for iOS and second-most for Android (behind a COVID vaccine app) in South Korea during 2021.  This rapid adoption of Coupang's food delivery service by customers looks like a leading indicator of a significant growth avenue for the e-commerce company moving forward.

Using the power of its stable cash-generating core operations and its $4 billion cash balance, Coupang has been investing heavily in its logistical and delivery networks. With a uniquely dense population, South Korea's small landmass could give Coupang a major efficiency advantage compared to peers such as Amazon and MercadoLibre.

Combined with advertising and a few additional items, Coupang Eats makes up the company's other revenue segment. By recording over $500 million in sales during Q3, other revenue grew by 113% YoY and now makes up about 10% of Coupang's total sales. Management has not provided a specific growth outlook for Eats but believes that it is still in the very early stages of expanding its food delivery network. While Coupang Eats is the primary driver of growth in this rapidly expanding segment, its advertising operations are equally impressive and offer additional growth optionality.

With a growth rate just shy of triple digits, Coupang's advertising operations are rapidly becoming a significant growth avenue for Coupang as well. Speaking to the importance of this burgeoning business segment, Kim stated: "Our monetization efforts are also gaining traction...We're still in the early innings and expect advertising to contribute significantly to margins in the future."

This highlights that although it is still a tiny portion of Coupang's overall sales, the advertising market's traditionally high margins could add to management's focus on building long-term cash generation potential. Although it's still somewhat hidden in $500 million in Q3 sales from the other revenue segment, along with its third-party and Coupang Eats sales, investors will need to watch for updates on this segment moving forward.

Due to the high capital spending required to build out its operations, it is best to view Coupang's overall progress through its gross profit growth and gross margin expansion. From 2020 to 2021, Coupang added as many new square feet of infrastructure as it had previously built in total before 2020. On top of this, it is projecting to double the infrastructure for its fresh grocery fulfillment centers in just 2021 alone. This expansion should ideally increase the profits that could be generated from more transactions.

Furthermore, due to COVID-19 restrictions and labor difficulties, Kim believes Coupang sacrificed five percentage points' worth of sales growth as it focused on fulfilling existing orders versus adding new ones. Though these lost sales hurt in the short-term, it should prove to be a wise long-term decision by keeping existing customers happy with its services.

Despite these headwinds, Coupang grew its gross profits by 62% for Q3 YoY, highlighting its potential to expand margins despite challenging conditions. In addition to this overall gross profit growth, Coupang's gross profit margin expanded from 14.9% to 16.2% YoY during Q3. Considering the company's high-margin advertising potential and consistently improving network effects, this high gross profit growth and gradual margin expansion should continue driving the stock's price performance as we advance.