Given the stock's 26% sell-off since last Tuesday's post-close release of third-quarter numbers, it would be easy to assume the worst for fuboTV (NYSE:FUBO). Not only did the company's habitual loss widen with its top-line growth, but one analyst also pointed to the growing loss as evidence that the company isn't likely to ever achieve fiscal viability.

And perhaps it won't.

The thing is, this pessimism misses a key point about fuboTV's future as a sports-oriented, virtual multichannel video programming distributor (vMVPD). The point is, fuboTV's business model doesn't rest solely on its admittedly crimped cable television segment. That segment is just a means to an end. The company's core moneymaker could eventually be the sports-betting business it's also trying to build. 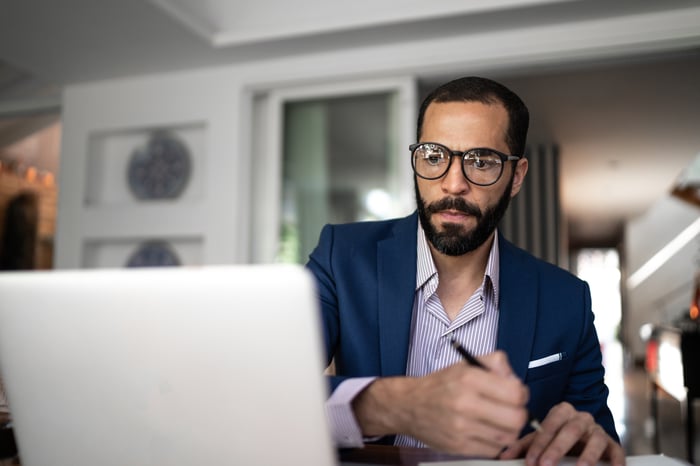 What did the analyst say?

LightShed's Rich Greenfield is the analyst in question. Following fuboTV's third-quarter results, he intimated that the company will never be a viable business since it's spending too much money on the wrong sports content, and too much to add paying customers. Greenfield ultimately concludes that fuboTV executives are hoping to "sell the company before everyone realizes how bad the underlying financial story actually is," likening it to the children's fable about the emperor unaware that he isn't actually wearing any clothes.

And he has a point -- sort of. fuboTV's roots and even much of its distinguishing content revolve around soccer and other lower-draw programming. Its cable lineup includes the offerings from networks like ESPN and Fox Sports, but this programming is relatively expensive for even the biggest carriers. For a smaller platform like fuboTV, with little scale (it says it has only about 1 million customers right now), buying broadcast rights for such content can be devastatingly expensive. Never mind the fact that bloated, overpriced cable plans are already falling out of favor anyway.

Being overlooked by most observers, however, is the potential of fuboTV's budding sportsbook business.

The financial potential of the world's legal sports betting business might shock some.

Estimates peg its current market value at anywhere from $130 billion to $220 billion per year, depending on the source. Even in the U.S., where sports betting has remained largely crimped by legal limits, Gabelli Securities research indicates that the industry's annual revenue is on pace to grow from $2.1 billion this year to $10.1 billion by 2028 as more states remove legal hurdles. And that outlook might underestimate the actual opportunity, given the unknowable amount of illegal sports betting presently taking place here and abroad.

To their credit, casino operators are embracing the opportunity when and where it presents itself. Last week, for instance, DraftKings (NASDAQ:DKNG) established sports betting at a casino in Connecticut. Caesars Entertainment (NASDAQ:CZR) introduced its sportsbook app for bettors in Louisiana in late October in front of the legalization of sports betting as of the beginning of this month. The American Gaming Association reports 29 U.S. states now allow legal sports betting of some sort, even if some of those don't (yet) allow app-based bets. That's up from practically none just a few years back.

Follow the trend. The business is getting bigger, even if it's doing so slowly.

fuboTV coming in at the right place, right time

And yet, for all the progress that's been made on legalization, the sports betting market remains fragmented and relatively poorly served by modern digital standards.

That's a key reason fuboTV stock remains an underestimated trade here; it's slowly but surely building a platform that melds the long-established business of cable TV with the relatively new business of app-based betting. And it's doing so when and where sports fans (as well as betting fans) want.

While fuboTV has been assembling the pieces needed to create a robust sportbook app (like December's acquisition of fantasy sports platform Balto), so far only one revenue-bearing, streaming-linked sports betting service has actually been launched. And that only went live at the beginning of this month, after the company's third quarter came to a close.

More are coming, though. fuboTV has also inked deals with the Chicago Cubs and the New York Jets, traditional casino operators like the aforementioned Caesars, and even sports leagues like Nascar. And that's just a sampling of what's to come. Some of these partnerships are just awaiting a legal green light where required.

As to the marketability of placing bets via a streaming television app? Well, this is arguably an even more compelling prospect. Consumer research outfit Nielsen Holdings reported earlier this year that half or more of the fans of the country's biggest professional sports leagues are also interested in placing bets on the games they're watching. In a similar vein, Horowitz Research says 80% of sports bettors are likely to watch the games they're betting on.

Combining the two different services into one integrated platform is a no-brainer.

fuboTV investors need to be patient

The toughest part about sticking with this trade is the amount of time it will take fuboTV to realize its vision. More and more states are legalizing sports betting, but it's an evolution being measured in years. Already logging big losses, fuboTV is likely to remain in the red for some time, during which LightShed's Greenfield is apt to point out that he tendered a warning.

Just keep the bigger picture in mind: fuboTV isn't just another streaming-cable name experimenting with a sportsbook app. It could almost be categorized as a sports betting play that leverages a cable TV operation as a marketing tool.

Either way, it's far too soon to dismiss the company as a lost cause.