If you have $1,000 to invest in a stock, the choice of where to put it can be overwhelming. In making that choice, there are a few things that should stand out about the stock: some killer advantage that gives the company a competitive edge, an efficient business model, and a long-term track record of doing well.

While there are more than a few stocks that fulfill those criteria, one, in particular, is S&P Global (NYSE:SPGI). Here's why S&P Global is a good option for long-term investors. 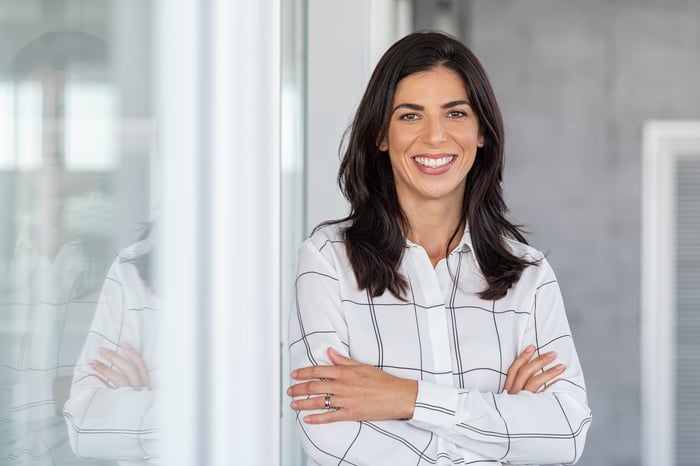 S&P Global has four business lines, the most well-known of which is its index business. S&P Global owns and operates all of the S&P indexes, as well as the Dow Jones Industrial Average through a partnership. It charges fees for listing on its indexes but most of its revenue comes from licensing its indexes to fund companies to use in their exchange-traded funds and mutual funds.

There is a licensing fee, as well as a small fee each time there is a transaction using the index. With the explosion of exchange-traded funds (ETFs), this has been a major source of revenue for S&P Global (and it's not expected to slow down anytime soon). It is one of three major players, along with MSCI and FTSE Russell. With arguably the biggest, most recognizable brand in this space, among only three major players, that's a major competitive edge.

But the index business is not even S&P Global's biggest revenue generator -- its credit rating business is. That business line has an even bigger competitive edge. S&P Global makes about 48% of its revenue from its credit ratings business, which generated $1 billion of $2.1 billion of the company's overall revenue in the third quarter. In this business, S&P Global is also one of just three major players, along with Moody's and Fitch Ratings. S&P and Moody's each have about 40% of the market share while Fitch is a distant third at 15% and that is pretty much it for competition. The credit ratings business, like the index business, is not one that lends itself to more than a few major players as there is a high regulatory bar to entry, but beyond that, the standard would be watered down if there were more than a handful of major competitors.

As one of just a few major players, this unit will always be a huge revenue generator, although it does fluctuate based on the amount of debt that is issued. As S&P gets a fee to rate an organization's debt issuance, revenue will reflect the volume of debt issuance.

But the great thing about this company is its diverse revenue streams. Beyond indexing and credit rating, S&P Global also has a growing market intelligence business, where it provides data, analysis, and research for investment professionals. This business is growing rapidly and is now the second-largest revenue generator, accounting for about 27% of income. S&P is in the process of buying HIS Markit, a London-based market intelligence company, which should help expand this business.

S&P's fourth and smallest revenue stream is Platts, which is a leading source for market data in the energy and commodities industries.

Because all of S&P's businesses are data- and information-based, there is relatively little overhead. Also, because they are subscription- and fee-based, the company generates consistent, steady income. The combination gives you a company with excellent cash flow and high margins. S&P Global has a 54% operating margin and $3.4 billion in free cash flow. Free cash flow is the money a company has left over after it has met its expense requirements -- lots of free cash flow indicates an efficient company with lots of money to invest in itself. Another sign of efficiency is return on equity (ROE), and S&P Global's ROE is extremely high at 74.7%.

With its diverse revenue streams, S&P Global has proven to navigate the market's ups and downs, as the businesses complement each other well. The proof of that is seen in earnings that have averaged 19% annual growth and a stock price that has gained about 26% annually over the last 10 years through Nov. 15. S&P Global's stock price is up 43% year to date and the company has not finished a year with a negative return since 2008.

More testament to its consistency is its dividend, which has increased annually for 48 straight years, making S&P Global a Dividend Aristocrat.

Given its competitive advantages, its leadership positions in multiple industries, and its diversity of revenue, S&P Global is a great stock to buy and hold for a long time.