An announcement could be coming as early as December.

Companies normally raise their dividend payments if they believe they can afford to distribute more of their profits to shareholders. And one company that has performed exceptionally well this year due to the success of its COVID-19 vaccine is Pfizer (PFE -0.68%).

The pharmaceutical company currently pays its shareholders a yield of 3.1%, which is well above the S&P 500 average of just 1.3%. But given that the company has done so well and is likely to continue its strong performance into 2022, should investors expect a big hike to its quarterly payments? 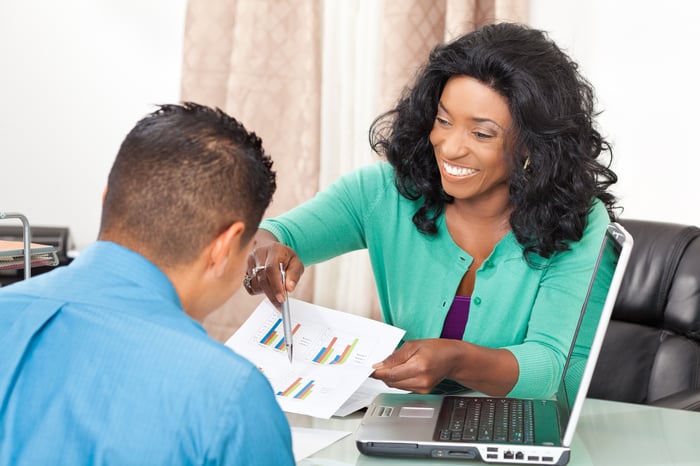 Today, Pfizer pays its shareholders a quarterly dividend of $0.39. That's barely higher than the $0.38 it was paying a year ago. It has been regularly increasing its payouts since 2010, so the company doesn't have the 25-year track record to be classified as a Dividend Aristocrat. But that doesn't mean that it won't announce a possible increase next month as it did a year ago.

Can Pfizer afford to raise its dividend?

There are a couple of ways to evaluate whether a company can raise its payouts: by looking at its cash flow or its net income. When Pfizer reported its quarterly earnings this month, its diluted earnings per share (EPS) of $1.42 was more than five times the $0.26 profit it reported during the same quarter last year. If it were to maintain that rate of profit, that would put its payout ratio at just 27%. It also raised its guidance for adjusted diluted EPS from a range of $3.95 to $4.05 to a range of $4.13 to $4.18. Based on those numbers, its payout ratio for the year would be 38%.

When looking at the company's cash position, Pfizer also seems to be in solid shape. Over the past 12 months, its free cash flow has totaled more than $29 billion. During the same period, it has paid $8.7 billion in dividends, accounting for just under 30% of that total.

The company certainly appears to be in an excellent position to be able to justify much more than a 3% hike for next year's dividend. Some companies might be cautious about making a significant increase to their payouts since they may not want to create the expectation of continuing to do so, especially if future years might not be as impressive.

But given that Pfizer has a COVID pill that is highly coveted and likely to generate significant revenue for the company next year, it seems unlikely that the business will suffer from a slowdown in 2022. And COVID could be an ongoing issue that requires booster shots indefinitely, so its vaccine will also likely remain in demand for the foreseeable future. The company's business is nearly 100% healthy as only its inflammation and immunology segment hasn't generated positive year-over-year growth this year.

Is a big dividend increase coming?

Investors should expect Pfizer to do something with its influx of cash this past year. Whether it's buying back shares (the company says it has made no repurchases in 2021) or raising the dividend, it's unlikely the company makes no move at all. One alternative to increasing its payouts is a special one-time dividend to reward its shareholders.

Given that the company doesn't appear to be aggressive with making buybacks, my bet is that it announces a generous rate hike to not just reward investors but to also show confidence in its future earnings. Even a 10% rate hike to a dividend of $0.43 would put the company's payout ratio at around 30% (based on quarterly EPS of $1.45). Such a significant increase wouldn't be overly restrictive should the company want to deploy its funds toward an acquisition. Thus, it would be surprising if Pfizer doesn't announce at least a double-digit increase next month.

Is now the time to buy Pfizer's stock?

Pfizer is a solid income stock to own. And with a nice bump up in the dividend likely coming soon, there's extra incentive to own the stock now; after such an announcement, the stock price could end up climbing higher. Year to date, Pfizer's stock has risen by nearly 40%, outperforming the S&P 500 and its 25% gains by a healthy margin. In addition, the company has raked in nearly $20 billion in net income so far in 2021, an increase of over 100% compared to last year. And there's little reason to expect these trends will change anytime soon.