Shares of computer memory maker Micron Technology (NASDAQ:MU) are marching higher as the week winds down Friday, topping 7% in 11:35 a.m. ET trading on the back of positive commentary from Wall Street. As Citigroup reports today, the price correction in DRAM "is drawing to a close." 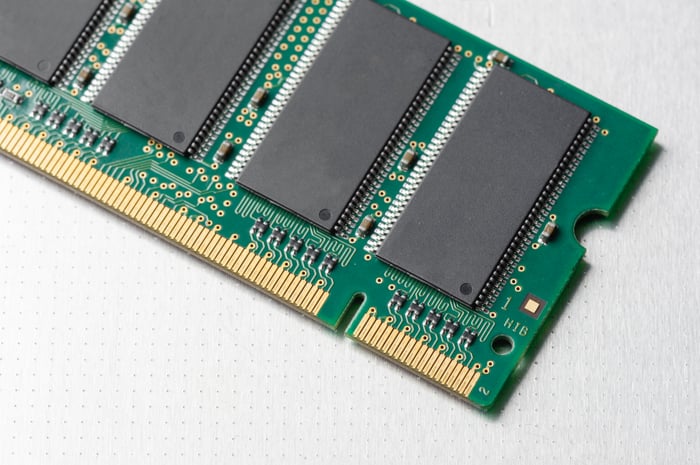 Citigroup made this pronouncement in a note covered on TheFly.com today, noting that higher demand for personal computers and servers is likely to boost demand for DRAM computer memory in Q4 2021 and into Q1 2022. The analyst thinks this will be a "positive catalyst" for Micron stock and thinks Micron is a buy at today's prices.

Nor is Citi the only one saying so. In a separate note from StreetInsider.com today, Evercore ISI is quoted as saying it's "game on for memory" as DRAM prices are likely to bottom out in the first half of next year. In Evercore's opinion, therefore, prices haven't quite bottomed out just yet, and that's part of the reason investors haven't returned to the sector yet -- and why computer memory stocks have underperformed other semiconductor stocks by as much as 44 percentage points over the past five months.

But that's just what makes stocks like Micron so attractive (in Evercore's opinion)! "Investors are generally eager to get back into memory," argues the analyst, but with prices still falling they're hesitant to buy. Once it becomes clear that prices have in fact hit bottom, however, the flood of investor dollars into stocks like Micron "will be fast and furious."

Long story short, buying Micron stock today might feel like buying early -- but it might also be the only way to ensure you catch the train before it leaves the station. It's at $82 and change today, but Evercore sees Micron stock trading up to $100 a share within a year -- a 21% gain -- and is making the stock one of its "top picks" for a 2022 rebound in DRAM prices.