This tech stock has started soaring, and it is unlikely to run out of steam.

GoPro's (GPRO 2.67%) stock price jumped nearly 8% after the company's third-quarter results -- released on Nov. 4 -- turned out to be much better than expectations, indicating that its recovery is firmly on track. The action-camera maker's revenue and earnings crushed Wall Street's estimates, driven by its ongoing transition to a direct-to-customer sales model that's leading to better margins, as well as its focus on creating a predictable revenue stream in the form of the subscription business.

More importantly, the small-cap stock's latest pop seems sustainable as GoPro is pulling the right strings to ensure consistent growth. Let's check out the reasons why buying GoPro shares right now may turn out to be a profitable move in the long run. 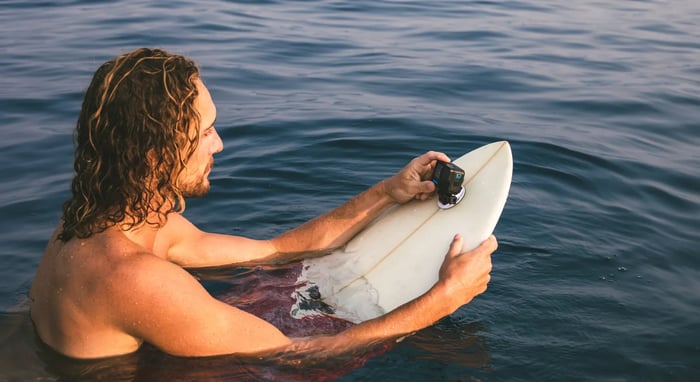 GoPro is headed in the right direction

GoPro's third-quarter revenue increased 13% year over year to $317 million, while non-GAAP net income increased to $0.34 per share from $0.20 per share in the year-ago period. Wall Street was expecting GoPro to earn $0.20 per share on revenue of $292 million, and the company easily cleared those estimates thanks to improved pricing power and the stronger contribution from the direct-to-consumer business.

GoPro sells its action cameras through retail partners and its website. The company saw impressive sales growth in both of these channels last quarter. Retail revenue increased 11.5% year over year to $222.3 million, accounting for 70% of the total revenue. Direct-to-consumer hardware sales increased to $80.2 million during the quarter, an increase of 6% over the year-ago period.

The company's subscription revenue increased from just $5.8 million in the year-ago period to $14.2 million last quarter. GoPro's subscriber count surged 168% year over year in the third quarter to 1.34 million, and the company believes that it is on track to finish the year with 1.7 million subscribers.

It is also worth noting that consumers are spending more money on GoPro's cameras. The street average selling price of its cameras increased 25% year over year in the third quarter to $381. GoPro points out that cameras with retail prices over $300 accounted for 98% of its camera revenue last quarter as compared to 83% in the third quarter of 2020.

The combination of higher prices and a stronger contribution from the subscription business gave GoPro's margins a big boost last quarter. Its adjusted gross margin jumped to 43.8% from 36.2% in the year-ago quarter. GoPro believes that it could sustain its stronger margin levels in the long run, pointing out on the latest earnings conference call that it sees the gross margin ranging between 40% and 43% in the future.

If GoPro continues to deliver strong subscriber growth numbers quarter after quarter, the higher-margin subscription business will move the needle in a bigger way and positively impact its margins.

GoPro stock has spiked impressively over the past month, hitting a market capitalization of nearly $1.75 billion, which isn't surprising given its latest results. 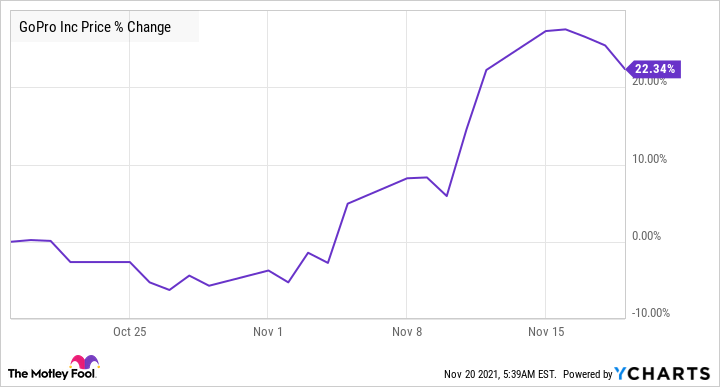 The good part is that the stock remains affordable despite this jump. GoPro trades at 10 times forward earnings. The stock has a price-to-sales ratio of 1.6. For comparison, the S&P 500 has a forward earnings multiple of 22. The index's price-to-sales ratio stands at 3.18, which means that investors looking to add a growth stock to their portfolios can lap up shares of GoPro at an attractive valuation right now.