The company is accelerating its investments into music and audio.

Spotify Technology (SPOT 3.75%) has rapidly grown its ambitions over the last few years. The company, which was originally just a music streaming service, is now trying to become the global leader in all audio streaming. With its third-quarter results released just a few weeks ago, Spotify has shown a lot of progress with these ambitions, but according to management, it is just getting started. Users continue to grow around the world, advertising revenue is rising due to the popularity of podcasts, and management just announced an acquisition to get a toe-hold into the audiobook market.

With the stock down 15% this year, now may be the perfect time to buy Spotify stock. 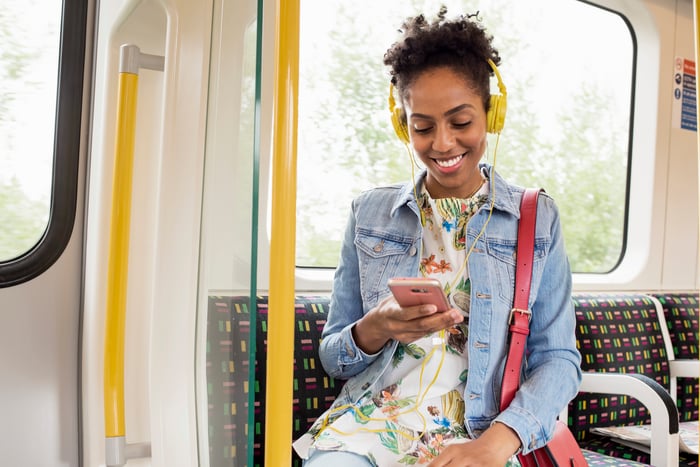 On Oct. 27, Spotify released its earnings results for the third quarter. All its core metrics performed better than management expected coming into the period, which shows the momentum the company is getting around the world. Revenue grew 27% year over year to $2.8 billion, while gross margin expanded from 24.8% a year ago to 26.7% in 2021. This helped Spotify generate over $100 million in free cash flow in Q3, even as the company reinvests heavily for growth in music, podcasts, and other audio formats.

User growth fell pretty much in line with revenue. Total monthly active users (MAUs) grew 19% year over year to 381 million. Management said the company is seeing strength in its "Rest of World" segment right now, with strong growth from countries like India, the Philippines, and Indonesia. Premium subscribers also grew 19% year over year in Q3 to 172 million, which shows how the company continues to convert its free users over to paid subscription plans at a high rate (premium subscriptions is where the company makes the majority of its money right now).

Spotify said it expects 2021 churn to be down from 2020. Decreasing churn in combination with growing subscribers is a recipe for creating a long-lasting business and shows the potential of Spotify's music subscription service.

The Q3 numbers highlighted the strength of Spotify's music subscription business, but the company's fastest-growing segment is advertising, which is being driven by the growth in its podcast advertising business. In Q3, advertising revenue grew 75% year over year to $366 million, with podcast revenue growing in the triple digits according to management's statements on the conference call.

Spotify has invested in many owned/licensed podcast shows over the last few years, including the No. 1 show in the world: The Joe Rogan Experience. It has also made two acquisitions of podcast distributors called Anchor and Megaphone to help it increase the podcast inventory it manages. To monetize these podcasts, Spotify launched the Spotify Audience Network (SPAN), which helps advertisers automatically connect with episodes that Spotify either owns or manages.

SPAN just launched this spring but has already grown the number of podcasts on its platform by 50%, and 1 in every 5 existing Spotify advertisers is using the service. If Spotify can succeed in building a digital advertising marketplace for podcasts, the company's advertising revenue should grow at a high rate for many years to come.

Music and podcasts are the two pillars of Spotify's existing business and should be able to drive growth for many years to come. However, with Spotify stating it wants to become a global audio platform, there are still different businesses it can get into. The next looks to be audiobooks.

On Nov. 11, Spotify announced it would be acquiring Findaway, a digital audiobook distributor. This business looks to be very similar to Megaphone and Anchor, helping audiobook owners publish once and distribute their audio to every platform listeners are on. In the press release, Spotify stated that the acquisition will help Findaway distribute audiobooks to the hundreds of millions of listeners on Spotify, which means that audiobooks are likely coming to the service soon.

How will Spotify make money on audiobooks? That has not been determined yet, but it will likely be as an add-on to Spotify's music subscriptions or through advertising on SPAN. Either way, it is another opportunity for Spotify to grow its earnings potential over the long term.

With a market cap just north of $50 billion, buying Spotify stock could be a smart move right now if you believe in the company's long-term ambitions to become a global audio platform. With the continued growth in music, an inflection in podcast advertising, and this recent move into audiobooks, the company is making rapid progress to fulfill this goal, which is good news for shareholders.